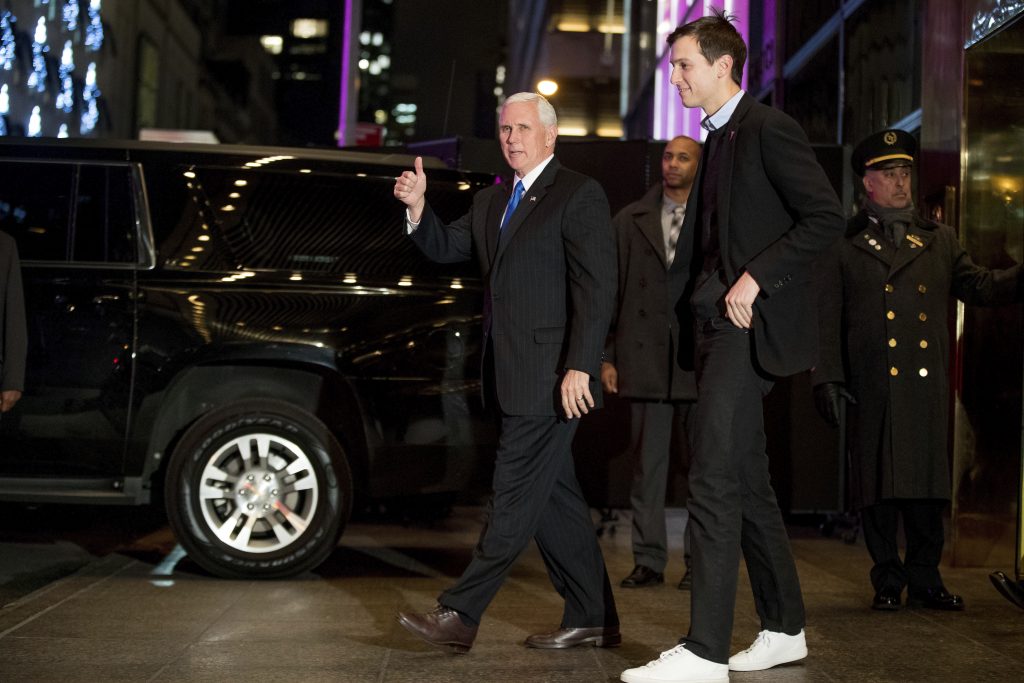 Trump has come to rely heavily on Kushner, who is married to the president-elect’s daughter Ivanka. Since the election, Kushner has been one of the transition team’s main liaisons to foreign governments, communicating with Israeli officials and meeting last week with Britain’s foreign minister. He’s also huddled with congressional leaders and helped interview Cabinet candidates.

His eligibility could be challenged. But Kushner lawyer Jamie Gorelick argued Monday that a 1967 law meant to bar government officials from hiring relatives does not apply to the West Wing. She cited a later congressional measure to allow the president “unfettered” and “sweeping” authority in hiring staff.

Kushner, who will not be taking a salary, will resign as CEO of his family’s real estate company and as publisher of the New York Observer, as well as divest “substantial assets,” Gorelick said. She said Kushner will recuse himself “from particular matters that would have a direct and predictable effect on his remaining financial interests.”

Ivanka Trump, who also played a significant role advising her father during the presidential campaign, will not be taking a formal White House position, transition officials said. She is the mother of three young children, and her immediate plans are focusing on her family’s move from New York to Washington, though officials said her role could change in the future.

Officials also said Ivanka Trump would be leaving her executive roles at the Trump Organization — her father’s real estate company — and her own fashion brands.

The anti-nepotism law has appeared to be the main obstacle to both Kushner and Ivanka Trump joining the White House. In arguing that the measure did not apply to the West Wing, Kushner’s lawyer cited an opinion from two federal court judges in a 1993 case involving Hillary Clinton’s work on her husband’s health care law.

Norman Eisen, who served as President Barack Obama’s government ethics lawyer, said there is a “murky legal landscape” regarding the anti-nepotism law. But he said Kushner appeared to be taking the proper steps regarding the ethics and disclosure requirements for federal employees.

Kushner, who turns 36 on Tuesday, emerged as one of Trump’s most powerful campaign advisers during his father-in-law’s often unorthodox presidential bid — a calming presence in an otherwise chaotic campaign. Soft-spoken and press shy, he was deeply involved in the campaign’s digital efforts and was usually at Trump’s side during the election’s closing weeks.

He has continued to be a commanding presence during the transition, working alongside incoming White House chief of staff Reince Priebus and senior adviser Steve Bannon. He’s played a key role in coordinating Trump’s contacts with foreign leaders and has been talking with foreign government officials himself, according to a person with knowledge of the conversations.

Kushner and Bannon have also worked closely on issues related to Israel, including discussions over moving the U.S. Embassy to Yerushalayim, which could inflame tensions in the Middle East, and on the Trump administration’s response to a United Nations Security Council measure condemning Israeli settlements.

Kushner is also weighing in on domestic policy, joining other Trump advisers Monday night for a meeting with House Speaker Paul Ryan, R-Wis., on tax reform. He championed the pick of his friend Gary Cohn, the president of Goldman Sachs, for a top White House economic post, though Cohn’s influence within Trump’s team is also said to be expanding.

Those with knowledge of Kushner’s role spoke on the condition of anonymity because they were not authorized to publicly discuss internal matters.

Like his father-in-law, Kushner pushed a mid-sized real estate company into the high-stakes battlefield of Manhattan. Though he is often viewed as more moderate than Trump, people close to him say he fully bought in to the Trump campaign’s fiery populist message that resonated with white working-class voters. He never publicly distanced himself from Trump’s more provocative stances, including the candidate’s call for a Muslim-immigration ban and his doubts about President Barack Obama’s birthplace.

Kushner’s place in Trump’s orbit — vital but often discreet — was vividly on display last month, when the president-elect toured the Carrier plant in Indiana to tout the jobs he says he saved.

Trump marched around the plant with Vice President-elect Mike Pence, shaking hands with workers, posing for photos and flashing his thumbs-up to the traveling press. Kushner stayed away from the cameras, lingering a deferential 10 or 20 feet from Trump while marveling at the scene.

“Look at these people,” Kushner was overheard saying as he watched dozens of workers cheer. “This is why he won.”