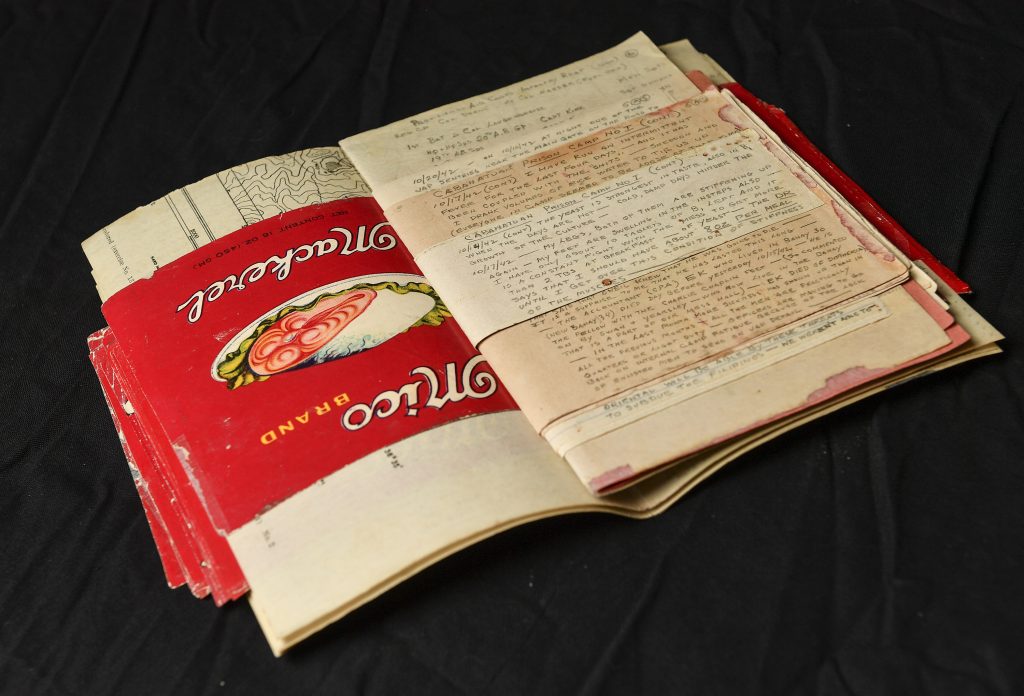 In September 1944, after two years of suffering in POW camps in the Philippines, U.S. Army Lt. George Washington Pearcy was being transferred to one of Japan’s “hell ships,” bound for captivity in the enemy’s home islands.

Before he left, he entrusted his diary to a fellow prisoner who was staying behind. Pearcy had written the diary on the backs of tin-can labels and other scraps of paper, and he wanted to make sure it survived him.

He gave it to Lt. Robert Augur, a friend who had lost a leg in the fighting at Corregidor in 1942 and who kept a small journal of his own.

Pearcy, 29, was killed a few weeks later when the prison ship Arisan Maru was torpedoed by an American submarine. Augur, 34, survived the war, made his way home, and brought his friend’s diary with him.

Now, almost 75 years later, the Library of Congress has acquired both men’s writings and posted them online, along with family correspondence.

The acquisitions tell a grim story of World War II prison life, the anguish of families back home and the determination of two men to preserve for history what they experienced.

Pearcy described fellow POWs, thin as skeletons, eating frogs and snails, and clad in rags, or in nothing at all. He noted the diseases he had – including malaria, chronic diarrhea, and beriberi, the debilitating result of vitamin B1 deficiency.

His life was filled with flies, lice, mosquitoes and death, as he was shuttled among prisoner-of-war camps and prison ships. He made toothpaste out of charcoal and powdered salt. He wore shoes that had no soles. He bathed in the rain and shaved with a knife.

Yet he tried to avoid foul language, read the Bible and made plans for the future.

To pass the time, he kept lists – of people he met, foods he ate, expressions he heard and things he wanted to do when he got home.

“Buy record player and start collection,” he wrote. “Buy complete set of pocket books to read in idle moments and going to and from work . . . Talk to Pop about buying farm . . . Write officers of Bataan Corregidor campaign and ask them to write back experiences – humorous, pathetic, realistic, and must be true.”

Japan attacked U.S. forces in the Philippines at the same time it attacked Pearl Harbor in December 1941. Most American and Filipino soldiers held out until the bastion of Corregidor fell in spring 1942 and its defenders, including Pearcy and Augur, were captured.

In June 1942, Pearcy recorded that he was in Cabanatuan Prison Camp No. 1, north of Manila, and stayed there until Oct. 25.

The detailed pages of his diary begin in October.

“I have run an intermittent fever for the last four days,” he wrote on the 17th. “And it has been coupled with [diarrhea] . . . My legs both of them are stiffening up again – my feet are swelling in the insteps.”

“The principal thing around here is the constant battle for weight,” he wrote. “You get sick for a few days and drop 10-15-20 pounds . . . that you can little afford to lose. It takes a long time to gain weight and only a short time to lose it.”

Pearcy was a diligent letter writer before the war broke out, and the acquisitions include numerous letters to his parents from the Philippines. The son of a prominent St. Louis attorney, he had a law degree from Washington University in St. Louis, according to the Library of Congress.

The library’s Veterans History Project received the Pearcy papers in December 2015 from relatives, the project’s senior reference specialist, Megan Harris, said. It was then the library’s only original POW diary from the Pacific theater, she said.

“By itself, it’s an extraordinary artifact,” she said recently.

When the project produced a blog post about the gift last February and mentioned Augur’s role, Augur’s family heard about it, recognized the connection, and offered his papers, too.

Harris immediately accepted, and the papers of both men were posted this fall.

Before his capture, Augur had been decorated for heroism in the fighting that cost him his left leg. In captivity, he jotted down in a small black book the names and home addresses of comrades, and in some cases their fates.

Next to Pearcy’s name, he penciled “J-abt 9/44,” denoting when Pearcy was shipped out for Japan.

Pearcy, for his part, used a pencil and wrote in tiny script on material that included labels of cans that had contained beans, chili con carne or mackerel.

“I have just come back from the [camp] hospital,” he wrote at one point. “It is still a depressing place. The whole area is so contaminated that it smells. And the smell of death is everywhere.”

“There are human skeletons and people you know are going to die,” he wrote. “There are little shower houses. . . . These are the ‘death houses’ or ‘St. Mary’s wards’ where people are put to die.”

Later in October, he was transferred to Bilibid prison, outside Manila, and from there began a harrowing, 11-day journey by ship to the Davao Penal Colony in the southern Philippines.

“All Americans getting filthy,” he wrote during the trip. “…… Can’t wash . . . Perspire . . . Men run around bare footed. Make themselves more prone to infection. Legs puff up. General infections and sores on body get worse.”

Aboard the boat on Halloween 1942, he noted:

“An officer (Lt. Fitzgerald) died in our lower bay today from heat exhaustion and general exhaustion . . . the men sat around and watched him die . . . Japs drop a small platform . . . through hatch and lift body out. All American troops stood at attention and saluted.”

He drew a picture of the ship, the Erie Maru, on the back of a letter he had received from his mother. “We have had no word from you since the war started,” she had written. “We are anxious to have you back and that day cannot come soon enough.”

Upon arrival at the penal colony, Pearcy worried about the delivery of his meager belongings: “I am afraid that some light handed person will get my musette bag which has my diaries in it, which I have spent so much time on.”

Pearcy did not report the kind of Japanese brutality that appears in other POW accounts. He found some guards to be reasonable, although a few were “regular sadists, and seem to get pleasure out of making the men as miserable as possible.”

He guessed the same kind of men could be found in the American army.

He remained at Davao through 1942 and 1943, and into 1944, much of the time hospitalized with malaria, bronchitis and dysentery. He appears to have returned to Bilibid prison in 1944.

In March 1945, after Augur was freed, he sent the diary to Pearcy’s parents, Frances and Claude Pearcy, in St. Louis.

He and Pearcy had been buddies, Augur wrote them. Before Pearcy was to board the ship to Japan, “George left a few of his papers with me and asked that I try to get them out for him.”

Augur warned Pearcy’s parents that, reading the diaries, they would see that “George has had a pretty rough time of it.”

He “was in poor condition at the time and should never have made the trip,” Augur wrote. But the enemy forced him, and many others, to go.

Augur thought Pearcy could make it.

“I do hope and pray that you have either already had word from him . . . or will soon have a message telling of his safe arrival,” Augur wrote.

Neither Augur nor Pearcy’s parents knew it, but Pearcy had been dead for five months.

The American submarine crew did not know that the Japanese vessel being targeted had 1,775 POWs, including Pearcy, on board when they sank the ship Oct. 24, 1944, in the South China Sea. Only a handful of men survived.

The Pearcys would not learn their son’s fate for seven months.

They continued to write to him via the authorities and send photos, hoping something might get through. They sent a snapshot of their house and a photo of his father smoking a pipe.

On May 25, 1945, Frances Pearcy filled out an official postcard to her son:

“We have heard of you from Augur [and others]. All assure us you have what it takes. Keep your chin up. Much love. Mother.”

Four weeks later, the War Department wrote the Pearcys that George he had been killed “by submarine action” in the sinking of the ship.

“It is with deep regret that I must notify you of this unhappy culmination of the long period of anxiety and suffering you have experienced,” the Army’s adjutant general wrote.

But in October 1945, two months after World War II ended in the Pacific and a year after their son had perished, the Pearcys received a delayed “Imperial Japanese Army” postcard from a Philippine prison camp.

It was signed, “George W. Pearcy.”