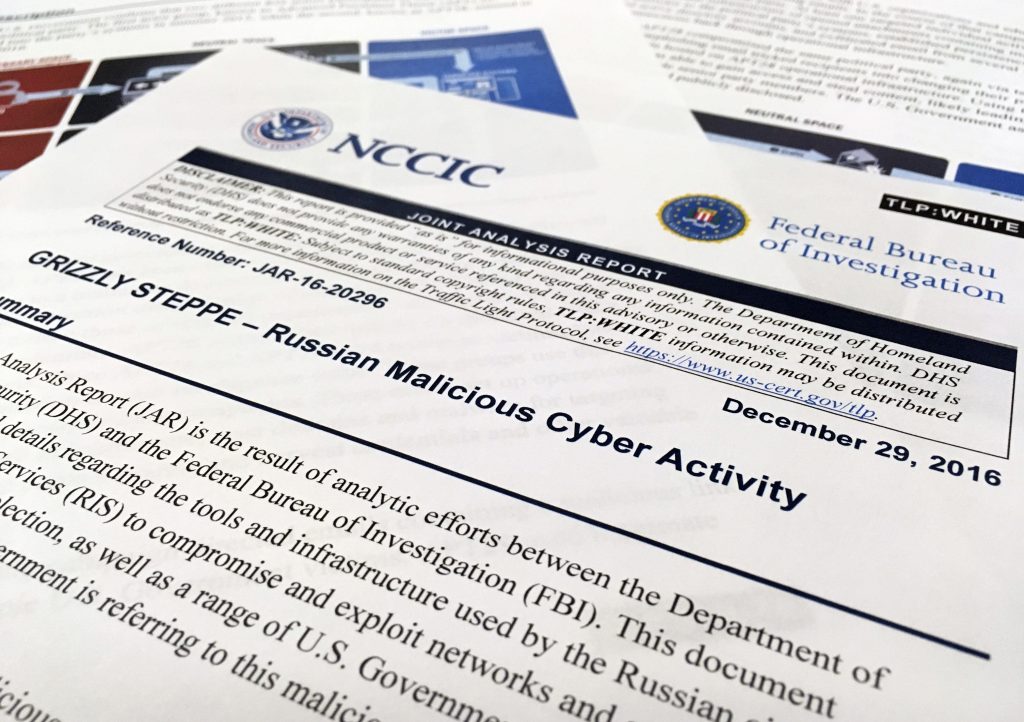 President-elect Donald Trump accepts the conclusion by U.S. intelligence agencies that Russia tried to interfere in the election that will soon put him in the White House, a top aide said Sunday.

“He’s not denying that entities in Russia were behind this particular campaign,” incoming chief of staff Reince Priebus said. “I think he accepts the findings.”

That’s more than Trump himself has said, and he hasn’t responded to calls for Washington to retaliate. Those are decisions, aides said, that Trump will make after he becomes president on Jan. 20, though he and some of his Cabinet nominees could face sharp questioning this week.

Intelligence officials allege that Moscow directed a series of hacks in order to help Trump win the White House in the race against Democrat Hillary Clinton. In the past, Trump has expressed skepticism about Russia’s role and declined to say whether he agrees that the meddling was done on his behalf.

On Friday, U.S. intelligence officials briefed the president-elect on their conclusions that the Kremlin interfered in the 2016 election on Trump’s behalf. Priebus attended along with Trump.

In an interview with The Associated Press after the briefing, Trump said he “learned a lot” from his discussions with intelligence officials, but he declined to say whether he accepted their assertion about Russia’s motives. Trump has said he warm relations with Russia are a good thing and that only “stupid” people would disagree.

“My suspicion is these hopes will be dashed pretty quickly,” Senate Republican Leader Mitch McConnell of Kentucky. “The Russians are clearly a big adversary. And they demonstrated it by trying to mess around in our election.”

An unclassified version of the report directly tied Russian President Vladimir Putin to election meddling and said that Moscow had a “clear preference” for Trump over Clinton. Trump and his allies have bristled at any implication that the meddling helped him win the election. He won the Electoral College vote with 306 votes, topping the 270 votes required to become president.

Accepting those findings would be a positive step, but not enough, said GOP Sen. Lindsey Graham of South Carolina, who is calling for more penalties against Russia.

“He’s going to be the defender of the free world here pretty soon,” said Graham, a frequent Trump critic. “All I’m asking him is to acknowledge that Russia interfered, and push back. It could be Iran next time. It could be China.”

Defense Secretary Ash Carter also called for a balanced response by the Trump administration that could be part cyber, part military.

“There has to be a response,” he said.

Trump hasn’t said whether he’s contemplating any response. Priebus and another Trump adviser, Kellyanne Conway, suggested Sunday that that is a decision to be made at a later date.

The developments come during a consequential week for Trump, who will become the nation’s 45th president on Jan. 20.

On Wednesday, Trump is expected to hold a long-delayed news conference on how he’s organizing his global business empire to avoid conflicts of interest while he’s president. He has taken sporadic questions and done interviews, but it’ll be his first full-fledged news conference since July 27.

Beginning Tuesday, the Senate is to hold the first of at least nine hearings this week on Trump’s Cabinet picks — a pace set by the Republican majority. Democrats have complained that it’s too fast. The government ethics office says several of Trump’s choices have not completed a full review to avoid conflicts of interest.

Trump has tried to play down the allegations against Russia, alarming some who see a pattern of skepticism directed at U.S. intelligence agencies and a willingness to embrace Putin.

On Friday, after receiving a classified briefing on the allegation against Russia, Trump tweeted that the actual votes had not been tampered with. “Intelligence stated very strongly there was absolutely no evidence that hacking affected the election results. Voting machines not touched!” and “Only reason the hacking of the poorly defended DNC is discussed is that the loss by the Dems was so big that they are totally embarrassed!”

He then declared in a series of tweets Saturday that having a good relationship with Russia is “a good thing, not a bad thing. Only ‘stupid’ people, or fools, would think that it is bad!”

Previously, when asked about the allegations of Russian meddling, Trump had responded by saying we should “get on with their lives.” Graham took issue:

“Our lives are built around the idea that we’re free people. That we go to the ballot box. That we, you know, have political contests outside of foreign interference,” said Graham.

There has been no official comment from Moscow on the report.

An unclassified version of the intelligence report said the Russian government provided hacked emails from the Democratic National Committee and Clinton’s campaign chairman, John Podesta, to WikiLeaks. The website’s founder, Julian Assange, has denied that it got the emails it released from the Russian government. The report noted that the emails could have been passed through middlemen.

Russia also used state-funded propaganda and paid “trolls” to make nasty comments on social-media services, the report said. Intelligence officials say Moscow will apply lessons learned from its activities in the election to put its thumbprint on future elections in the United States and allied nations.

The public report was minus classified details that intelligence officials shared with President Barack Obama on Thursday.

Priebus appeared on Fox News. Carter and Graham were on NBC, and McConnell was on CBS.