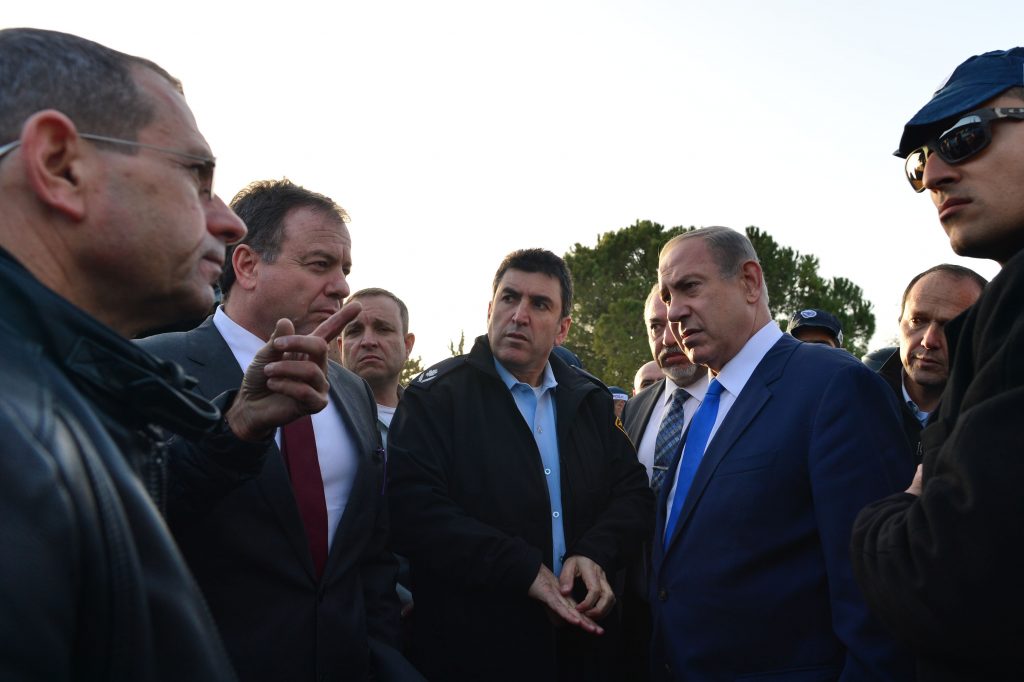 The initial evidence in Sunday’s truck ramming that killed four Israeli soldiers and wounded 16 others points to the perpetrator being a supporter of Islamic State, according to a statement made by Israeli Prime Minister Binyamin Netanyahu.

“We know the identity of the attacker, and according to all the signs he is a supporter of Islamic State,” Netanyahu said Sunday at the scene in Armon Hanatziv, Yerushalayim. He said there may be a connection between this attack and similar attacks recently in France and Berlin. “We are fighting this plague, and will defeat it,” he said.

The terrorist, who was killed at the scene by an IDF soldier, was identified as Fadi al-Qanbar, 28, from the adjacent east Yerushalayim neighborhood of Jebl Mukaber. He was married with four children, and had served time in Israeli prison.

Netanyahu announced that Jebl Mukaber was cordoned off following the attack, and that “we are taking other actions that I will not detail here.”

Israel Police Commissioner Roni Alsheich said there had been “no prior warning” that such an attack was imminent.

The Jewish neighborhood of Armon Hanatziv has been the target of numerous acts of violence, including fire-bombings and rock-throwing, over the past 15 months. In October 2015, two local residents were killed by Jebl Mukaber terrorists. A wall erected between the two areas for security was subsequently torn down due to protests from human rights groups and left-wing politicians who condemned it as collective punishment that violated the rights of law-abiding Arab residents in the area.

Netanyahu was scheduled to convene a meeting of the security cabinet later in the day.

No group immediately claimed responsibility for the attack, but the Izz Ad-Din Al-Qassam Brigades — Hamas’ military wing — praised it as “heroic.”

Condemnations of the murder and condolences for the families came in from Israel and abroad.

Shortly after the news broke, U.S. Ambassador to Israel Dan Shapiro posted: “I strongly condemn the terror attack in Yerushalayim in which IDF troops were killed. Condolences to the families of the deceased and prayers for recovery to those injured.”

Similar sentiments were expressed by the U.K. ambassador to Israel, the Australian envoy, the United Nations Special Coordinator for the Middle East Peace Process, the ambassador of the European Union in Israel, the French foreign minister, the foreign minister of Norway and New York Governor Andrew Cuomo, all among the first to respond with statements.

“This was an atrocious, painful, and especially serious attack which could lead to other copycat attacks,” Erdan said. “We will not allow this vile terrorist or his family to hold a funeral where he is treated with honor, encouraging other attacks.

“His body will be buried but only by the security forces and in a place to which the family and his supporters will not have access.”