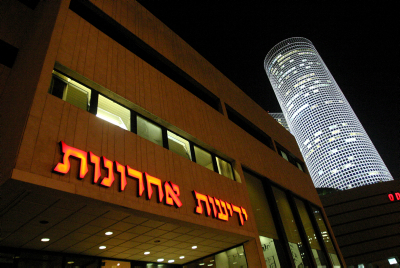 The senior business official questioned in a second corruption case against Prime Minister Binyamin Netanyahu is none other than Arnon (“Noni”) Mozes, the publisher of daily newspaper Yediot Achronot, Channel Two reported Sunday. Mozes is the central figure in the “2000 case” against Netanyahu, and is the person who was recorded in an exchange with Netanyahu on favor trading that was reported earlier Sunday by Haaretz.

The report did not say whether Netanyahu was to pressure Yisrael Hayom to close down, or to try and persuade it to start charging money, or to propose a Knesset bill to force it to charge, as Labor MKs tried to do several years ago. A report on Channel Ten quoted Mozes as telling Netanyahu that, if he agreed to the deal, “I will spoil you with positive coverage. I need your help with the Yisrael Hayom law” to force the paper to charge money. Netanyahu reportedly responded that “things will work out.” According to Channel Two, Mozes himself recorded the conversation.

According to Channel Ten, it was actually Netanyahu who asked for the meeting, in which he beseeched Mozes not to publish a story about his son Yair. Mozes then presented the deal to Netanyahu, who supposedly agreed.

Mozes was trying to halt a plan by Yisrael Hayom to begin publishing an expanded weekend edition, which he felt would badly hurt sales of the Friday paper, from which Yediot derives most of its income. According to the report, Mozes told senior staff of the deal and said that Netanyahu would see to it that the expanded Yisrael Hayom edition would not come out. In the end, however, the deal either fell apart, or was never implemented, as Yisrael Hayom did publish its expanded edition. In retaliation, Yediot redoubled its attacks on Netanyahu.

Neither of the newspapers said to be involved have commented on the story. Speaking at Sunday’s cabinet meeting, Netanyahu said that he was familiar with the material, and that there was nothing to it. “Unfortunately I cannot share details at this time, but what I can say with full confidence – and I know what I am talking about – is that there will be nothing because there is nothing. The only thing going on is the unceasing pressure of the media on law enforcement. They are blowing up balloons with hot air, one after another. The same thing is happening now. I would suggest that the opposition not celebrate yet, because there is nothing to celebrate. If they want to change the government, they need to do it at the ballot box.”