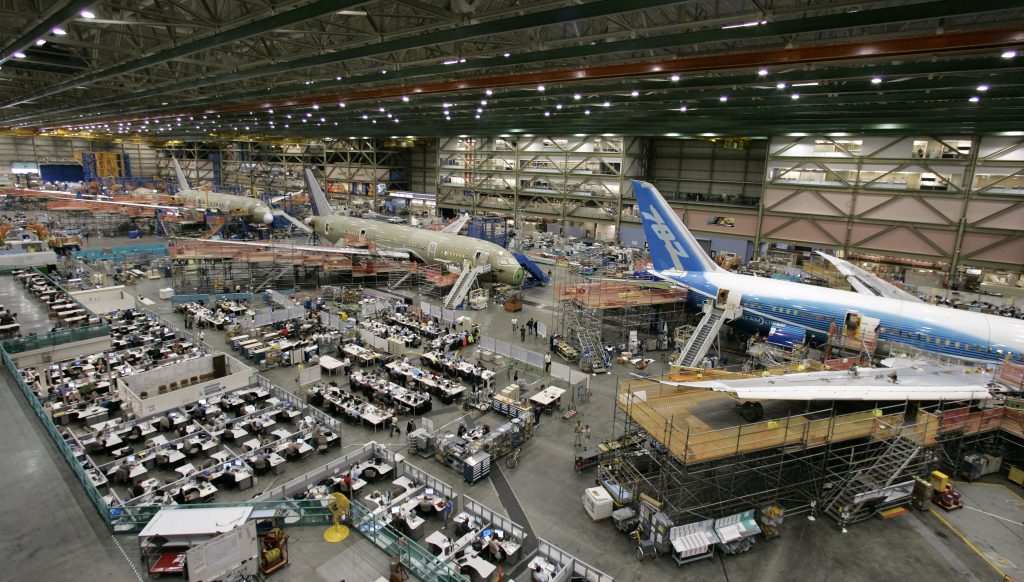 Boeing delivered 748 jets last year, fourteen fewer than in 2015, but still enough to leave it well ahead of rival Airbus in 2016 production.

However, overall sales for the year slumped despite a year-end rush that saw it book 202 net orders in December, according to data released Friday.

In a message to employees Friday, the new chief executive of Boeing Commercial Airplanes, Kevin McAlister, discussed a series of milestones achieved during the year.

He cited the first flight of the 737 MAX and its international debut at the Farnborough Airshow in England; the delivery of the five hundredth 787 Dreamliner and in South Carolina the start of final assembly of the latest Dreamliner model, the 787-10; and the opening of the 777X Composite Wing Center in Everett, Wash.

At list prices, the total value of Boeing’s 2016 net orders would be $94 billion. According to market pricing data from aircraft valuation firm Avitas, the real value after standard sales discounts is estimated at about $44 billion.

The fact that the 668 jet sales total lags the 748 jet delivery total means that Boeing’s backlog of unfilled orders drops by eighty, the first time it’s fallen in seven years.

Airbus won’t release its corresponding order and delivery figures until later this week, but as of the end of November its deliveries lagged Boeing’s by more than 100 jets, so it’s clear that it won’t match the U.S. plane-maker’s output.

Airbus has struggled this year to meet its planned deliveries, beset by issues with the supply of Pratt & Whitney engines for its new A320neo jets and also with shortages of seats and other cabin interior parts.

Of the planes Boeing delivered last year, 490 were the smaller 737 narrow-body jets assembled in Renton, Washington.

The slight dip in overall production compared to 2015 was largely due to the rate cut in the 747 jumbo jet program. Boeing in 2016 delivered only nine 747s, exactly half the number delivered the previous year.

Boeing’s assembly plant in North Charleston, S.C., built 61 Dreamliners, according to Uresh Sheth, who tracks 787 production on the “All Things 787” blog.

That means the South Carolina site is running at its full planned rate, building five 787s per month to Everett’s seven per month for a current total of 12 Dreamliners per month.

Boeing had said it was considering going up to 14 Dreamliners per month toward the end of the decade, with seven jets built at each site, but lack of new sales now makes that unlikely.

Indeed, several analysts, including industry observer Scott Hamilton, believe Boeing may have to drop the production rate back down to 10 Dreamliners per month.

If that happens, it’s likely Boeing will balance production with five jets made at each assembly site — meaning that North Charleston maintains its current rate while Everett loses two jets per month.

The outlook for 2017 is gloomier for Everett production and also projected sales.

Boeing will cut 777 production in Everett this year in response to slow sales of the current model ahead of the debut of the replacement 777X. It will deliver nearly thirty fewer of the expensive big jets than last year.

In contrast, Renton should see more work, with a planned rate hike on the 737 to forty-seven jets per month from the current forty-two per month.

Airplane sales in 2017 are expected to continue at a low level as the airline industry worldwide faces a capacity glut.

Yet, there will be important milestones for Boeing Commercial Airplanes in the year ahead.

In his employee message, McAlister said he’s looking forward to the first 737 MAX delivery, the MAX 8 model, as well as the rollout and first flight of two new airplane models, the 737 MAX 9 and 787-10.