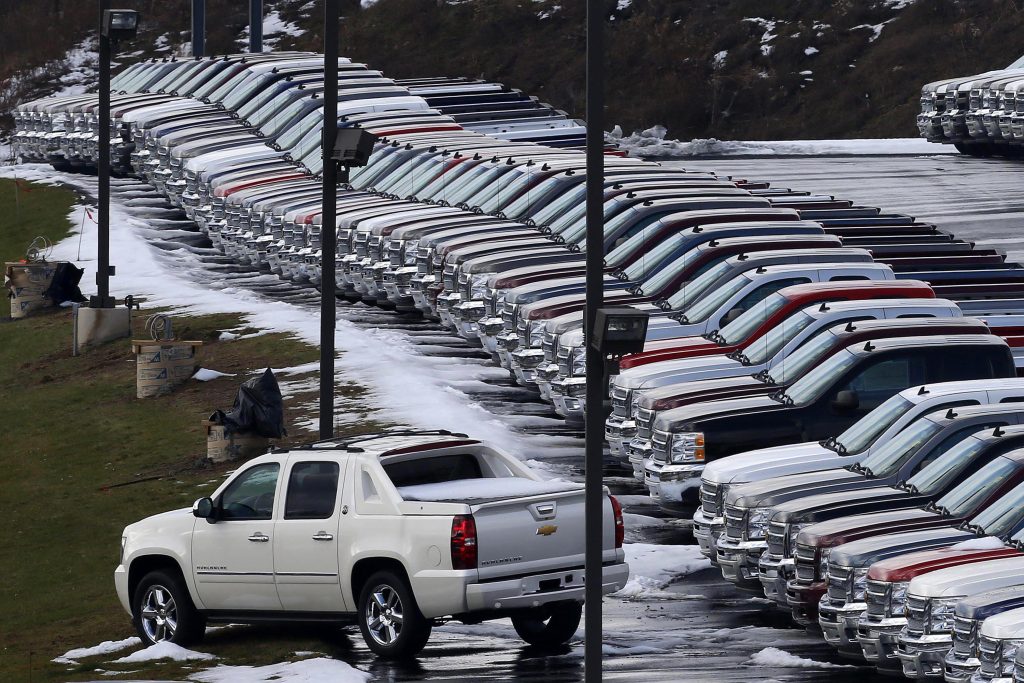 U.S. consumers bought a record number of new cars and trucks in 2016. A repeat performance in 2017 could be a tall order.

U.S. vehicle sales totaled 17.55 million, beating the previous year’s record of 17.47 million, according to Autodata Corp. It was the seventh consecutive year of year-over-year sales gains, an unprecedented string, said Tom Libby, an analyst with the consulting firm IHS Markit.

That string could be in jeopardy, however. The National Automobile Dealers Association expects U.S. sales to drop to 17.1 million vehicles in 2017 as interest rates and vehicle prices rise. Large numbers of cars coming off leases will hit the used-car market next year, putting pressure on new car sales. And more buyers are opting for longer loans, so they won’t be returning to dealerships anytime soon.

Political issues could also impact sales. President-elect Donald Trump has threatened to impose a 35-percent tariff on vehicles made in Mexico and exported to the U.S., which would impact every major automaker. But he also has promised more spending on infrastructure, which could boost pickup truck sales.

“It is the year of unknowns,” said Michelle Krebs, a senior analyst with the car buying site Autotrader.com.

General Motors Co. said its year-over-year sales were down 1.3 percent to just over 3 million cars and trucks. That was partly because the company cut back on low-profit sales to rental-car firms. Toyota Motor Corp.’s full-year sales fell 2 percent to 2.4 million. Volkswagen brands sales dropped 8 percent to 322,948, hurt by the company’s diesel mileage cheating scandal.

Winners and Losers: Ford’s F-Series pickup remained the best-selling vehicle in America in 2016, with 820,799 trucks sold. That’s the equivalent of 93 trucks sold every hour. The Toyota Camry was the best-selling car, despite a 9.5-percent dip in sales to 388,618. Jaguar saw the biggest sales increase of any brand, with sales more than doubling over 2015 thanks to its new XE sedan. Fiat Chrysler’s Italian brands, Fiat and Alfa Romeo, declined more than 20 percent each as customers scratched small cars off their shopping lists in favor of SUVs.

Luxury Crown: Mercedes-Benz held onto its title as the top-selling luxury brand. Mercedes sales were up less than 1 percent to 374,541, edging BMW and Lexus.

SUV Takeover: Toyota’s U.S. sales chief, Bill Fay, said consumers’ shift from cars to SUVs is one of the most dramatic the industry has ever seen. Three years ago, trucks and SUVs represented 50 percent of the U.S. market. They closed 2016 at 63 percent of total sales, and analysts don’t see that changing anytime soon. Boomers and Millennials both like the space SUVs offer and their higher ride, and improvements in fuel economy make them competitive with cars. The Honda CR-V was the best-selling SUV in the U.S. last year, with sales up 3 percent to 357,335.

Piling on the Deals: Incentive spending reached a record of $4,000 per vehicle in November before falling a bit in December. Buyers were walking away with thousands of dollars in bonus cash or financing deals. Autotrader said Ford was offering as much as $13,000 off its C-Max plug-in hybrid in certain markets in December. But the deals can hurt the industry in the long term, since they damage vehicles’ resale values and automakers’ profits. Automakers, wary of relying too heavily on incentives to move vehicles, started cutting production in the fall. Even with incentives, the average sale price of a vehicle rose to $32,000, a record for December, LMC said.

December to Remember: Year-end promotions and elevated incentives boosted sales 3 percent to 1.7 million, Autodata said. But even if sales had been flat compared to last December, 2016 would have broken a record. Volkswagen’s sales jumped 20 percent over last December, while Subaru sales rose 12 percent. GM and Nissan both gained 10 percent. Honda’s sales rose 6 percent and Toyota’s rose 2 percent. The Nissan Rogue SUV was one of the month’s stars, with sales up 53 percent as an updated version hit the market.