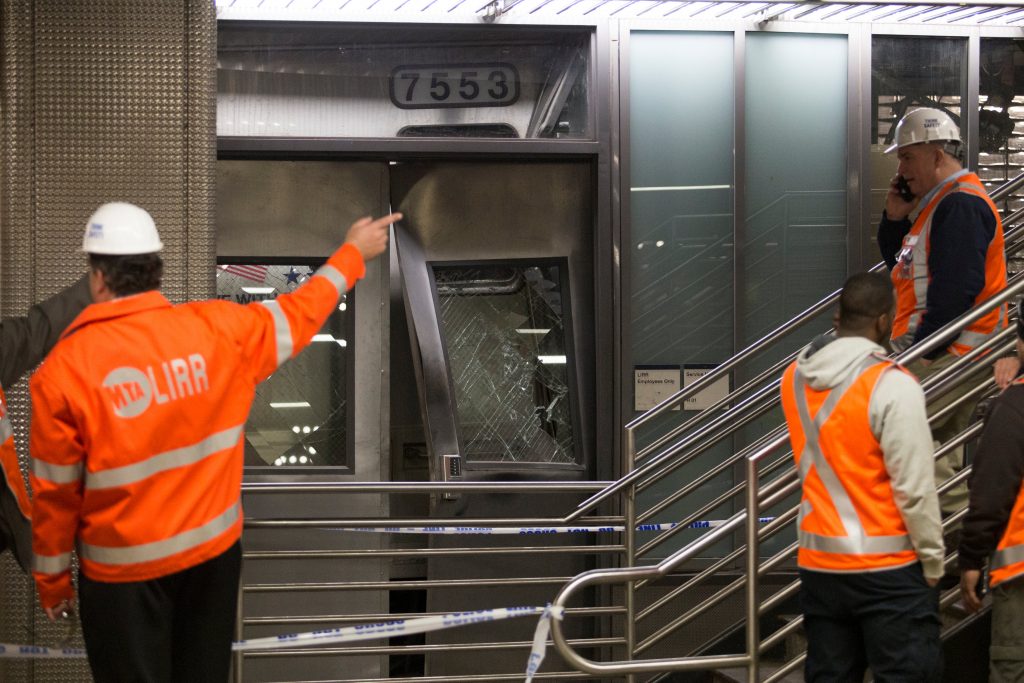 While none of the injuries were life-threatening, at least 11 people were sent to the hospital, Deputy Assistant Chief Dan Donoghue said at a briefing at the crash site. Between 600 and 700 people were on the train, he said.

The train, arriving from the Queens neighborhood of Far Rockaway, failed to stop on time. Traveling at a fairly slow speed, it derailed after striking a bumping block, New York Governor Andrew Cuomo said at the briefing.

About 103 people were injured, the fire department said in a Twitter message. The front two cars of the six-carriage train were severely damaged. The station’s partitions and bumping block, which prevents railway vehicles from going past the end of a section of track, were also damaged.

Passengers said the blood and chaos following the derailment was frightening.

“There were people crying,” said Aaron Neufeld, a 26-year-old paralegal who commutes on the rail line daily. “I saw some bloody faces.”

Neufeld, who was riding in the second car, said the train appeared to be approaching normally until it crashed, knocking passengers on top of one another and shattering glass windows.

“Bags went flying,” he said. “People were thrown to the ground.”

The engineer was probably responsible for failing to stop the train before it hit the bumper, said Tom Prendergast, chairman of the Metropolitan Transportation Authority, the agency that runs the railroad.

The train was traveling between 10 and 15 miles per hour as it approached the bumper, he said, which is standard.

“At that speed, it’s pretty much the locomotive engineer’s responsibility to stop the train,” Prendergast said as he stood beside Cuomo at the briefing. Investigators will interview the engineer, the conductor and brakeman to determine the cause of the accident, he said.

There were no major service disruptions for other Long Island Rail Road lines at the terminal, an MTA official said. Earlier, officials said crews were working to restore service at the terminal by the evening rush hour.

In late September, a New Jersey Transit train crashed into a terminal in Hoboken, New Jersey, killing one woman and injuring 114 people, including the engineer.

Cuomo, who has made infrastructure improvements a centerpiece of his agenda, said Wednesday’s incident was minor in comparison. The most serious injury in the crash was a broken leg, he said.

“There was extensive damage in Hoboken,” Cuomo said. “That train was coming in much faster, did much more damage.”

The U.S. Federal Railroad Administration and the National Transportation Safety Board said they were sending investigators to the scene.

The Long Island Rail Road is the United State’s largest commuter rail system, serving more than 330,000 passengers a day, according to the American Public Transportation Association.

Atlantic Terminal, which also connects commuters to nine city subway lines, is one of the busiest New York stations.