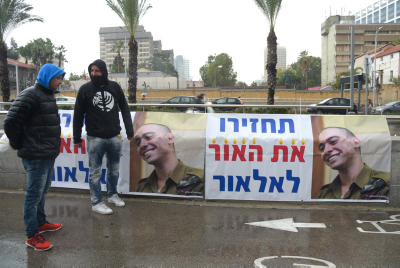 Anger and rage greeted the decision rendered by a military court Wednesday in the case of Elor Azaria, with a panel of three judges unanimously deciding that he was guilty of manslaughter, insubordinate behavior and conduct unbecoming a soldier. In the shooting incident last Purim, he killed a terrorist who had been neutralized already, after he had attacked IDF soldiers with a knife. Attorneys for Azaria said that they would appeal the decision, and MKs – not only on the right – called for an immediate pardon for the soldier.

The court began reading the verdict in the case, which had been going on for over six months, at 10 AM, and finally announced that it found Azaria guilty nearly three hours later. Already at the beginning of its remarks, the court indicated that it considered Azaria at fault for shooting the terrorist who lay on the ground, and that it rejected his claim that he had shot the terrorist because he feared that the stabber would set off a bomb that he may have had hidden on his person. The court said that Azaria had lied about his intentions, and that he had changed his version of events five times during the course of the trial.

The court banned photographers and news media from broadcasting directly from the courtroom, but word of the proceedings inside leaked out. Angry demonstrators denounced the court and the IDF General Staff, especially Chief of Staff Gadi Eisenkott, who was accused of being against Azaria from the start. Demonstrators moved from Defense Ministry headquarters in central Tel Aviv to the nearby Ayalon Freeway, closing it for about a half hour. At least four people were arrested. Inside the courtroom, meanwhile, tensions were high, and numerous people, including family members, were ejected for shouting at the judges.

Attorneys for Azaria said that they were “very disappointed” by the verdict, but urged the public to work with the system while they prepared an appeal. Speaking outside the courtroom after the session was adjourned, attorney Ben Malcha said that “unfortunately the court clearly sided with the prosecution. The final word has not been said.”

“We listened to the lengthy verdict, and it is very disappointing in every point of defense we presented,” said attorney Ilan Katz. “We claimed from the beginning that the court took the prosecution’s side. We respect the court’s verdict, and we will make our complaints heard in the appropriate places. I have no doubt that we will prevail in an appeal, given the gaps between the the evidence and the decision.” The attorneys have asked the court to hold hearings on the penalty phase of the trial as soon as possible, in order to speed along the appeals process.

Meanwhile, politicians on the right and the left called for Defense Minister Avigdor Liberman to pardon Azaria. Jewish Home chairman Naftali Bennett said that “Elor killed a terrorist whose purpose was to murder soldiers. This should never have even been an issue for a criminal case. I expect the Defense Minister to immediately, today, pardon Elor in order to give IDF soldiers the backing they need to do their job.” Former MK Sharon Gal, who has been a supporter of the family from the beginning, said that “the court stuck a knife in the back of a top soldier. We will appeal, but he should be pardoned immediately.” Interior Minister Rabbi Aryeh Deri said that “the court has done its job, and we will respect its decision. From this point on, the proper path would be to pardon him. The trial was enough suffering for this soldier.” Zionist Camp MK Shelly Yechimovich also called for Azaria to be pardoned, saying that “the decision in this case was necessary, but we must consider a pardon for the soldier, given the social implications and divisions this decision has the potential to cause.”

Commenting on the outcome, Liberman said that the decision was “a difficult one to absorb, but the most important thing is to respect the decision of the court. We all must remain calm. Despite the difficult decision, we will provide all the support we can for the soldier and his family. I call upon all public figures to stop their insults of the court and the defense establishment, and especially the Chief of Staff. He works day and night to ensure the security of Israel. All of the insults aimed at him over this issue are completely inappropriate.”