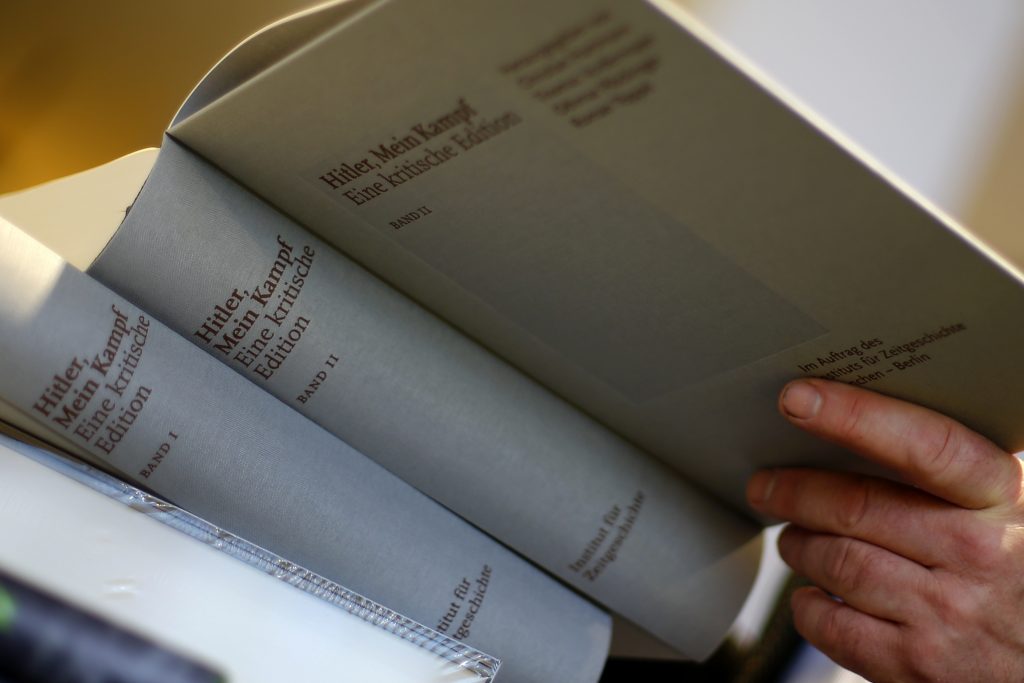 An annotated edition of Mein Kampf, Adolf Hitler’s notorious manifesto, has become a non-fiction best-seller in Germany. However, those who have followed the matter were dismissive of the high sales as evidence of sympathy for the book’s incendiary messages.

Some 85,000 copies of the book have been sold since it was first published a year ago, according to the Munich-based Institute for Contemporary History. The publisher spent years adding comments to Hitler’s original text in an effort to highlight his propaganda and mistakes.

Rabbi Joshua Spinner, executive vice president and CEO of the Berlin-based Ronald S. Lauder Foundation, told Hamodia that while anti-immigrant sentiment has led to concerning trends in Germany today, he did not feel sales of Mein Kampf “reflect those trends.”

“Although sales are relatively high, we are speaking of an expensive, annotated, almost academic edition that is probably at least in good part being purchased by libraries, institutes, universities and schools. This is not a paperback flying off the shelves in street bookstores,” he said.

The bulky two-volume edition, titled Hitler, Mein Kampf: A Critical Edition, weighs in at 1,948 pages and costs a hefty 59 euros ($62). It was the first version to be published in Germany since the end of World War II.

Before the copyright on Mein Kampf, held by Bavaria’s state Finance Ministry, expired at the end of 2015, the ministry had used it prevent the publication of new editions in the country.

Despite its incendiary and anti-Semitic content, the book wasn’t actually banned in Germany and could be found online, in secondhand bookshops and in libraries.

As plans to release the annotated version were announced the idea met opposition, due to fears that it would be used as fodder by neo-fascist elements in Germany.

Holocaust scholar Dr. Michael Berenbaum told Hamodia that he doubted banning a print edition would do much to keep Mein Kampf away from those who identify with its ideology, and he felt that the decision to reprint it only with clear annotations was “very responsible.”

“That it’s being read is just a phenomenon of note. To know anything about what it means you have to know who’s reading it,” he said. “There are three ways to read Mein Kampf: with horror, with radical amazement that anybody could believe such [unbelievable claims], or with adoration. There is value in studying it; we just hope it is not being read by people saying, ‘Yes, mein Fuhrer.’”

“On the contrary, the discussion about Hitler’s worldview and how to deal with his propaganda offered the opportunity to look at the disastrous roots and consequences at a time when authoritarian political ideas … are again gaining followers,” Andreas Wirsching, the Institute’s director, said.

German authorities have made clear that they will not tolerate new versions without annotations.

“The best possible outcome is for this and other such materials to be available and proven irrelevant by contemporary German society,” said Rabbi Spinner. “Indifference to the message is far more powerful a tool for battling radicalism than prohibition. So let’s hope that indifference is what we ultimately get.”