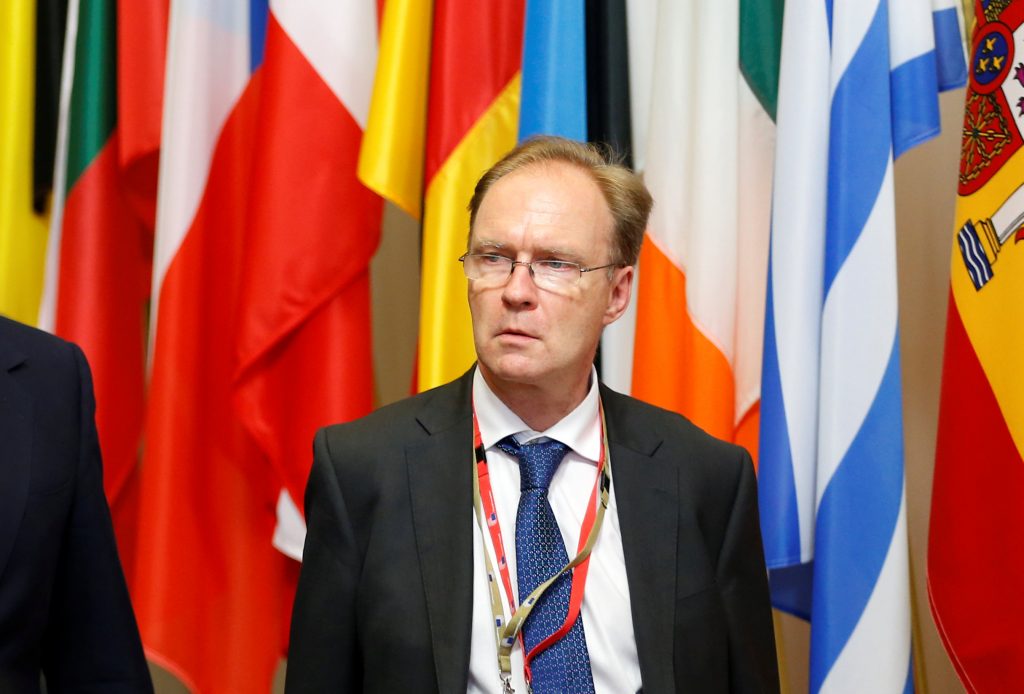 Britain’s top diplomat at the EU quit his post with a blistering attack on the government, giving voice to what several sources say is wider frustration among officials over Prime Minister Theresa May’s Brexit strategy.

The early resignation of envoy Ivan Rogers means that London will now launch its negotiations to leave the EU without the guidance of one of its foremost experts on Europe.

And his letter to staff, which was leaked to the media, included unmistakable criticism of the government’s approach, straining the rules that have shielded the politically neutral civil service from elected leaders for generations.

Brexit supporters said his words were little more than sour grapes from an opponent of leaving the EU, and his departure would pave the way for a more enthusiastic champion of government policy to take over as envoy to Brussels.

Rogers, a top official for more than 20 years, said in his letter that May’s negotiating objectives were as yet unknown. He told his staff to “never be afraid to speak the truth to those in power.”

“I hope you will continue to challenge ill-founded arguments and muddled thinking,” he wrote.

May intends to launch the two-year process of negotiating to leave the bloc by the end of March, beginning what is expected to be some of the most complicated international talks Britain has engaged in since World War II. The prime minister has so far said little publicly about Britain’s negotiating position, arguing that to do so would weaken London’s hand in talks.

Her political opponents say the government underestimates the task and has failed to take into account the position of European leaders, who say they will not give Britain access to the EU free trade zone if it closes its borders to EU citizens.

A spokeswoman for the British prime minister declined to comment on what she called “a private email to staff.”

Rogers called on employees at Britain’s mission in Brussels, used to leading Britain’s negotiations in the EU, to work more closely with a new government department which May has set up in London to coordinate policy over Brexit.

He said many of his around 130 staff felt “uncertainty” over their roles but hoped that by stepping aside for new leadership before the talks begin, he would “help produce earlier and greater clarity on the role that UKREP should play.”

UKREP, or the U.K. Representation to the EU, is not alone in feeling uncertainty – several different departments are concerned over how they will contribute their experience, often in very specific policy areas, to the talks.

With May’s end of March deadline to trigger the formal EU divorce procedure approaching, her reticence over her strategy may be contributing to a lack of coordination among staff in government departments, say experts on the British bureaucracy.

Robyn Munro, senior researcher for the Institute for Government which is close to the civil service, said there were questions over what kind of structure Britain would put in place to manage the negotiations.

Rogers’ departure split opinion almost as evenly as June’s referendum on EU membership, with pro-EU lawmakers suggesting Britain would lose much-needed expertise, while those who campaigned to leave welcoming his exit.

EU diplomats said Rogers had given no firm indication in recent months that he would quit.

A spokeswoman for the European Commission said it regretted “the loss of a very professional, very knowledgeable while not always easy interlocutor and diplomat who always loyally defended the interest of his government.”

But the future of Rogers looked precarious late last year when a report was leaked that he had told ministers that a post-Brexit trade deal with the EU could take 10 years to finalize. Prominent euroskeptics in May’s Conservative Party accused him of being overly “pessimistic” before the talks.

One source in parliament said Rogers had been victim of a breakdown in relations not just with ministers, but within the civil service after the new Department for Exiting the EU took precedence over his Brussels-based mission.

Other diplomats said Rogers, who had been central to a difficult renegotiation of the terms of Britain’s EU membership led by former prime minister David Cameron before last year’s referendum, was frustrated that his message that the talks would be tough was not getting through.

But pro-Brexit lawmakers said it was right that officials who lacked enthusiasm for quitting the EU should step aside.

“Some have been passionately committed to the previous pro-EU consensus and they are in real grief, like many others we know. If they cannot adapt to the new policy, then they are right to go,” said Conservative lawmaker Bernard Jenkin, who campaigned for Britain to leave the European Union.

While acknowledging that civil servants are not supposed to allow their personal beliefs to influence their work, Jenkin told Reuters he would not go so far as to say May should appoint a pro-Brexit official, but “it can’t be one that is anti-Brexit.”