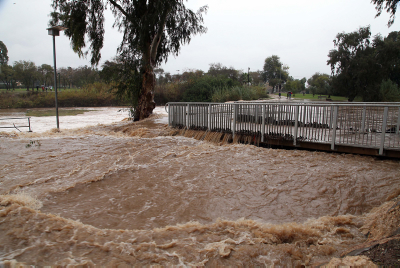 After a month of healthy rainfall, Israel’s streams and rivers are flowing stronger than in many years — and they are flowing more cleanly, as well. A report by the Environment Ministry released this week said that pollution in the country’s waterways had fallen between 60 percent and 90 percent in the past two decades, the result of advanced environmental control and cleanup techniques.

The study covered the current situation in 17 chief waterways in all parts of the country, comparing their pollution levels at the end of 2015 with that of their levels in 1994. Among the waterways included in the study were the Yarkon River, as well as principal streams including Harod, Naaman, Besor, Poleg, Hadera, Alexander, Ayalon, Lachish, Kishon and others. The study measured levels of organic and chemical waste in the waterways.

Some 6,000 tons of phosphorous were present in the waterways in 1994, but by the end of 2015 that chemical’s presence had fallen dramatically, to 329 tons altogether. Nitrogen levels fell 64 percent, the result of advanced water recycling techniques. Many of the sources of pollution had been shut down as well; in 1994, 250 such sources were found, compared to only 69 in 2015.

The most polluted stream right now is the Soreq, followed by the Besor and South Jordan Stream. The former two are expected to show dramatic improvement in the coming years, officials said, as improvements that have been recently made there kick in. The biggest source of pollution for many streams in the center of the country, such as the Alexander, are from the Palestinian Authority.

Despite all this, the streams have a way to go before Israelis can drink them in their “natural” state, the report added, as they are still considered inferior to the treated water that flows from faucets.