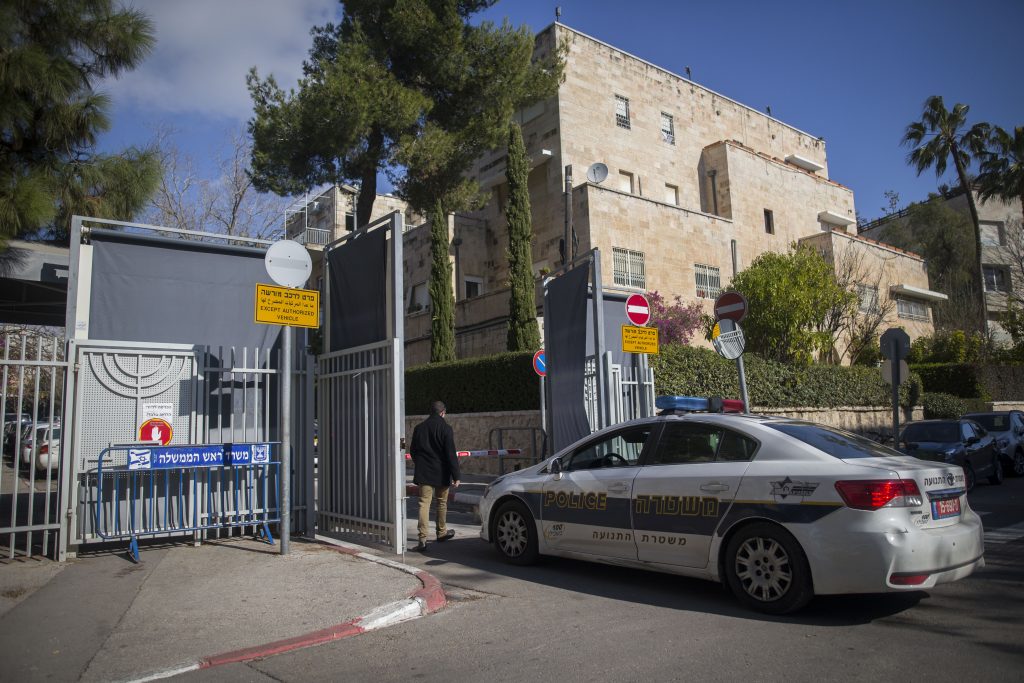 Police questioned Prime Minister Binyamin Netanyahu for three hours under caution Monday night, at his official residence in Yerushalayim on suspicion of receiving gifts from businessmen in breach of his role as a public servant.

Part of a police statement issued after the questioning ended said that “investigators questioned PM Binyamin Netanyahu under caution on suspicion of receiving benefits.” No additional details were initially given.

In questioning a suspect under caution, police investigators believe that the person they are interviewing has a case to answer.

The move to question the prime minister was authorized by Attorney General Avichai Mandelblit, who decided after a preliminary inquiry that there was enough evidence to open a criminal investigation. Mandelblit issued a long statement which did not detail the matters being investigated but said the information warranted questioning under caution.

It also mentioned other suspicions which had been checked but did not yield evidence to warrant additional criminal inquiries.

“The nature of the investigation precludes us at this stage from giving details of the ongoing investigation but we will consider releasing more information from time to time according to developments,” Mandelblit’s statement said.

He added that investigation began three months ago but new, detailed information had come to light during the past month which supported questioning the prime minister under caution.

Netanyahu’s police appointment drew a barrage of commentary from opposition MKs, with politicians calling for him to go. But Yair Lapid, leader of the Yesh Atid party, said that for the good of the country, he hoped the prime minister would be cleared.

“I wish for him and his family, and the State of Israel, that we uncover that there was no fault in his behavior. If two prime ministers in a row fall from office because of corruption, it will be very hard to rehabilitate the public’s trust in its leadership.”

Israeli commentators pointed out that while Netanyahu may be questioned, that has happened many times in the past and prime ministers have gone on governing, sometimes for years.