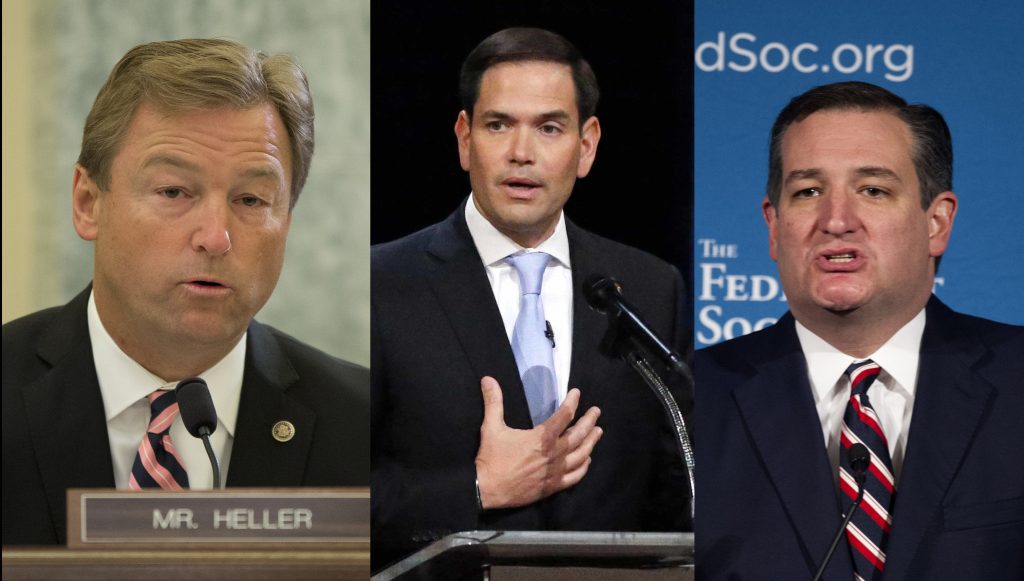 U.S. Senators Dean Heller (R-Nev.), Ted Cruz (R-Tex.) and Marco Rubio (R-Fla.) introduced legislation on Tuesday to force the U.S. to move its embassy in Israel from Tel Aviv to Yerushalayim, thereby recognizing Yerushalayim as the capital of Israel.

In 1995, Congress passed the Jerusalem Embassy and Relocation Act, which required the State Department to move the embassy to Yerushalayim or risk losing certain funds — unless the president signed a six-month waiver. Since then, every president has signed the waiver every six months, and the embassy has remained in Tel Aviv.

The bill introduced by the three Republican senators on Tuesday, called the Jerusalem Embassy and Recognition Act, would no longer allow the presidential waiver.

“For years, I’ve advocated for America’s need to reaffirm its support for one of our nation’s strongest allies by recognizing Jerusalem as the undivided capital of Israel,” said Heller, in a press release by the senators announcing the legislation. “It honors an important promise America made more than two decades ago but has yet to fulfill. While Administrations come and go, the lasting strength of our partnership with one of our strongest allies in the Middle East continues to endure. My legislation is a testament to that.”

“Jerusalem is the eternal capital of the Jewish state of Israel, and that’s where America’s embassy belongs,” said Rubio. “It’s time for Congress and the president-elect to eliminate the loophole that has allowed presidents in both parties to ignore U.S. law and delay our embassy’s rightful relocation to Jerusalem for over two decades.”

“Jerusalem is the eternal and undivided capital of Israel,” said Cruz. “Unfortunately, the Obama administration’s vendetta against the Jewish state has been so vicious that to even utter this simple truth — let alone the reality that Jerusalem is the appropriate venue for the American embassy in Israel — is shocking in some circles. But it is finally time to cut through the double-speak and broken promises and do what Congress said we should do in 1995: formally move our embassy to the capital of our great ally Israel.”

President-elect Trump has pledged to move the embassy to Yerushalayim.