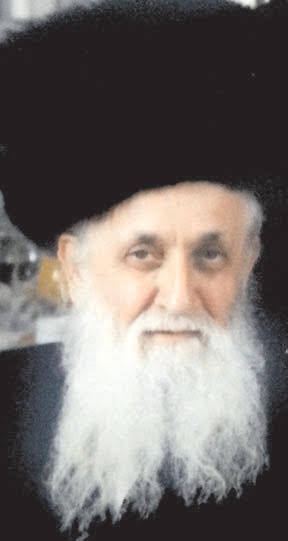 Rabbi Nachman Elbaum, z”l, an elder chassid who was one of the Yaldei Tehran and battled to preserve his Yiddishkeit, passed away in Yerushalayim early Monday at the age of 93.

Reb Nachman was born in Warsaw, Poland, to Reb Yitzchak Eizik Halevi Elbaum, a Breslover chassid who became a Gerrer chassid after the war. The Imrei Emes was his sandak, as he was in Warsaw at the time of the bris.

Reb Nachman was blessed with a fiery love of Torah. Before his bar mitzvah he traveled to learn in Baranowitz, under Harav Elchanan Wasserman, Hy”d. He was tested on 500 dapim of Gemara to enter Yeshivas Chachmei Lublin. However, he was too young, and by the time he became of age, the war had already broken out. He was home in Warsaw for Yom Tov when the war broke out.

Upon seeing the way the Nazis treated the Jews in Warsaw, Reb Nachman’s father and uncle, Reb Moshe Elbaum, realized that they had to flee quickly. They thought only the men were in danger, decided that the two brothers would travel toward Russia. Reb Nachman, his mother and sister escorted the men to the train station. His father turned to him and said, “Go home with Mother.” An old man suddenly interjected, “Today, you don’t have to say anything. If the boy wants to go with his father, he should…” Nachman had no ticket but he joined the people on the train. It was bashert that he had a passport because he had traveled to Baranowitz.

When they arrived in Tashkent, Nachman saw an old man who was so starved he was on the verge of death. Nachman went to the bread distribution lines and grabbed some bread and ran away. He did this a second and third time, until he was caught and jailed.

A Lubavitcher baal chessed, Reb Zalman Sudkevitz, z”l, worked to free him. When he was released, Reb Zalman learned that the boy had been grabbing bread to save the dying old man.

As was his lifelong custom, Reb Nachman never told anyone, even his children, about his acts of chessed. But this one emerged unintentionally: Reb Zalman was invited to all of Reb Nachman’s simchos. At the bar mitzvah of a grandson, Reb Nachman took the microphone and praised Reb Zalman as his “rebbi in chessed.” Reb Zalman, in return, took the microphone for himself and said, “He’s talking about chessed?” He then related this story that had happened in Russia.

In Tashkent, the Youth Aliyah arranged for a group of 719 children who had escaped from Poland to make aliyah, under the aegis of the Anders Polish government in exile via Tehran. The counselors on this group were from Hashomer Hatzair, and their goal was to secularize the children. This shameful affair became known as the story of Yaldei Teheran.

The organizers asked Nachman if he had parents. He didn’t want to lie and said his mother had remained in Warsaw; he didn’t mention his father.

Before the trip, he gave his father all his clothes and belongings so he could sell them for food.

The counselors cut the peyos of the refugee children, but Nachman guarded his peyos valiantly, even sleeping with his hands on his face, lest they try to cut them off while he slept. He was the only one of the Yaldei Tehran who kept his peyos.

At the camp in Tehran, the children saw religious families eating nonkosher food. When the claim of pikuach nefesh was offered, Nachman pointed out that when there is alternate food, such as potatoes, it is not pikuach nefesh.

The organizers feared his influence on the youngsters. They promised to give him everything he wanted as long as he did not interfere in the way of life in the camp. Of course, he did not capitulate.

While on the ship to Eretz Yisrael, the counselors demanded that the children sing the anthem without a yarmulke, as was done in Poland. Nachman stood and claimed that the honor of Am Yisrael was the yarmulke. The counselors announced that anyone who wanted to sing with a yarmulke should leave during the song. Nachman was the first to leave, and 100 children followed him.

When they were taken to the Kosel, the counselors explained that it was an ancient wall from a historic structure. Nachman announced loudly that this was the Western Wall of the Beis Hamikdash and that the Shechinah never left this place.

Upon arrival in Eretz Yisrael, young Nachman raised a hue and cry wherever he went about the spiritual plight of Yaldei Tehran.

Reb Nachman began to learn in Yeshivas Sfas Emes of Ger in Yerushalayim and later was one of the first ten talmidim of Yeshivas Ponovez.

At the time, the Beis Yisrael sent young Nachman to the Agudas Yisrael camp in Kfar Sava, to bring to him the two sons of the Rav of Pietrkov, who turned out to be Rav Yisrael Meir Lau and Reb Naftali Lavi. This was just one of the many missions Reb Nachman carried out over the years for the Gerrer Rebbes, most of which remained secret, because Reb Nachman never spoke about his activities.

He was a devoted Gerrer chassid, serving as the driver of the Beis Yisrael, a task his two sons took over. In America, he was one of the pillars of the Gerrer community, and helped establish and support the mosdos.

Reb Nachman married, tbl”c, Chana, the daughter of Harav Zev Dov (Berel) Ludmir, a Boyaner chassid who was a renowned baal chessed. Before the marriage, Reb Nachman stipulated that they have an open home, which was self-understood for his future wife as she had grown up in just such a home.

Indeed, they opened their doors to many refugees, and many later related that their first kapotes for Shabbos were purchased by Reb Nachamn. He lived alternately in New York and Yerushalayim, and hosted Gedolei Yisrael in both homes.

Reb Nachamn opened the Ideal Tours travel agency, which, in addition to being a business, also was a conduit for chessed.

He was a legendary baal chessed and baal tzedakah. There was a constant stream of people in need of assistance – whether money, shalom bayis or other issues – at his door, and he generously gave of his time and money to all those in need.

Reb Nachman would send tallisos, tefillin and siddurim into Communist Russia. When the Iron Curtain began to fall, he was the first to bring American Jews to daven at the holy tziyunim in the Ukraine. He also was among the first to renew travel to Uman, especially for Rosh Hashanah.

He was also very active in finding kevarim of tzaddikim in the Ukraine and Poland, and restoring them, notably the kevarim of Reb Levi Yitzchak of Berditchev, the Rebbe Reb Bunim of Peshischa, the Kotzker Rebbe, the Rebbes of Radzymin, Harav Nechemiah Alter, Harav Yaakov Dovid of Amshinov, and many others.

He moved last year to Israel. Despite his weakening health in recent years, he could regularly be seen in the Gerrer beis medrash in Yerushalayim, greeting people and learning with chavrusos, including his grandchildren and great-grandchildren.

The levayah departed Monday morning from Shamgar and passed the Gerrer beis medrash on Yirmiyahu Street. The Gerrer Rebbe, shlita, accompanied the aron on foot for some distance. It then continued to the beis medrash on Ralbach Street.

Reb Nachman had instructed that no hespedim be delivered and that the words “meichashuvei chassidei Ger” not be written. But many spoke in his praise, sharing stories from all his stops in life.

Reb Nachman is survived by his wife, Chana; his sons, Reb Nachum and Reb Aryeh of Yerushalayim, and his daughters, Mrs. Asi Gepner of Yerushalayim and Mrs. Devorah Benedict of the West Side.

He merited to see five generations of offspring following in his ways.