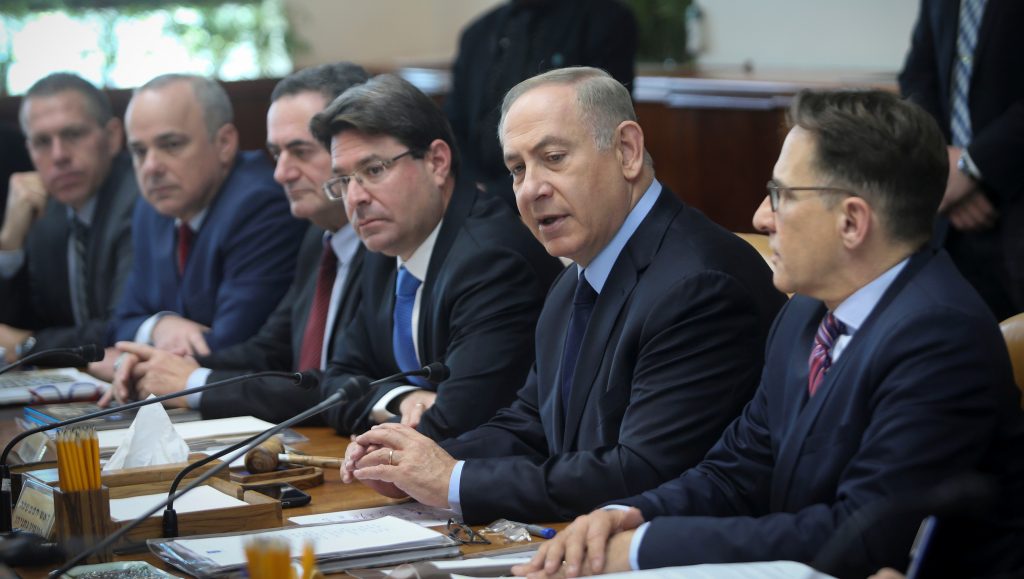 The Israeli government announced a new, tougher policy on the highly charged issue of negotiating with terrorists for the release of captives or the bodies of fallen soldiers.

The cabinet decided unanimously on Sunday that Israel will not return the bodies of Hamas-linked Palestinians killed during terrorist attacks to their families. Instead, their bodies will be buried in a cemetery established for the enemy dead.

The decision marks a new phase in Israel’s ongoing efforts to secure the release from Hamas of the bodies of IDF soldiers Staff Sgt. Oron Shaul Hy”d and Lt. Hadar Goldin Hy”d, and Avraham Mengistu and Juma Ibrahim Abu Anima, two Israelis who crossed into Gaza on their own.

It was the first time that the cabinet has ever convened solely to determine policy for return of captives and fallen soldiers. The meeting was held in response to pressure from the soldiers’ families and the general public on the government to formulate an effective policy.

The Prime Minister’s Office said in a statement that the cabinet focused on ways to obtain the return of Israeli civilians held in Gaza and bodies of soldiers killed there. The statement said ministers adopted a “plan of action,” but gave no details.

However, it was disclosed that Interior Minister Rabbi Aryeh Deri and Finance Minister Moshe Kahlon headed a subcommittee to prepare the groundwork for the cabinet decisions, which involved consultations with the families, senior IDF and Defense Ministry officials.

At the conclusion of the cabinet meeting, various issues were raised including re-arrest of prisoners who had been released in the Shalit swap and treatment of Hamas prisoners in Israel. The general aim was to bring constant pressure to bear on Hamas to change its attitude and to release the captives and bodies in their hands.

“We won’t give a medal to those who decide to do too little too late. At face value, the action plan that the cabinet unanimously decided on deals with important matters that can lever pressure on Hamas. But the responsibility is on the prime minister to put the decision into action,” the Goldins said in a statement. “In addition, we expect that there will be a clear mechanism of stronger and more stringent steps against Hamas in all the actions which the government should now act on.”

The Shaul family: “We have already given up on the things the Israeli government says on the matter, and we are waiting for operative actions,” they said, according to a media report. “From our point of view, nothing has changed and we are waiting for the prime minister to take a leadership decision and bring Oron Shaul home from war.”