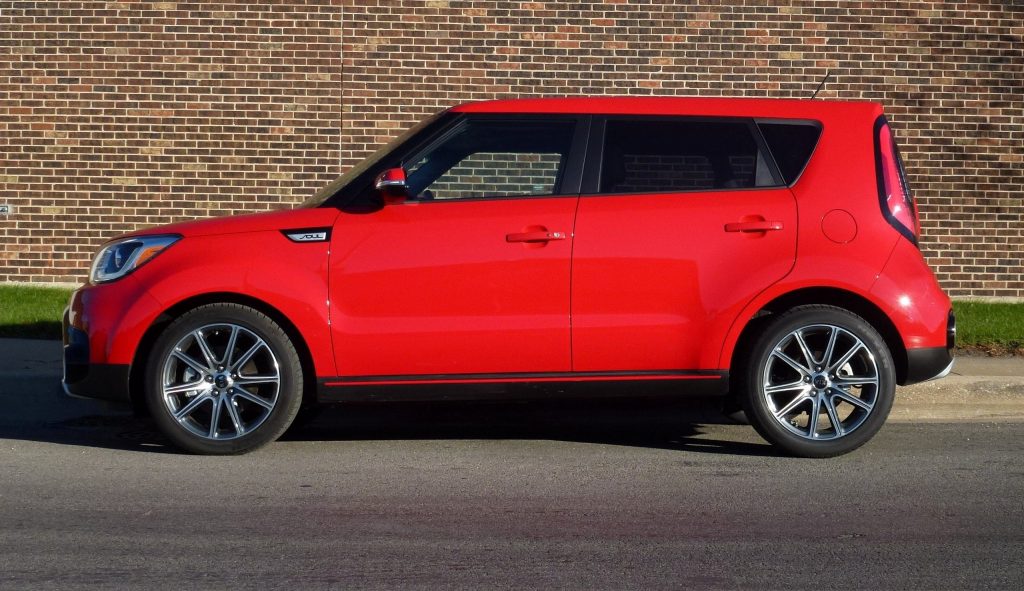 The 2017 Kia Soul Turbo Exclaim adds another variation to the tall hatch’s lineup, featuring a new 1.6-liter turbocharged engine and seven-speed dual clutch transmission. For the car spotter’s guide it can be distinguished by 18-inch alloy wheels, some red trim, and chrome dual exhaust tips.

The Soul Exclaim tester wore its sporty touches well. A snappy “Inferno Red” paint job helped. It is actually a fine metallic, only discernible when the sun hits it straight on.

As its boxy shape implies, the Soul is roomy inside for its small footprint. The optional panoramic sunroof does cut into interior volume a bit, but you won’t miss it. You will miss mounting points for a roof rack, however, and $1,000 from your bank account. Leg room for the front occupants is generous, though at the expense of rear passengers if you roll too far back. In that position, there is enough room to fold down the split rear seat backs for hauling larger items. There’s 18.8 cubic feet in the very back with the seats up, with a removable hard cover to keep your cargo concealed. We transported five adults for a short dinner outing, but there were some acrobatics required to find the seat belts.

Niceties on the tester such as heated rear seats are courtesy of this highest trim level, while an extra $3,000 for the optional technology package will offer some things useful and some silly. Blind spot rear detection is useful, but the illuminated rings on the speakers that you can set for “mood” lighting or to pulse with the music can be silly fun.

The instrument panel is really well-executed. The displays have nice graphics and a soothing font. Plus it all matches, unlike some of the competitors. Hard buttons and one knob for the HVAC are intuitive. You don’t have to go deep into the screens for any commonly used functions.

Under the hood a 1.6-liter four-cylinder produces 201 horsepower, a jump of at least 40 from other Soul engines. It’s also the only Soul to get the new seven-speed dual-clutch transmission. This type of transmission can shift more quickly, thereby saving gas by reducing wasted motion of the engine. The dual-clutch does not have the always-engaged sensation of an automatic, though, so there can be a delay when leaving a stop or a slight rollback on incline in the Soul. This powertrain is state-of-the-art stuff, but some American consumers have had issues with it feeling like a cross between a manual and automatic transmission.

The turbocharger needs the engine to build up some speed before it can do its job of forcing more air in, so add in a helping of turbo lag, and this Soul can feel indecisive when accelerating.

Sport mode helps by getting the shift points more in line to where the turbo spools up, making it a bit more decisive. It also seems to keep the traction control from cutting power as readily when the tires slip.

Not singling out Kia here, but the dirty little secret of our post-turbo/small displacement world is that once you get into the turbo, your mileage plummets. Granted, the point is to have a small engine that sips fuel, or at least games the EPA test, yet have the turbo there for some extra oomph when you want it. With the Soul you are going to have to drive like you are trying not to squish a marshmallow between your foot and the accelerator to get close to EPA figures. We averaged 20.1 mpg mostly city in our week in the Soul.

It was surprising Kia got into the gasoline direct injection game early on, considering its status as a value brand. It’s a technology that promises better mileage via more precise fuel delivery, but it is expensive. Maybe less so now with major players like Kia buying more of it.

Kia’s powertrain technology has been impressive. The ride and handling of its vehicles not so much. However, the 2017 Soul changes that perception. It feels solid over bumps. The suspension could be a tad more compliant, but if the compromise is not leaning while cornering, we’ll take it.

Overall, the turbo engine adds a fun-to-drive element in Sport mode compared with the mundane powertrains already available. Paired with the dual-clutch transmission, the Soul is as quirky and fun behind the wheel as it is on the road.