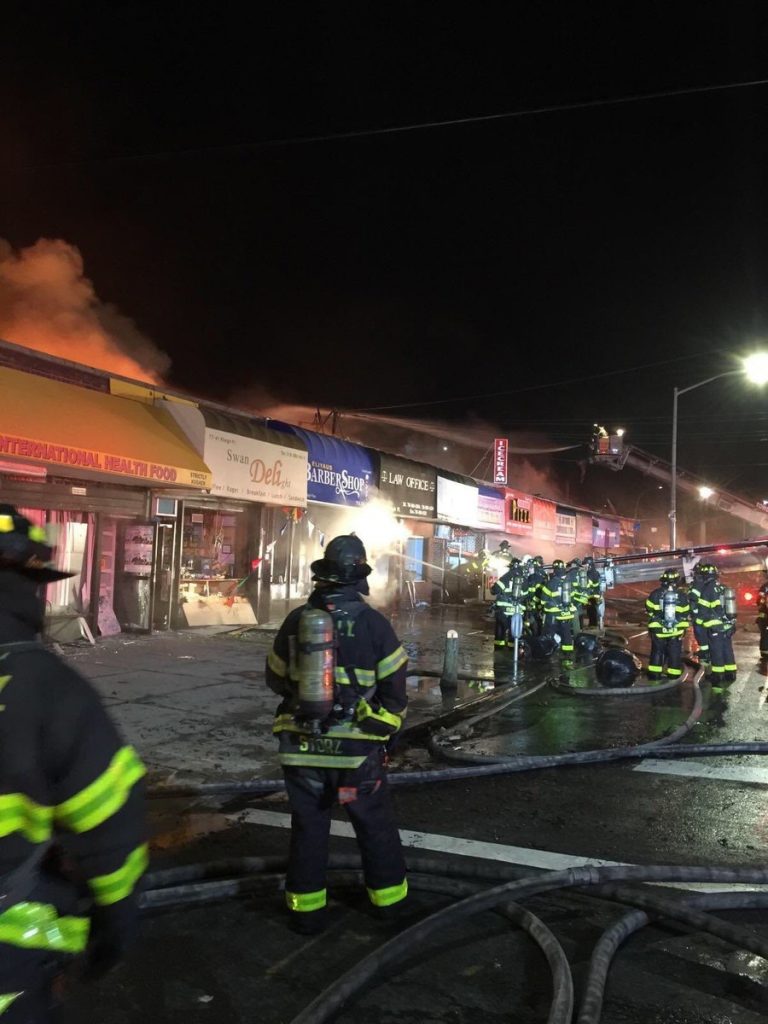 A five-alarm fire that took hours to extinguish destroyed 14 shops in the Kew Gardens Hills section of Queens. Most of the businesses belonged to members of the area’s large Orthodox Jewish community and were closed as the blaze broke out on Friday night, shortly after the start of Shabbos.

Three firefighters suffered minor injuries, but no others were hurt.

One of the stores caught in the blaze was Moshe’s Pizza. It’s proprietor, Moshe Benjamin, first heard about the incident on Motzoei Shabbos, and came to see what remained of his store.

“Everything was burnt. It looked like a war zone, a piece of charcoal,” he told Hamodia.

The blaze broke out on Friday night at about 6:00 p.m. beginning in a shop in the middle of the retail strip between 77th Road and 78th Ave on Vleigh Place. Within an hour, all 14 shops, which are connected by a single roof, were deeply engulfed in flames. Firemen battled the fire for nearly six hours before they could finally extinguish it. The stores were left mostly gutted, roofless, and with major water damage. The fire’s cause remains under investigation.

“It is very tragic,” one member of the community told Hamodia. “Many of the businesses are owned and operated by immigrant, Shomer Shabbos families. It is a very big loss, and I do not know what these families are going to do now for parnassah.”

Other stores destroyed include Avraham’s Bakery, Haim’s International, a barber shop, a dry cleaners, and a law office. Many of the owners are members of Queen’s large community of Bukharian Jews. Mr. Benjamin was born and raised in Eretz Yisrael to parents who had emigrated from Iran.

Despite the dismal scene, he was hopeful that his and other businesses would rise again.

“The structures are all still there. They need to clean it out, but in my opinion they will rebuild in four or five months,” said Mr. Benjamin. “I set up a phone line that we are closed for now but we hope to be open again very soon.”

He said that a meeting is planned for this coming Tuesday to decide on future plans for the site. The city declared all 14 stores condemned on Shabbos afternoon.