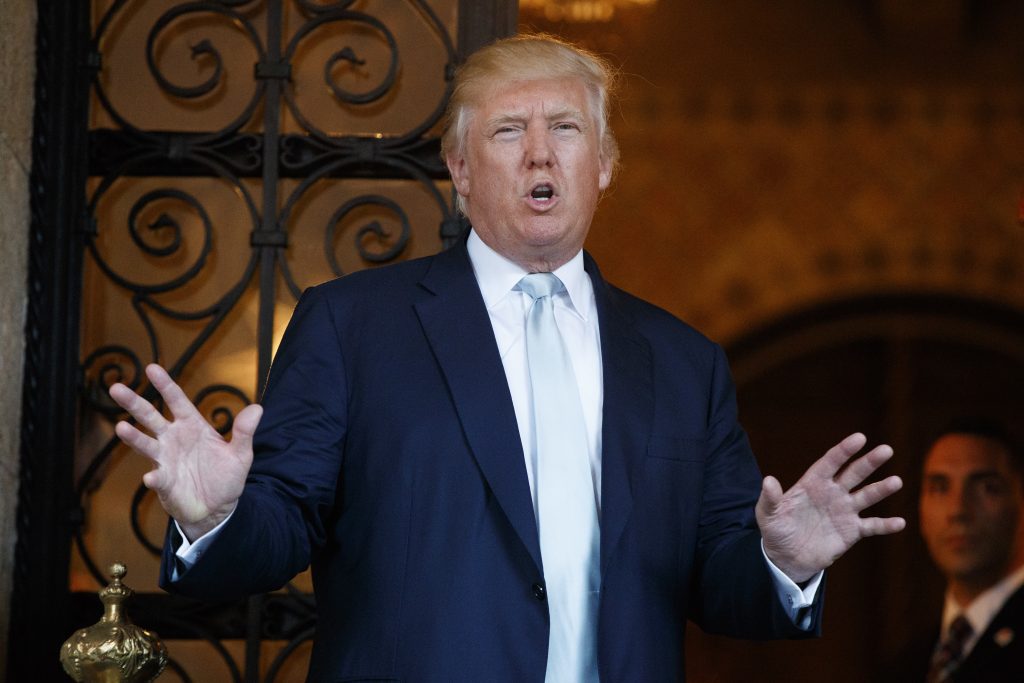 President-elect Donald Trump applauded the return of 8,000 jobs to the U.S. and hailed his transition discussions with President Barack Obama in a series of comments that amounted to his most detailed interaction with journalists since before the election.

In one of his cameos Wednesday on the front steps of his Mar-a-Lago resort in Palm Beach, Florida, Trump praised plans by a Japanese mogul to bring jobs to the United States. They could be the first of the 50,000 jobs that tech billionaire Masayoshi Son promised to create after meeting with the president-elect earlier in December.

Son is the founder and chief executive of SoftBank, one of Japan’s largest technology outfits. He owns the U.S. mobile carrier Sprint, which Trump said on Wednesday would be moving 5,000 jobs “back” to the United States. Son also controls OneWeb, which Trump said would hire 3,000 workers.

It was unclear whether the president-elect was referencing the Dec. 6 commitment by Son to invest $50 billion in the United States and create 50,000 jobs.

Trump said the addition of 8,000 jobs was “because of what’s happening and the spirit and the hope.”

Still, the U.S. job market has been robust for much of 2016. Employers have added more than 2.2 million jobs over the past 12 months — a sign of economic health that predates Trump’s presidential victory.

Sprint has struggled since its 2013 acquisition by SoftBank. The carrier shed roughly 9,000 workers between 2012 and 2016, reducing its staff to 30,000, according to annual reports.

Sprint Chief Executive Marcelo Claure said in a statement that the company is “excited” to work with Trump.

“We believe it is critical for business and government to partner together to create more job opportunities in the U.S. and ensure prosperity for all Americans,” Claure said.

The Sprint jobs announcement came on Wednesday after tensions rose and fell between Trump and Obama. Trump has made it clear that it didn’t sit well with him when Obama recently boasted that he would have won the election if he’d been running.

Trump appeared again later Wednesday night on the Mar-a-Lago steps and dismissed days of tense remarks by the outgoing and incoming presidents about who would win if they were to hypothetically run against each other, saying he and Obama had “a very, very good talk.”

Earlier, he had accused Obama of throwing up “inflammatory” roadblocks during the transition of power and said his administration was treating Israel with “total disdain.”

White House spokesman Eric Schultz said Obama phoned Trump. “Today’s call, like the others since the election, was positive and focused on continuing a smooth and effective transition,” Schultz said. “The president and president-elect committed to staying in touch over the next several weeks.”

He told reporters that Israel is being treated “very, very unfairly,” maintaining that countries that are “horrible places” never get reprimanded. He refused to directly answer a question about whether Israel should stop building settlements, saying he is “very, very strong on Israel.”