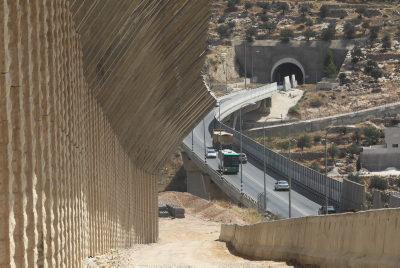 When they were first built some 20 years ago, the tunnels on Route 60 between Yerushalayim and Gush Etzion were seen as a solution to the endemic traffic problems along the route, as well as an increase in security and a lessening of community travel time. For a while, the tunnels did indeed have these effects — but rising populations and the increase in the number of vehicles plying the highway have returned the situation to its previous traffic-choked levels.

The response of planners is… build another tunnel. Alongside the two tunnels on the road, one 900 meters long and one 300 meters long, will be another two tunnels, part of a plan to double the roadway, with two lanes in each direction instead of one.

Local authority heads and the directors of the Gush Etzion Regional Council lobbied long and hard for the project, and were ecstatic over its approval. Moshe Seville, acting head of the Council, said that this was “an important development for Gush Etzion residents. Doubling the roadway will save time and reduce traffic between Gush Etzion and Yerushalayim. It took a long time for the road to be approved. This is the time to thank Prime Minister Binyamin Netanyahu and Transport Minister Yisrael Katz for their efforts.”