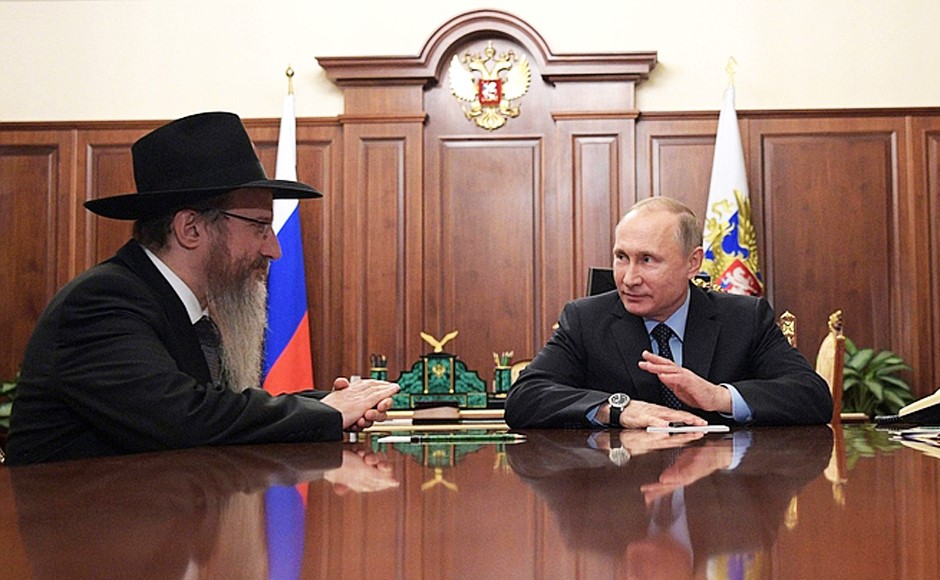 “I would like to extend my holiday greetings to you and to all of Russian Jewry. I wish you a happy Chanukah and all of the very best, along with your family and all of the Jews in Russia. I must say that there are very positive developments in Russia. New Synagogues and Jewish Centers are opening up, and I am thankful to you for that. I hope that our joint efforts will continue to thrive and progress.”

These were the wishes of Russian President Vladimir Putin to Chief Rabbi of Russia Berl Lazar at a private audience that was granted in honor of Chanukah at the Kremlin office in Moscow.

Later, the president told Rabbi Lazar: “There have been many nations who have come and gone. But the Jewish nation continues to exist, generation after generation for thousands of years. I am sure that this is only because of their strict adherence to the Torah and its commandments. They pass on these traditions throughout the generations no matter what the circumstances.”

“Once again, I’d like to thank you for the development of Jewish communities, and lots of Jewish activities for all ages and in all areas, here in our country of Russia,” continued the president.

The meeting, which was held in honor of Chanukah, was also attended by the president of the Federation of Jewish Communities in Russia, Rabbi Alexander Boroda.

The first part of the meeting was open to the Russian media, which covered and reported it in a most sympathetic and dignified manner. During the meeting, a few more topics came up regarding continuing the development of Jewish institutions all over Russia, including the return of many historical buildings which had been synagogues and Jewish schools in the past. The president was highly supportive of all these initiatives and requests.

As the meeting finally ended, the words we say when lighting the Chanukah candles, “in those days, in these times” seemed to echo even louder.