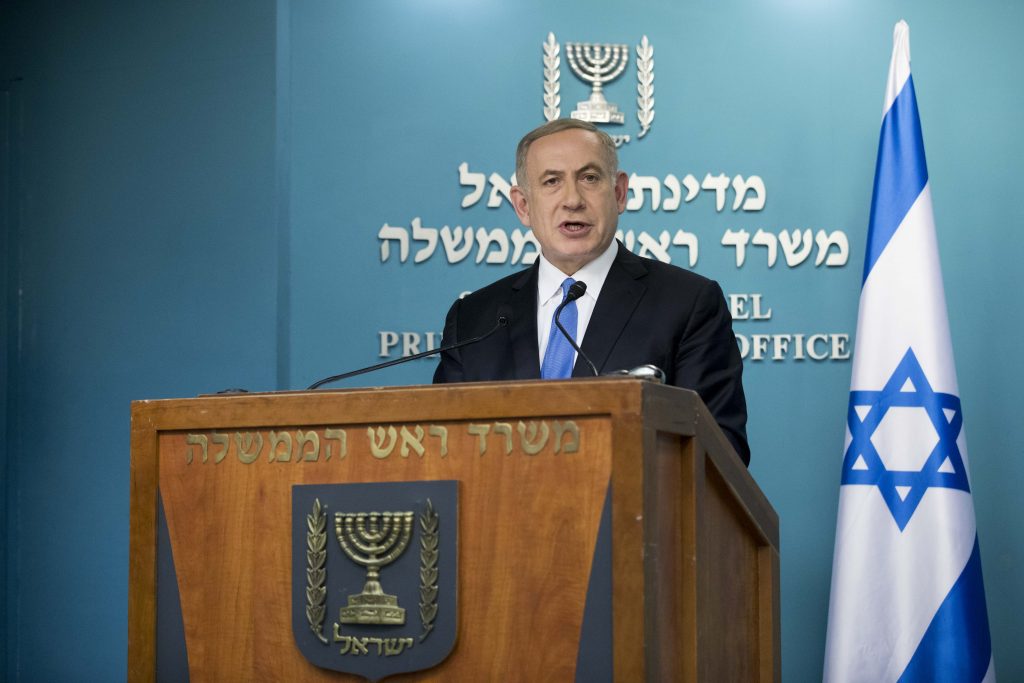 Prime Minister Binyamin Netanyahu led the Israeli response to U.S. Secretary of State John Kerry’s valedictory on Mideast peacemaking, comparing it in bias to the anti-Israeli resolutions of the U.N.

“For more than an hour, Kerry obsessed over the issue of settlements and hardly touched on the root of the conflict – Palestinian resistance to a Jewish state within any borders,” said Netanyahu, in a statement delivered from his office. “Just like the resolution that John Kerry advanced at the United Nations, the speech he delivered was biased against Israel.”
Kerry claimed that Netanyahu’s right-wing government was to blame for the failure to realize a two-state solution to the conflict with the Palestinians, and that it is on the road to a disastrous, “permanent one-state reality.”

Education Minister Naftali Bennett, leader of the Jewish Home party, an outspoken proponent of annexation of parts of Yehudah and Shomron, challenged the very premise of Kerry’s speech.

Bennett said that Kerry “quoted me three times anonymously in order to show that we object to a Palestinian state.”

“So here it is out in the open: True, as far as it depends on me, we will not establish another terrorist state in the heart of [Israel]. Israeli citizens have paid with thousands of victims, tens of thousands of missiles and endless condemnations because of the messianic policy of a Palestinian state. The time has come for a new path, and we will lead it,” Bennett said.

Israel’s ambassador to the U.N. Danny Danon rejected Kerry’s claim that the administration of outgoing President Barack Obama always had Israel’s best interests at heart, including the recent abstention.

“Coordinating anti-Israeli moves with the Palestinians and making a unilateral decision in the Security Council is not supporting Israel, it’s the exact opposite,”said Danon. “The Obama administration has acted against the State of Israel at the U.N., and any statement saying otherwise is a distortion of reality.”

Speaking for the center-left opposition, which has sided with the Obama administration in the furor over the abstention in last Friday’s Security Council vote condemning Israel policies over the 1967 lines, Zionist Camp leader Isaac Herzog said:

“John Kerry has always been a great friend of Israel and will always be. His speech expresses true concerns about Israel’s well-being and future.”