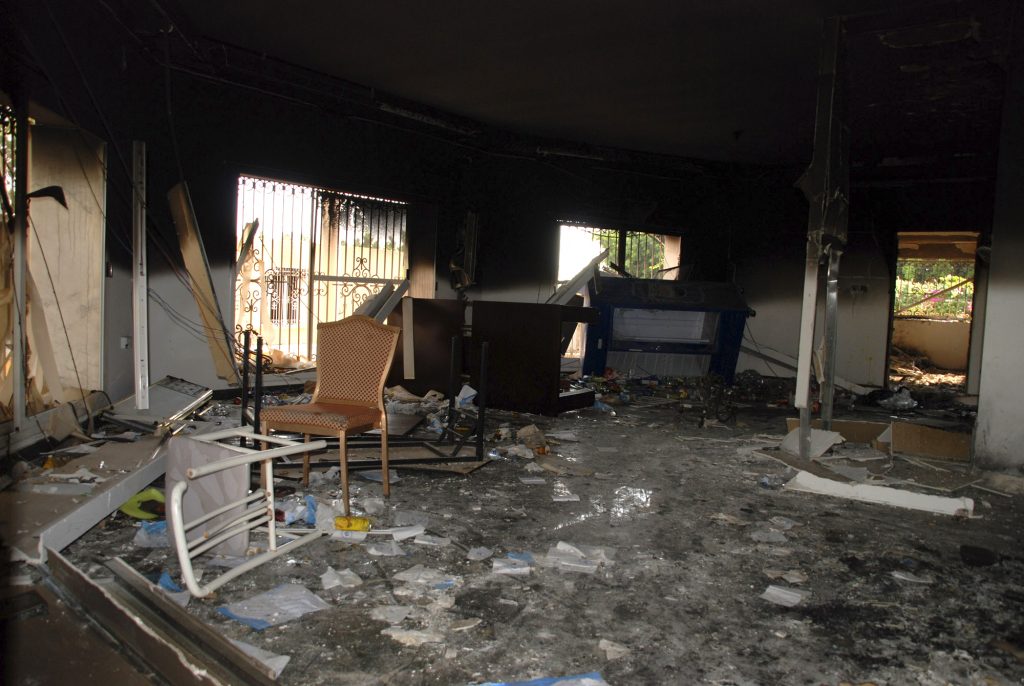 Donald Trump hammered rival Hillary Clinton during the presidential campaign for failing to prevent the attack on the U.S. mission in Benghazi, Libya, when she was secretary of state. Soon he’ll be the one responsible for protecting America’s diplomats, but he’s offered virtually no insight into how he’ll do that.

After the 2012 Benghazi attack, Congress boosted spending on security to protect the tens of thousands of Americans and foreign staff that make up the U.S. diplomatic service. Security experts and career diplomats say there have been improvements, but that significant shortfalls remain.

Last week’s assassination of Russia’s ambassador to Turkey, Andrei Karlov, was a chilling reminder that diplomats are increasingly exposed to threats, even in countries that are typically not regarded as hardship posts. The assassin shouted, “Don’t forget Aleppo,” apparently referring to Russia’s military engagement in Syria.

It’s not clear whether having a brashly outspoken figure like Trump in the White House will compound diplomatic security challenges. The foreign policy of Trump and his pick for secretary of state, Rex Tillerson, remains somewhat of an enigma.

The Trump transition team didn’t respond to questions about how his administration will address diplomatic security issues.

Keeping diplomats safe is a costly business. In the last budget year, Congress approved $3.39 billion for the Diplomatic Security Bureau’s functions around the world. That accounts for about 7 percent of the State Department’s overall budget.

Diplomatic security has also become highly contentious since the killings of Ambassador Christopher Stevens and three other Americans at Benghazi.

The Republican-led House Select Committee on Benghazi concluded in June that there were lethal mistakes by the Obama administration, though it found no “smoking gun” pointing to wrongdoing by Clinton. The committee included Rep. Mike Pompeo, R-Kan., Trump’s pick to head the CIA.

Another member of the committee, Rep. Jim Jordan, R-Ohio, criticized the Obama administration for refusing to create the position of undersecretary for diplomatic security. He called it the most important change “to enhance diplomatic security.” He claimed committee Democrats “stonewalled and played games while we searched for the truth.”

The top Democrat on the House Intelligence Committee, Rep. Adam Schiff of California, accused Republicans of losing interest in diplomatic security now that the election is over.

“Since the issue is no longer a useful cudgel against Secretary Clinton, I fear the [Republican] majority’s commitment to diplomatic security will once again fade, and the State Department could face cuts both to security budgets and to core diplomatic functions,” Schiff said.

A 2012 government inquiry following the Benghazi attacks made more than two dozen recommendations for security improvements, highlighting serious lapses in management and leadership that left the consulate vulnerable.

The Bureau of Diplomatic Security declined to answer specific questions on the areas where improvement is still needed, but said that diplomatic security “constantly balances available resources to provide a safe and secure environment for the conduct of U.S. diplomacy.”

Security experts and diplomats say more can be done within individual diplomatic missions to improve safety. Mission security chiefs can use more training, and ambassadors and other mission leaders should also be given greater authority over security matters since they are most familiar with conditions on the ground, experts say.

Fred Burton, a former diplomatic security agent, said mission security officials “never had that ability to speak for ourselves at these kinds of decision-making meetings because you’re pushed down on this flow chart and then you’re left … with all the challenges of being in a place like Benghazi.”

Burton, author of “Under Fire: The Untold Story of the Attack in Benghazi,” said he’s not optimistic the problem can be fixed unless Tillerson is confirmed “and his desire is to restructure the bureaucracy inside State.”

Traditionally, host countries have been obligated by treaty to protect diplomatic facilities. But with non-state actors gaining ground and capable of destabilizing governments, it’s falling to the U.S. to take all precautions to protect its diplomats while still giving them the freedom to do their jobs.

Robert Ford, a former ambassador to Syria, said the most helpful way Congress and the administration could advance diplomatic security is by providing “strong support for locally determined security resource needs.”

“Security issues cannot realistically be micro-managed from Washington-based officials because only the people on the ground have an up-to-date sense of conditions and the evolution of threats,” he said.