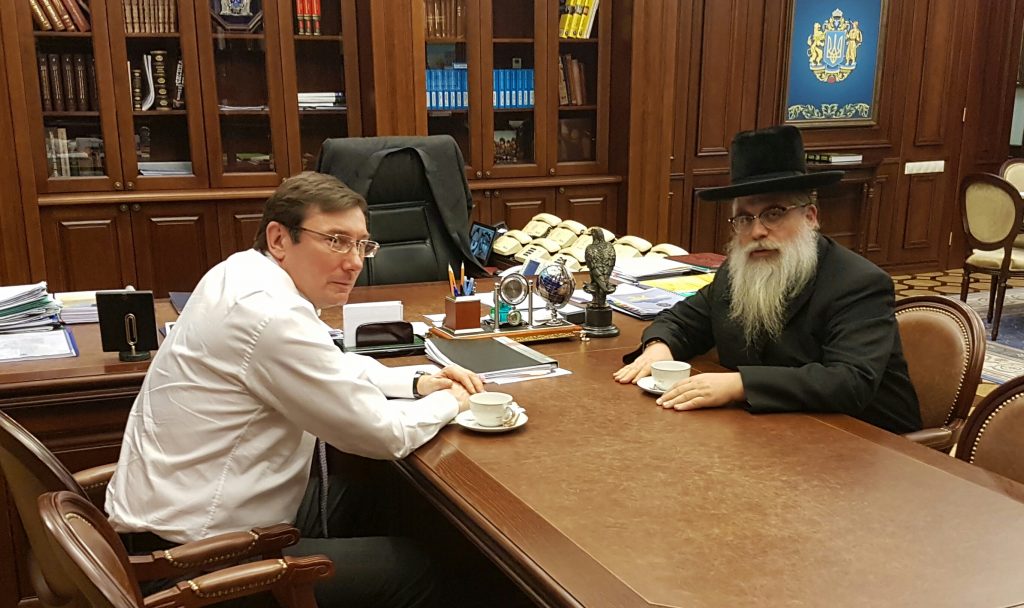 Ukraine’s top prosecutor said that he is confident that the perpetrators of last week’s attack on visitors at the kever of Harav Nachman of Breslov, zy”a, in Uman will be apprehended in the near future. Although no one was injured, the assault garnered wide attention from Jewish media as well as calls from several Israeli politicians for Ukraine to act swiftly.

Prosecutor General Yuri Lutsenko announced in the days following the incident that his office would make finding and punishing the culprits a high priority. Mr. Lutsenko said that he has canceled the planned vacation of the prosecutor of the local Cherkassy regions, pending progress in the case. He added a statement that “expressions of anti-Semitism and religious intolerance are unacceptable.”

In a meeting with Ukraine’s Chief Rabbi, Harav Yaakov Dov Bleich, Mr. Lutsenko revealed that authorities have identified the vehicle used by the perpetrators as one that was stolen from a neighboring town. Security footage did not capture the faces of the culprits, but did give police a clear sketch of their basic profiles. Private security employed by those responsible for the kever are working with the prosecutor’s office.

“They’ve gotten pretty far and seem to be taking the matter seriously, but we have to be vigilant and make sure that it remains a priority,” Rav Bleich told Hamodia following the meeting.

Last Wednesday evening, a small group of young men entered the ohel while shouting anti-Semitic slurs. Several Jews were inside at the time. The perpetrators sprayed the walls with red paint resembling blood and threw in a severed pig’s head. The culprits have yet to be identified, but are suspected to be associated with one of several ultra-nationalist groups in Ukraine, known for anti-Semitic rhetoric.

Many of Uman’s residents profit handsomely from the regular flow of Jewish visitors, especially Rosh Hashanah time, when thousands of Breslover Chassidim from around the world converge on the town. In recent years, Shabbos Chanukah has also become one of several annual occasions that draws nearly a thousand visitors to the kever. Rav Bleich said that those individuals responsible for this and other similar acts are more likely to have come from surrounding areas to target what they see as a “symbol of Jewish tourism” in Ukraine.

He added that while a great deal of effort is spent on trying to secure Uman, lack of organization among Jewish groups that visit and do business in the town poses a significant impediment. Additional “lawlessness” in the town, he concluded, is traceable to people who have encouraged attacks on Jews to promote extortion for protection fees