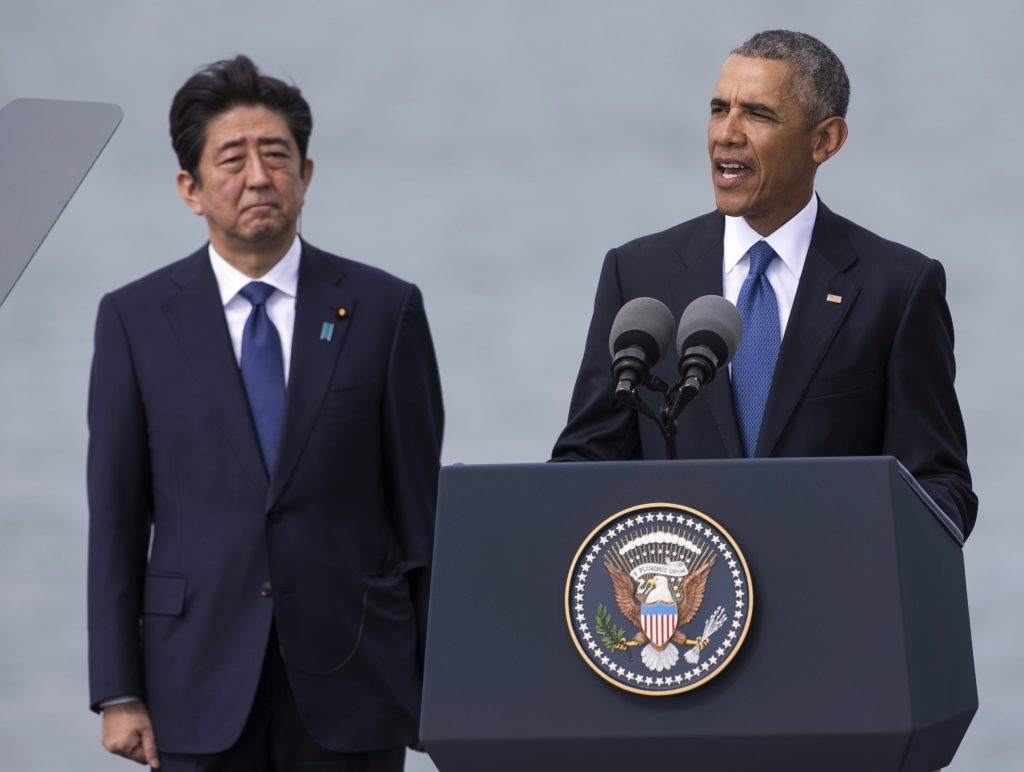 Under a warm Oahu sun, with the tranquil, teal waters of Pearl Harbor behind them, the leaders of two nations that were once bitter enemies came together to acknowledge the tremendous loss from the Japanese attack on U.S. military installations in Hawaii 75 years ago.

“As the prime minister of Japan, I offer my sincere and everlasting condolences to the souls of those who lost their lives here, as well as to the spirits of all the brave men and women whose lives were taken by a war that commenced in this very place,” Japanese Prime Minister Shinzo Abe said Tuesday.

Putting 75 years of resentment behind them, Abe and U.S. President Barack Obama made a historic pilgrimage to the site where the devastating surprise attack sent America marching into World War II.

After a formal meeting, they placed a pair of green-and-peach wreaths made of lilies aboard the USS Arizona Memorial and tossed purple flower petals into the water.

The rusting wreckage of the sunken ship where more than 1,000 American service members are entombed can be seen just under the water’s surface.

Obama and Abe closed their eyes and stood silently for a few moments before concluding their visit to the memorial and heading to nearby Joint Base Pearl Harbor-Hickam, where both leaders spoke.

The Japanese government has said that the visit is powerful proof that the former enemies have transcended the recriminatory impulses that weighed down relations after the war. Although Japanese leaders have visited Pearl Harbor before, Abe will be the first to visit the memorial constructed on the hallowed waters above the sunken USS Arizona.

For Obama, it’s likely the last time he will meet with a foreign leader as president, White House aides said. It’s a bookend of sorts for Obama, who nearly eight years ago invited Abe’s predecessor to be the first leader he hosted at the White House.

For Abe, it’s an act of symbolic reciprocity, coming six months after Obama became the first sitting U.S. president to visit Hiroshima in Japan, where the U.S. dropped an atomic bomb in hopes of ending the war it entered after Pearl Harbor.

“This visit, and the president’s visit to Hiroshima earlier this year, would not have been possible eight years ago,” said Daniel Kritenbrink, Obama’s top Asia adviser in the White House. “That we are here today is the result of years of efforts at all levels of our government and societies, which has allowed us to jointly and directly deal with even the most sensitive aspects of our shared history.”

In the ensuing years, the U.S. incarcerated roughly 120,000 Japanese-Americans in internment camps before dropping atomic bombs in 1945 that killed some 140,000 people in Hiroshima and 70,000 in Nagasaki.

Abe will not apologize for Pearl Harbor, his government has said. Nor did Obama apologize at Hiroshima in May, a visit that he and Abe used to emphasize their elusive aspirations for a nuclear-free future.

No apology needed, said 96-year-old Alfred Rodrigues, a U.S. Navy veteran who survived what President Franklin D. Roosevelt called a “date which will live in infamy.”

Abe’s visit is not without political risk given the Japanese people’s long, emotional reckoning with their nation’s aggression in the war. Though the history books have largely deemed Pearl Harbor a surprise attack, Japan’s government insisted as recently as this month that it had intended to give the U.S. prior notice that it was declaring war and failed only because of “bureaucratic bungling.”

“There’s this sense of guilt, if you like, among Japanese, this ‘Pearl Harbor syndrome,’ that we did something very unfair,” said Tamaki Tsukada, a minister in the Embassy of Japan in Washington. “I think the prime minister’s visit will in a sense absolve that kind of complex that Japanese people have.”

Since the war, the U.S. and Japan have built a powerful alliance that both sides say has grown during Obama’s tenure, including strengthened military ties. Both Obama and Abe were driving forces behind the Trans-Pacific Partnership, a sweeping free-trade deal now on hold due to staunch opposition by Congress and President-elect Donald Trump.

Moving beyond the painful legacy of the war has been easier for Japan and the U.S. than for Japan and its other former foes, such as South Korea and China. As Abe arrived in Hawaii, Beijing dismissed as “wishful thinking” the notion that Japan could “liquidate the history of World War II” by visiting Pearl Harbor.

“Japan can never turn this page over without reconciliation from China and other victimized countries in Asia,” said Hua Chunying, a Chinese foreign ministry spokeswoman.