Business FOCUS: Carrier’s Concern May Have Been Regulations, Not Wages
Business 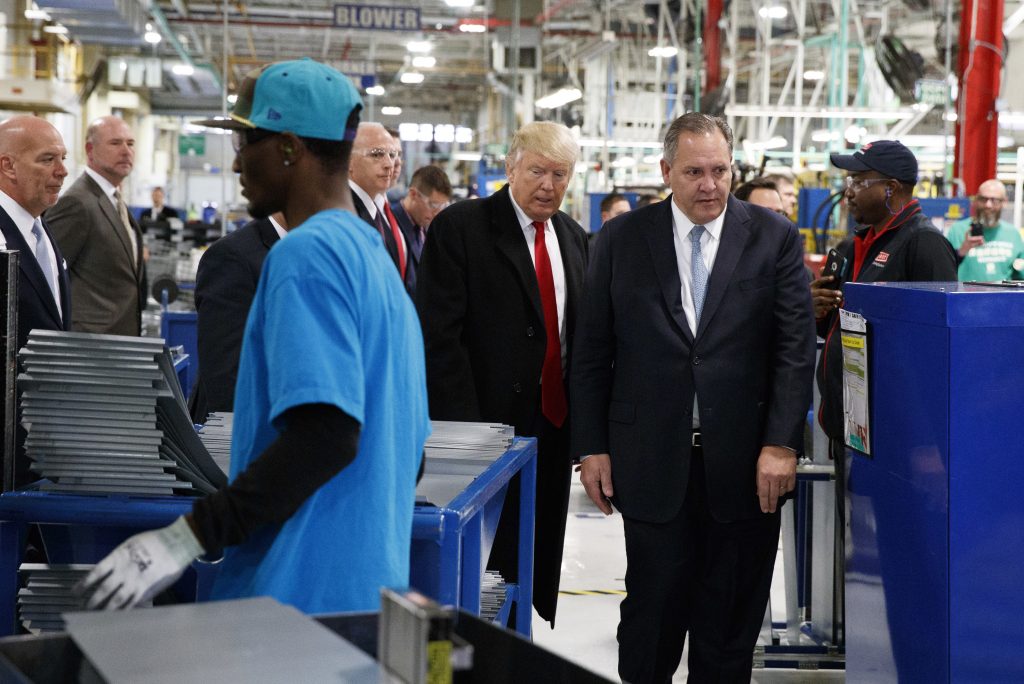 In March, a debate broke out about why Carrier, the air conditioning manufacturer, was planning to move 2,100 jobs from two Indiana factories to Mexico. “This is about Carrier chasing Mexican wages at $3 an hour,” Democratic Sen. Joseph Donnelly, Ind., charged at the time.

That prompted Jim Schellinger, president of the Indiana Economic Development Corporation, to write a letter to correct the record. While Carrier would indeed pay Mexican workers $3 an hour, plus another $3 in benefits, “extensive federal regulations were the leading factor of the decision to relocate 2,100 manufacturing jobs,” he wrote to Donnelly, according to a copy of the letter released as part of a public record request.

Carrier’s plans sparked national attention after President-elect Donald Trump, who had promised to prevent the offshoring, intervened, securing a deal to keep 800 jobs on American soil in exchange for roughly $7 million in state tax incentives.

That was a sliver of the $65 million the company projected it would annually save after shuttling jobs south of the border, triggering questions about why Carrier agreed to the deal.

The March letter, which was previously reported by Indianapolis TV news, may offer a clue. How Trump and Carrier reached an agreement remains murky. Speculation has focused on the company’s desire to please the new president and maintain United Technologies’ government contracts. But in a company statement, Carrier asserted the Trump administration will “create an improved, more competitive U.S. business climate.”

Trump, meanwhile, has promised to scale back regulation.

“Fifty-three new regulations,” Trump said in a Dec. 1 speech at Carrier’s Indianapolis plant, repeating a figure that Robert McDonough, the chief executive of Carrier parent United Technologies, had used to explain the regulations his company faced. “Massively expensive and probably none of them amount to anything in terms of safety. . . Your unnecessary regulations are going to be gone.” (United Technologies declined requests for comment.)

Neither Trump nor McDonough identified which regulations they think are stymieing enterprise, but Carrier sent a list of Department of Energy efficiency rules to Schellinger, records show.

The Energy Department standards, to be clear, apply to home and commercial appliances sold in the United States. They wouldn’t fall away because a business leaves the country.

Francis Dietz, spokesman for the Air Conditioning, Heating and Refrigeration Institute, the trade group that represents Carrier, said the recent flurry of efficiency regulations under President Obama have jacked up overall costs for companies like Carrier. Seeking cheaper labor, he said, is one way to offset that.

“The point is: When you have a large number of regulations, that ends up costing you a lot of money, and you start looking for other ways to save money,” Dietz said. “This leads companies to move some of their operations to where the cost to produce them is less.”

He produced a list of 52 measures, introduced by the Department of Energy between 2009 and 2016, that seek to alter the way companies make their heating and cooling products – including air conditioners and furnaces.

Trump has vowed to kill the EPA’s Clean Power Plan and said he might back out of the Paris climate agreement, moves that dramatically downgrade climate change’s status as a national priority. He has not, however, blasted energy-efficiency rules, which save consumers money while also curbing carbon emissions.

Obama’s Energy Department has finalized more new standards for energy efficient appliances than any past administration, pushing improvements for 45 different products, such as refrigerators and light bulbs.

James Sweeney, director of Stanford University’s Precourt Institute for Energy Efficiency, said if Trump wanted to undo Obama’s rules, he couldn’t knock them out by himself or quickly. Removing them would require producing new proposals that would have to pass economic analyses and any lawsuits. (Regulations finalized after May, however, could be subject to a speedier congressional reversal, thanks to Republican dominance on Capitol Hill.)

“He’d have to go through the process in reverse,” Sweeney said.

Under Obama’s rules, Americans would save an estimated $540 billion in electric and other bill expenditures through 2030, said Andrew deLaski, executive director of the Appliance Standards Awareness Project. The updates are also expected to annually slash emissions during that period by 210 million tons.

Over the last three years, the DOE has released 28 rules that would impact companies in the heating and cooling space, including Carrier.

John Hurst, vice president of government affairs and communications at Lennox International, which makes products similar to Carrier’s and also operates factories in Mexico, said the energy efficiency rules eat up his company’s money and time.

Developing new products is expensive, he said. Creating energy-saving air conditioners, for example, is costlier, too – they take up more space and therefore require more copper and steel.

“That,” he said, “can reflect an impact on American jobs.”

Still, he said, Lennox does not advocate for a rollback of rules they’ve already negotiated with the Energy Department. Hurst said he has met with DOE officials at least 15 times over the past two years and a Carrier representative was present to provide input as well.

The company has already made the investments necessary for new products. The manufacturing changes are underway. Regardless of what Trump does, he said, Lennox expects a deceleration of new regulations.

“That’s a natural outcome,” he said, “because we’ve negotiated long-term efficiency regulations with other business leaders. That provides regulatory certainty for the next 12 to 15 years, in most cases.”