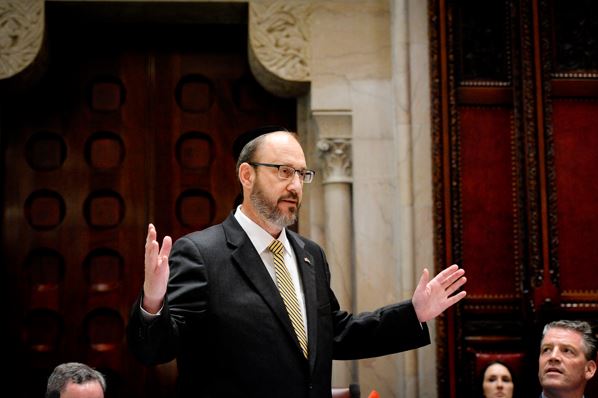 Simcha Felder did not endorse President-elect Donald Trump, he may not have voted for him, and he does not even belong to the same political party as Trump.

Yet, since Trump’s election last month, the state senator from Brooklyn has been besieged by hate mail, calls and now a protest at his office. The stated reason for the protests is his decision to continue caucusing with the Republican majority in the Senate. However, the sheer level of opposition, as well as its aggressiveness, is nothing like Felder’s ever seen before.

“Enough with the intimidation,” declared Felder, a senator since 2014.

Felder, a Democrat who won reelection last month on the Republican and Conservative party lines as well, has received hate mail and calls, with at least one overtly anti-Semitic and another accusing him of trying to kill people.

“In the last four years I used to get hassled, but it was never like this,” Felder told Hamodia. “It’s only since Trump is going to be the president and he’s a Republican and I ran on all three lines and I decided to caucus with the Republicans that they’re suddenly making an issue out of it — some, not all, very aggressively.”

Despite Democrats controlling more seats in the Senate, Felder’s decision to caucus with Republicans made GOP leader John Flanagan the majority leader. The Independent Democratic Conference, a seven-member breakaway faction, subsequently joined him in the majority alliance.

Felder’s alliance with the GOP has resulted in some significant aids to the Orthodox community. Yeshivah busing is now free and the state has doubled its funding for nonpublic schools in the four years since his advocacy.

“It’s not like I decided to caucus with the Republicans because Trump won,” Felder said. “I decided to caucus with the Republicans for the same reasons I decided to do it for the past few years, and that is because I try my best, no matter what’s going on, not to give up in representing what I think my constituents want me to do. And the fact that Trump is the president doesn’t change that. If Hillary Clinton would have been elected it certainly would not have changed it either.”

As in two previous times when Felder announced that he would caucus with the GOP, he was swamped with hate mail. But this time, coming weeks after Trump’s election, it was much worse, he said.

“This Trump election has certainly brought out the worst,” Felder asserted. “I haven’t been involved in it, but this election has given the opportunity for rabid haters and rabble-rousers — giving them the excuse, maybe, to say and do what they always wanted to do. Which is, they hate me and hate what I stand for, and now suddenly, they are using the Trump election as an excuse.”

While most of the calls were legitimate, he added, overall, “the octave, the volume, has increased substantially. The tone has become a lot more threatening, a lot more inappropriate — not illegal, though — than it’s ever been.”

To all callers, Felder says he instructed his staff to send them a copy of a Hamodia opinion piece he penned two weeks ago explaining why he made his decision. But a small group of people appeared at his office last Wednesday, bearing 65 signatures calling on him to not “undermine” the Democratic party by caucusing with the Republicans.

Felder said he feels comments by Mayor Bill de Blasio that the city has seen a rise in hate crimes is partially responsible for it.

“He knows that it’s been on the rise for the past two years, and the majority of these crimes are against Jews. We haven’t heard repeated outcry by the mayor,” Felder said. “And suddenly, when there is a hate crime against somebody who is not Jewish, the mayor makes a big deal made about it, that ‘hate crimes are on the rise.’”

De Blasio, he noted, is supporting Keith Ellison, a Muslim congressman from Minnesota who is “an open anti-Semite,” as the next chair of the Democratic National Committee.

“I would say it’s just the opposite,” Felder said. “The hate that’s been fueled and that’s been ruminating has been simmering for all these years by these rabid left-wing radicals. They have been condoning hate crimes for years without complaining.”