Israel Ancient Road to Kosel Unveiled, in Swipe at U.N. and Obama
Israel 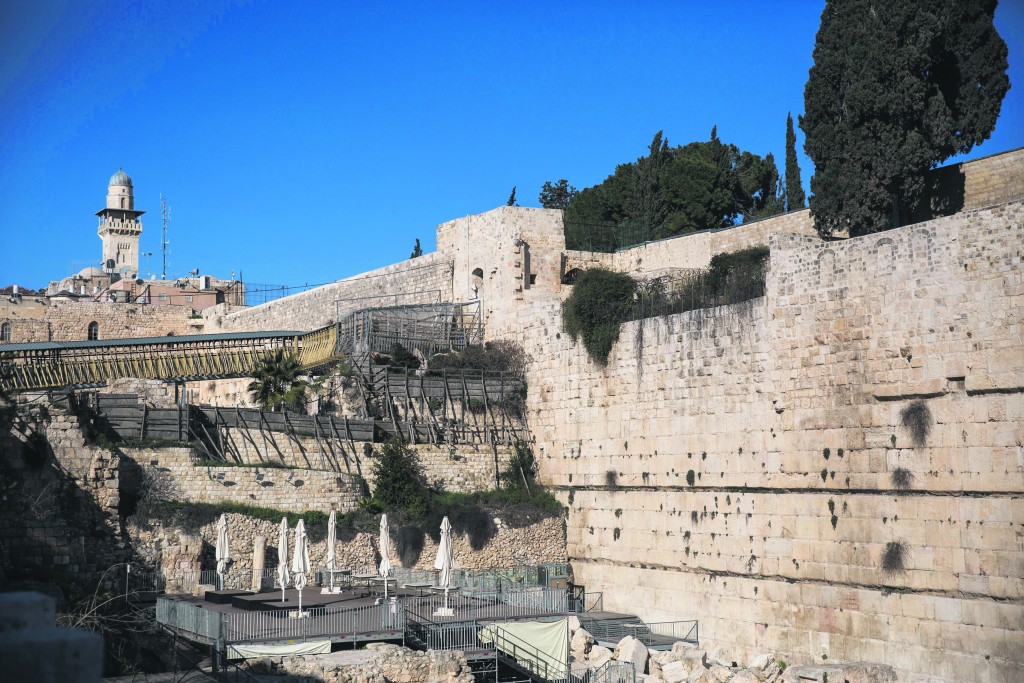 Israeli officials gathered in the City of David in Yerushalayim in a pouring rain on Tuesday to unveil a restored 2,000-year-old road leading to the Kosel, and to send a message to the Obama administration, the United Nations and the world that the Jewish connection to the holy site predates that of any other people.

Culture Minister Miri Regev declared: “Mr. President Barack Obama, I am standing here, on Chanukah 5777, on the route on which my forefathers walked 2,000 years ago. No resolution in any international forum is as strong as the steadfast stones on this street. No other people in the world has such a connection and link to its land, neither in Senegal, New Zealand, Ukraine nor Malaysia.”

Holding up a rare coin discovered during the excavations, Regev said that the archeological evidence at the site belies the contentions of last month’s UNESCO vote denying Judaism’s connection to its holiest site. “This coin, like many other findings, is evidence of the historical truth and our deep connection to Jerusalem,” said Regev.

“UNESCO announced several weeks ago that there is no such connection. The voting in Paris is ridiculous – you cannot undo a history of thousands of years. So, today we respond to this historical distortion with a clear voice: Jews lived in Yerushalayim, and the Jews will continue to live in Yerushalayim.”

Also in attendance were Yerushalayim Mayor Nir Barkat, members of Knesset and former IDF paratroopers Dr. Itzik Yifat, Tzion Karsenty and Chaim Oshri, who were among those who liberated the Old City in June 1967 and who are featured in David Rubinger’s iconic photograph showing the paratroopers gazing upwards at the Kosel.

“I’m excited to be here today at this event to show where ancient Jews once walked near the Wall we liberated 50 years ago,” said Zion Karasenti, as Yitzhak Yifat and Haim Oshri nodded their approval.

“Nothing, and no U.N. resolution, will ever take the Western Wall away from us.”

The 150-foot route, which is currently being excavated in the City of David by the Israel Antiquities Authority, is believed by archeologists to be 2,000 years old and served as a main street in the later Bayis Sheini era. The street, which was built in the Herodian period, starts at the Siloam Pool and ends below the steps at Robinson’s Arch at the Kosel.