Massive WWII Bomb Is Defused in German Town of Augsburg

Explosives experts have defused a large World War II aerial bomb in the southern German city of Augsburg just before 7:00 p.m. Sunday, clearing the way for thousands of evacuated residents to return to their homes.

Some 32,000 households with 54,000 residents in the city’s historic central district were forced to leave by 10 a.m. Sunday morning so experts could handle the bomb.

They had to clean seven decades of muck off the bomb so they could find and disable its three detonators. The munition’s large size — 1.8 tons — suggested it was a so-called blockbuster of the type dropped by British forces, with the aim of blowing surrounding buildings apart so that accompanying incendiary bombs could start fires more easily.

The bomb was uncovered last week during construction work in the city’s historic central district.

Police rang doorbells and used vans with loudspeakers to urge procrastinators to leave ahead of the 10 a.m. deadline. Schools and sports facilities were opened as shelters.

Finding World War II bombs is not unusual in Germany. Much of Augsburg’s historic center was destroyed on Feb. 25-26, 1944, when hundreds of British and U.S. bombers attacked the city. 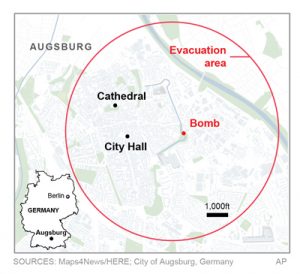