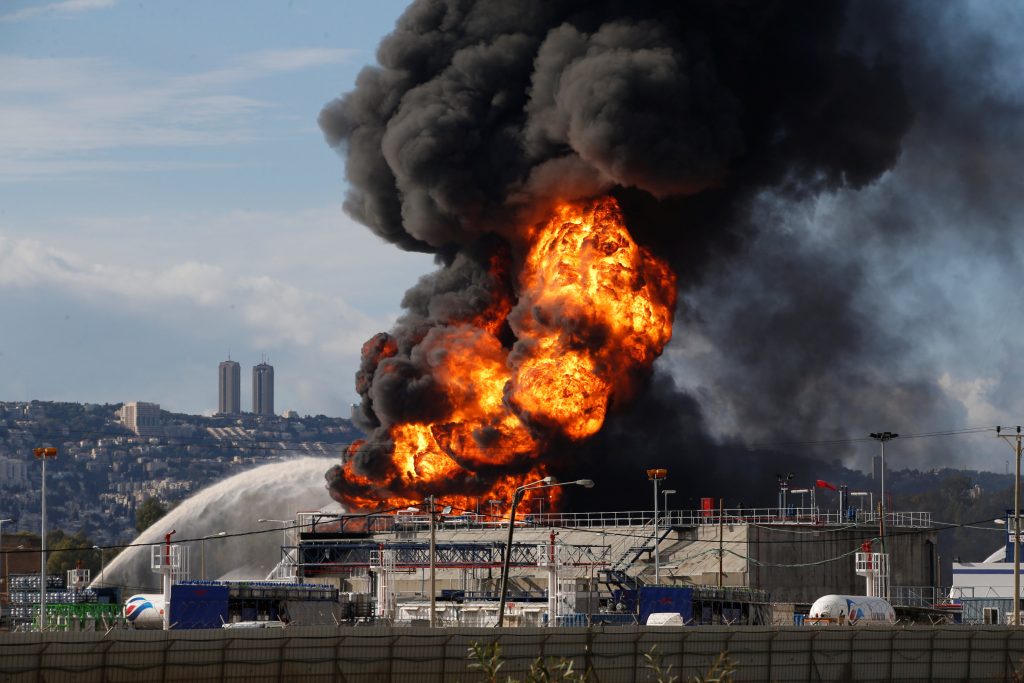 Safety officials called on residents of neighborhoods in Haifa to remain indoors Sunday morning, as dozens of firefighters battled a blaze at the Bazan refinery in Haifa Bay. The fire broke out Sunday morning and quickly spread to a storage tank of gasoline. Police said that there was no danger to the public, but that it would be better to remain indoors in order to avoid breathing in the fumes that are emanating from the blaze. No injuries have been reported. It’s unlikely that the fire will be brought under control before the afternoon, officials said.

Firefighters have closed off several major highways in the Haifa Bay area, including roads 4 and 22. The Environment Ministry is organizing a task force to examine the cause of the fire, and is providing guidance and instructions for factories and businesses in the area on how to protect themselves from the fire. In a statement, Bazan said that the 12,000 cubic meter tank was only 10 percent full when the fire broke out, and that it was not located near production facilities.

Several months ago, the Haifa municipality ordered the closure of several Bazan facilities due to “a series of mishaps, some of which are apparently due to negligence.” MK Yael Cohen-Paran said that “the refineries endanger the public. They pollute the air, and now they pose a danger of a major blaze throughout the city. Keeping such a large amount of flammable material so close to population centers is a major safety problem. We cannot afford to wait until there is a tragedy in the Haifa Bay area. The government must make clear that industries cannot pollute the air and endanger civilians in this manner.”