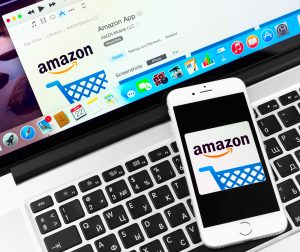 Amazon has seen its already dominant share of online shopping rise in the walk-up to the final days of the year-end shopping season, says e-commerce consultancy Slice Intelligence.

Data gathered by the consultancy indicated that 46 percent of online spending during the week ending Dec. 17 went to Amazon, up from 42.3 percent the previous week.

That’s way more than any other retailer selling online, according to Slice. The runner-up was Best Buy, which accounted for 2.9 percent of online spending. Amazon’s nemesis Wal-Mart came up third, with 2.6 percent.

The average Amazon order was $67.

Slice Intelligence says it mines data from email receipts from hundreds of thousands of retailers and also tracks a large panel of online shoppers. The company also tracked how quickly packages land on customers’ doorsteps. The average package from sellers took three days to deliver versus five days last year.

That’s despite what carriers say are record shipments.

Experts have said that since the beginning of the critical year-end shopping season, shipments are up 12 percent.

Also, the logistics problems that have frustrated year-end shoppers in recent years seem to have been kept in check due to massive investment by Amazon and by third-party carriers such as FedEx and UPS.