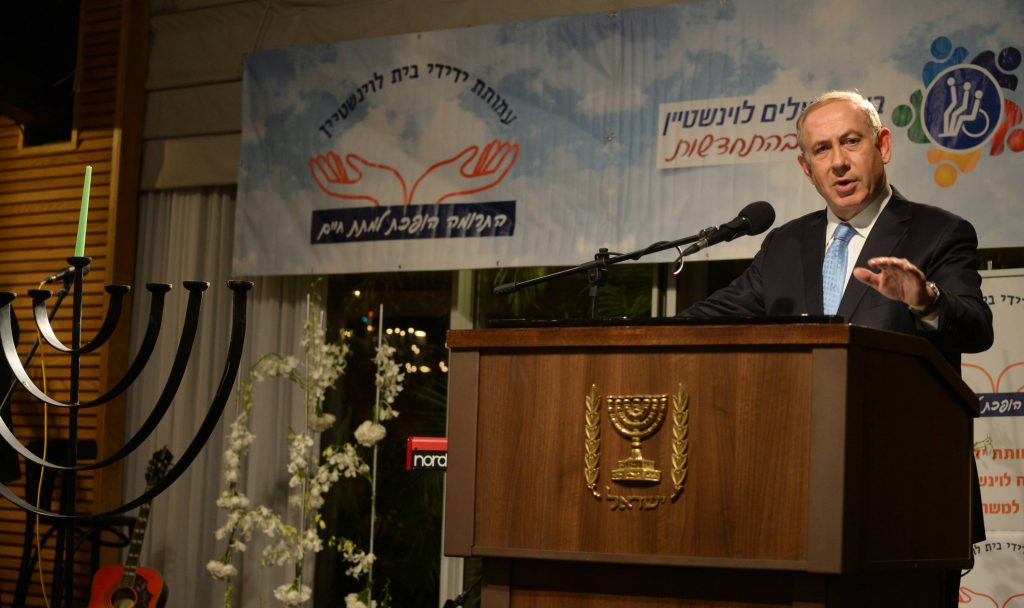 In his first public response to the U.N. Security Council’s resolution condemning Israel’s settlement activity, Prime Minister Binyamin Netanyahu said that Israelis need not worry. “The decision is unbalanced and unfair, but we will overcome it,” Netanyahu said at an event honoring injured IDF soldiers. “The decision says that the Jewish Quarter, and the Kosel, are occupied. There can be no crazier decision than this.

“There is also a threat in this decision to impose a settlement ban on Israel. The last person to try that was former President Jimmy Carter, who just recently said that Hamas was not a terror group – and we survived that as well,” Netanyahu said. “With this decision, President Obama violated the commitment to Israel of all presidents since Carter- and a commitment he himself made. This decision will not further peace.” Israel, he said, “rejects this decision. We rejected the 1975 resolution that said that Zionism is racism, and that was rescinded in the end. We reject this, and it too will be rescinded.”

Netanyahu added that “Israel is not alone. I spoke with many American leaders, both in Congress and in the incoming administration, and they expressed their support for Israel – and their frustration with decisions like this against Israel. They promised that they would do everything necessary to protect Israel,” including legislating “against countries and groups that try to harm Israel.” Israel was also reconsidering all assistance to institutions and countries that operate against Israel, said Netanyahu, and he had already ordered halting Israeli funding of several U.N. organizations that “were particularly opposed to us.” In the end, Netanyahu said, “from the bitter will come sweet,” with the decision backfiring on the U.N. and the anti-Israel forces in the world.

Israeli officials were fuming, as condemnations of the U.N.’s failure to veto an anti-Israel resolution rolled in from top officials – while leftist leaders blamed it all on Binyamin Netanyahu. In a statement Friday, the prime minister’s office accused the administration of President Barack Obama of “colluding” with the Palestinians to “gang up” on Israel. “At a time when the Security Council does nothing to stop the slaughter of half a million people in Syria, it disgracefully gangs up on the one true democracy in the Middle East, Israel, and calls the Western Wall “occupied territory. The Obama administration not only failed to protect Israel against this gang-up at the U.N., it colluded with it behind the scene,” the statement said, adding that “Israel looks forward to working with President-elect Trump and with all our friends in Congress, Republicans and Democrats alike, to negate the harmful effects of this absurd resolution.”

The Security Council resolution that was adopted late Friday – by a vote of 14-0, with one abstention – condemns “ all measures aimed at altering the demographic composition, character and status of the Palestinian Territory occupied since 1967, including East Jerusalem,” and expresses grave concern that continuing Israeli settlement activities are dangerously imperiling the viability of the two-state solution based on the 1967 lines. It also lays the basis for sanctions against Israel, “calling upon all States to distinguish, in their relevant dealings, between the territory of the State of Israel and the territories occupied since 1967.” Included in those “territories” are all Yerushalayim neighborhoods built since 1967, including Ramot, Gilo and Ramat Shlomo, as well as the “settlement blocs.” The construction in these places is “illegal” and violates international law.

The resolution was co-sponsored by New Zealand and Senegal. In response, Israel recalled its ambassadors to both countries for consultations, and canceled aid programs to Senegal. A visit to Israel by the Senegalese foreign minister to Israel next month was canceled. “We have a lot to offer the world, but we will not offer it to those who work against us,” Netanyahu said Motzoei Shabbos. “We are reconsidering our entire array of relationships in the wake of this decision.”

The condemnations in Israel of the resolution was loud and widespread. National Infrastructure Minister Yuval Steinitz said that “the Obama administration has decided to abandon Israel to the anti-Israel forces at the U.N. This was not a decision against the settlements, but a decision against Israel. This was a hurtful, injurious, and childish act. This is not the way friends work together.”

Jewish Home chairman Naftali Bennett said that “thousands of terrorists are looking at this decision and see it as a call to arms. This decision is the direct result of following the policy of concessions following the Oslo Accords. This decision, like others, belongs in the trash bin of history. It’s time to make a U-turn – from concessions to proclaiming sovereignty over Area C, starting with Maale Adumim.”

Knesset chairman Yuli Edelstein called the decision “weird,” adding that “the U.N. has taken an absurd decision, thanks to the lack of leadership of the U.S. If Ramot and the Kosel are occupied territories, then the U.N. should declare that the U.S. must return Manhattan to the Indians.” In a statement, the Yesha Council said that the decision was “not surprising. This is typical of a president who has operated for years against Israel while ignoring every other event in the Middle East. Israel halted building and planning in Yehudah and Shomron for years, and this didn’t make a difference. It’s time for us to take responsibility ourselves and to impose Israeli sovereignty in Yehudah and Shomron, and to begin building immediately. That would be the appropriate response to this anti-Semitic U.N. decision.”

Opposition parties for the most part did not celebrate the resolution, but did take the opportunity to further denigrate Netanyahu. Yesh Atid chairman Yair Lapid called the decision “unfair, dangerous, and hypocritical,” while former Prime Minister Ehud Barak called it “denigrating.” Both, however, blamed Netanyahu, as did Zionist Camp MK Tzippy Livni, who said that “Netanyahu knew this was coming, and still blindly went down the path that led to this decision with his settlement policies.” Zehava Gal-on of Meretz, meanwhile, praised the decision, saying that it “could be the first step towards Israel’s exiting the West Bank and ending the occupation.”