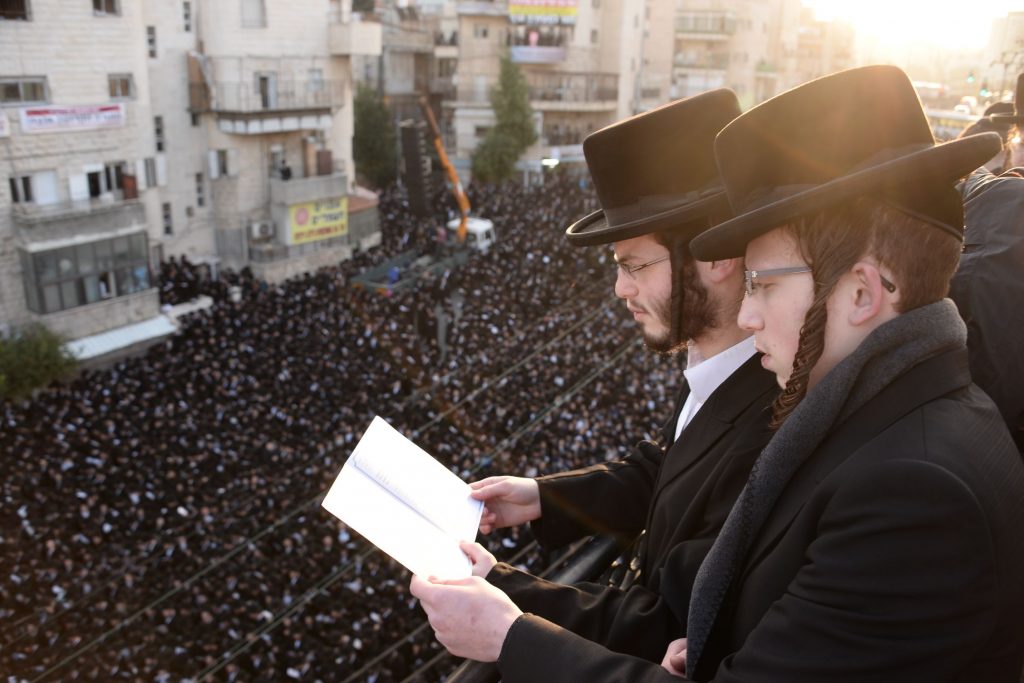 Led by Gedolei Yisrael, shlita, tens of thousands of people attended a tefillah rally in Yerushalayim on Thursday afternoon in the wake of religious persecution and the disruption of davening in a shul in Arad two weeks ago.

The demonstration, across Bar Ilan Street, was an expression of pain and an outpouring of heartfelt tefillos for an end to the violation of all that is holy in Klal Yisrael and to chillul Shem HaShamayim. This was the third and final rally, after earlier rallies in Bnei Brak and in Ashdod.

Participants — young and old, as well as many children — came from every stream and from every community, many carrying sifrei Tehillim and siddurim. The organizing committee distributed a booklet with Tefillas Minchah and the Tehillim that would be recited, as well as Kabbalas Ol Malchus Shamayim.

Dozens of signs and placards bearing the message of the demonstration were hung on homes and poles in the area. They expressed the pain at the desecration of holiness, and the confidence that the holy Torah, which has prevailed throughout the generations, will prevail now as well.

Gedolei Yisrael from across the spectrum had called on their community members to express their anguish at the ongoing chillul Shabbos and the desecration in Arad, and their fear of what this situation could lead to in the rest of the country.

The atzeres was held with decorum and absolute order. It began with Tefillas Minchah.

After the davening, Harav Yitzchak David Grossman, shlita, Rav of Migdal HaEmek, delivered piercing remarks about the desecration and the obligation that every person bears to repair the breach. His words were centered around the holiness of a shul, and he cited sources and stories of tzaddikim in previous generations, focusing on the awesomeness of a makom tefillah and how terrible it is when that holiness is not preserved. He expressed the pain over the incident in Arad, which was done entirely to banish Jews from a shul and prevent them from davening.

In the face of the attempts to desecrate a shul, he said, we have to intensify our respect for the sanctity of shul and resolve not to speak in shul or be distracted from our tefillos. He added that we are all one nation, just that at times, there are those who are incited, chas v’shalom, against the chareidi community.

The mekubal Harav David Batzri, shlita, recited Kabbalas Ol Malchus Shamayim at the amud. The entire crowd cried the words of Shema Yisrael and Hashem Hu HaElokim together, followed by the piyut of Aneinu.

The resolutions of the atzeres were read aloud by Rabbi Avishai Stockhammer, the former secretary of the Moetzes Gedolei HaTorah. The organizers thanked the police forces for securing the event.

At the gathering it was stressed that in the city of Arad, the chareidi community is persecuted constantly. The harassment and the incitement against chareidim, along with the clear desire to see them out of the city, are attributed by the residents to the municipality, headed by Mayor Nissan ben Chamo of the Yesh Atid party, and the municipality’s legal team.

The current mayor was elected on an agenda of battling the chareidim, and community members report active efforts to thwart chareidi settlement in the city.