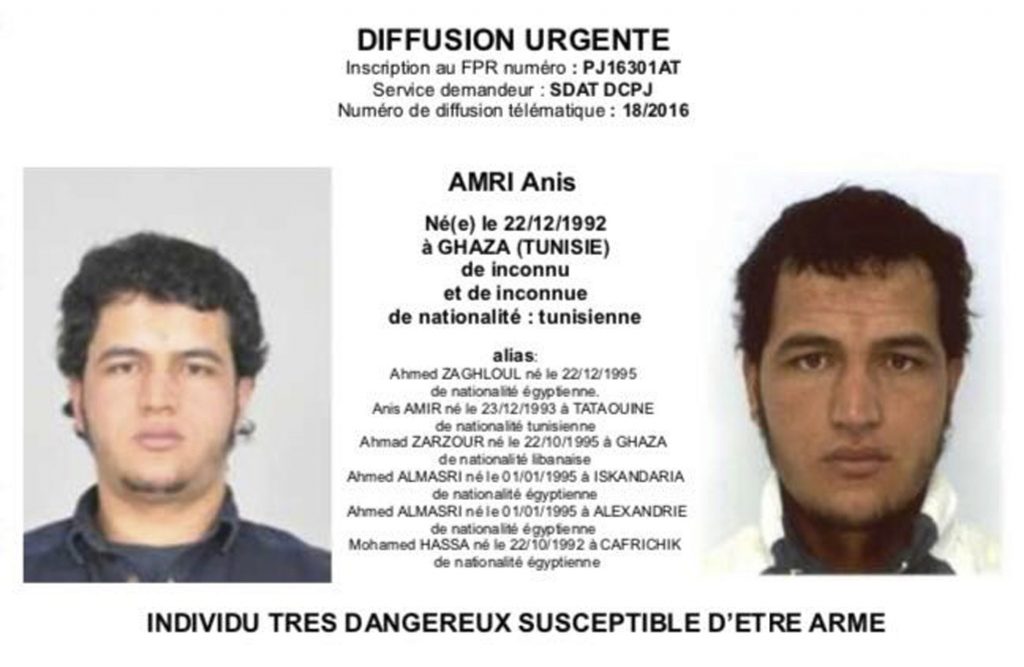 Authorities across Europe are scrambling to find a Tunisian man wanted as a suspect in Monday’s attack on a busy market in Berlin.

The search prompted police in Denmark to search a Sweden-bound ferry in the port of Grenaa after receiving tips that someone resembling suspect Anis Amri had been seen there. But police said Thursday they found nothing indicating his presence.

German authorities issued a wanted notice for Amri on Wednesday and offered a reward of up to 100,000 euros ($104,000) for information leading to his arrest.

German officials had deemed Amri, who arrived in the country last year, a potential threat long before the attack. They had been trying to deport him after his asylum application was rejected, and politicians are bickering over what consequences should be drawn.

Now the international manhunt for Anis Amri — considered the prime suspect in Monday’s deadly rampage — is raising questions about how closely German authorities are monitoring the hundreds of known Islamic extremists in the country.

The issue puts new pressure on Chancellor Angela Merkel, who is running for re-election next year. Critics are lambasting her for allowing hundreds of thousands of asylum-seekers to enter the country, allegedly without proper security checks.

Among them was Amri, a convicted criminal in both Tunisia and Italy with little chance of getting asylum who successfully evaded deportation from Germany even as German authorities rejected his asylum application and deemed the 24-year-old a possible jihadi threat.

He is suspected in the attack that left 12 people dead and 48 injured Monday evening in Berlin. Health officials said 12 of the injured had very serious wounds.

Within hours it emerged that the man authorities warned could be “violent and armed” had in fact been known to them for months as someone with ties to Islamic extremists who used at least six different names and three different nationalities.

“People are rightly outraged and anxious that such a person can walk around here, keep changing his identity and the legal system can’t cope with them,” said Rainer Wendt, the head of a union representing German police.

Authorities had initially focused their investigation on a Pakistani man detained shortly after the attack, but released him a day later for lack of evidence. After finding documents belonging to Amri in the cab of the truck, they issued a notice to other European countries early Wednesday seeking his arrest.

According to Ralf Jaeger, the interior minister of North Rhine-Westphalia state, Amri arrived in Germany in July 2015 as the influx of asylum-seekers was nearing its peak.

Although registered in the west of the country, near the Dutch border, Amri had moved around Germany regularly since February, living mostly in Berlin, said Jaeger.

Within months of his arrival, authorities had added Amri to a growing list of potentially violent Islamic terrorists, not all of them asylum-seekers.

“Security agencies exchanged information about this person in the joint counterterrorism center, the last time in November,” said Jaeger.

State prosecutors in Berlin even launched an investigation of Amri on March 14 following a tip from federal security agencies, who warned that he might be planning a break-in to finance the purchase of automatic weapons for use in a possible future attack.

The surveillance measures were called off in September, by which time Amri had disappeared from his regular haunts in Berlin, prosecutors said.

Separately, Amri’s asylum application was rejected in July. German authorities prepared to deport him but weren’t able to do so because he didn’t have valid identity papers, Jaeger said. In August they started trying to get him a replacement passport.

“Tunisia at first denied that this person was its citizen, and the papers weren’t issued for a long time,” Jaeger said. “They arrived today.”

It wasn’t clear whether Germany was aware of Amri’s previous brushes with the law, both in his homeland and in Italy, where he lived until last year. Tunisia’s Mosaique FM radio reported that he was sentenced to several years in prison in both countries for violent crimes.

The Italian news agency ANSA reported that Amri was ordered expelled after his prison time in Italy. However, Tunisian authorities didn’t finish all the paperwork in the required time, so Amri never was sent back to Tunisia, it reported.

The Islamic State terror group, which claimed responsibility for Monday’s attack, did not identify Amri as the man witnesses saw fleeing from the truck, but described him as “a soldier of the Islamic State” who “carried out the attack in response to calls for targeting citizens of the Crusader coalition.”

Germany’s Interior Minister Thomas de Maiziere cautioned that he was “a suspect, not necessarily the perpetrator.”

“We are still investigating in all directions,” he said.

A spokesman for Tunisia’s anti-terrorism judicial police said they questioned Amri’s family members at their home Wednesday in the central Tunisian town of Oueslatia.

Spokesman Sofiane Selliti did not say how many people were questioned. His family lives in poverty and his parents are divorced, according to Tunisia’s Mosaique FM radio, which reported that the father said he had no contact with his son, although his other sons did.

Some German lawmakers have called for consequences regardless of whether Amri turns out to have been behind the wheel of the truck in Berlin.

“In my view we experienced a major shift on Monday,” said Stephan Mayer, a member of Merkel’s center-right bloc. “Terrorism has reached a new level in Germany. It’s shaken the nation and citizens are worried. I think citizens wouldn’t accept it if we simply returned to the political order of the day.”

Mayer proposed extending the period that people can be held in detention prior to deportation, to give authorities more time to gather the necessary paperwork. He said authorities should also be able to deport people deemed a threat to public order.

Wendt, the police union official, said keeping tabs on all of these people was a major challenge.

“From a manpower perspective it would … be unimaginable to keep all potential threats under police surveillance round the clock,” he said.