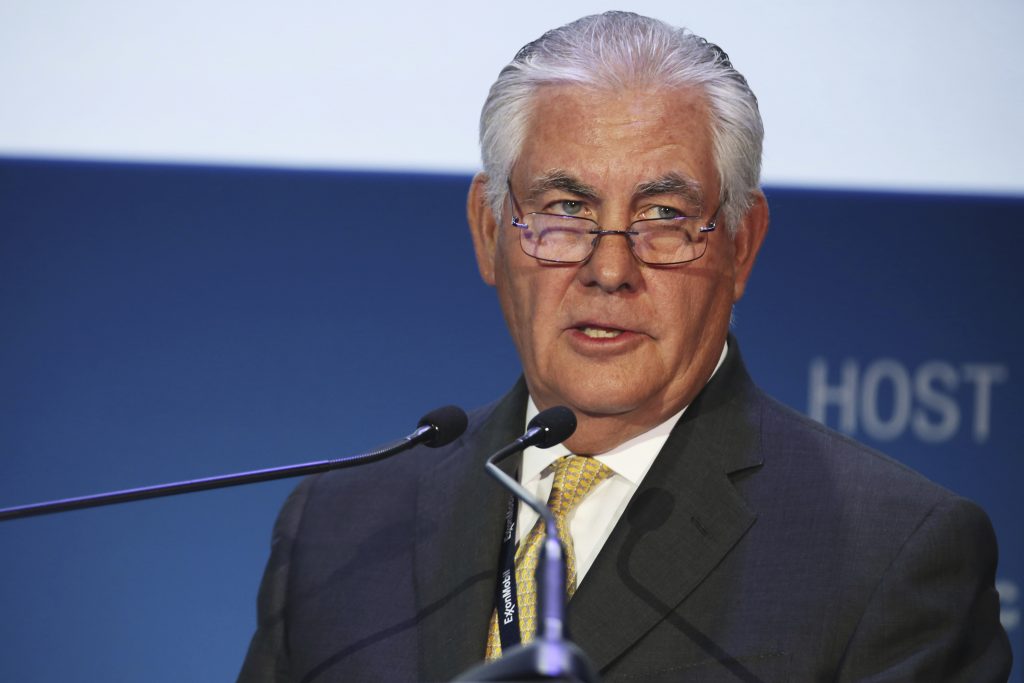 Throughout the presidential campaign, the Bush family and many of its Republican allies turned their backs on Donald Trump. Now, they’re finding common cause with Trump over his pick to lead the State Department: Exxon Mobil CEO Rex Tillerson, who has long orbited their same political, philanthropic and business worlds.

Former President George W. Bush, who has largely avoided politics since leaving office in 2009, heaped praise on Tillerson in a recent phone call to Sen. Bob Corker, the Tennessee lawmaker who will oversee the secretary of state confirmation hearings. Jeb Bush, Tillerson’s preferred candidate in the 2016 race, called the Exxon executive a “good man and accomplished leader.”

Dick Cheney, Condoleezza Rice and Robert Gates — Bush’s vice president, secretary of state and secretary of defense — have all offered glowing endorsements. Gates, who runs a consulting firm with Rice that represents Exxon, first put Tillerson on Trump’s radar when the president-elect was dissatisfied with his more conventional options.

Despite the high-level backing, Tillerson faces obstacles in his path to Foggy Bottom. He has no government experience, having spent his whole career at Exxon. Senators in both parties have raised questions about his ties to Russian President Vladimir Putin, a relationship that’s particularly eye-catching given uncertainty about Trump’s own connections to Russia.

Corker said that while the support from the highest levels of the Republican national security establishment won’t wipe away senators’ questions about Tillerson, it could ease anxieties.

“Most people will look at that and understand that he’s not outside the mainstream,” said Corker, adding that George W. Bush was “effusive” in his praise for Tillerson when they spoke last week.

While Trump was never fully embraced by more traditional Republicans, his rejection by the Bush family and its national security apparatus was particularly glaring. The family produced the last two Republican presidents and had hoped for a third in 2016. The two Bush presidencies also defined the GOP’s foreign policy philosophy as one that saw overseas military intervention as a means to pre-empt attacks on the U.S. and promote democracy abroad.

Trump has vowed to take the Republican Party in a new direction, both in style and substance. He showed no reverence for the Bush family during the campaign, blasting George W. Bush over the Iraq war and deriding his administration’s focus on nation building abroad. He was particularly hard on former Florida Gov. Jeb Bush, who ran against Trump in the GOP primaries.

Trump transition officials say the Bush family has not coordinated its support for Tillerson with the president-elect, though Gates and Rice did directly offer their support to Trump’s team.

Like the Bush family, Tillerson has strong ties to Texas and its vast oil industry. Presidents George H.W. Bush and George W. Bush ran oil companies before going into politics. Tillerson, a native of Wichita Falls, Texas, joined Exxon out of college as a production engineer before moving through the oil giant’s executive ranks on his way to becoming CEO.

The bonds between Texas oilmen can run as deep as their wells. They share the same politics, bankroll the same politicians, attend the same charity balls, and, often, talk business with the same twang. It’s a club of wealth, but also a culture.

Tillerson’s relationship with the Bush family dates back at least to President George W. Bush’s years as Texas governor, according to people who know both men. The ties have moved beyond the political realm and into philanthropy, with some of Exxon’s efforts overlapping with Bush’s foundation.

Tillerson’s philanthropic work on behalf of Exxon has also overlapped with Jeb Bush, who promoted STEM education — science, technology, engineering and math — as governor of Florida. When Jeb Bush joined the crowded field of Republicans running for president in 2016, he quickly became Tillerson’s choice. The executive donated to both Bush’s campaign and his super PAC.

Campaign finance records show Tillerson has been a regular donor to other establishment Republicans who cringed at the prospect of Trump becoming the party’s nominee. He gave money to Mitt Romney, the 2012 GOP presidential candidate who Trump also considered for secretary of State. He also donated to House Speaker Paul Ryan and Senate Majority Leader Mitch McConnell, who were lukewarm Trump supporters at best during the presidential race.