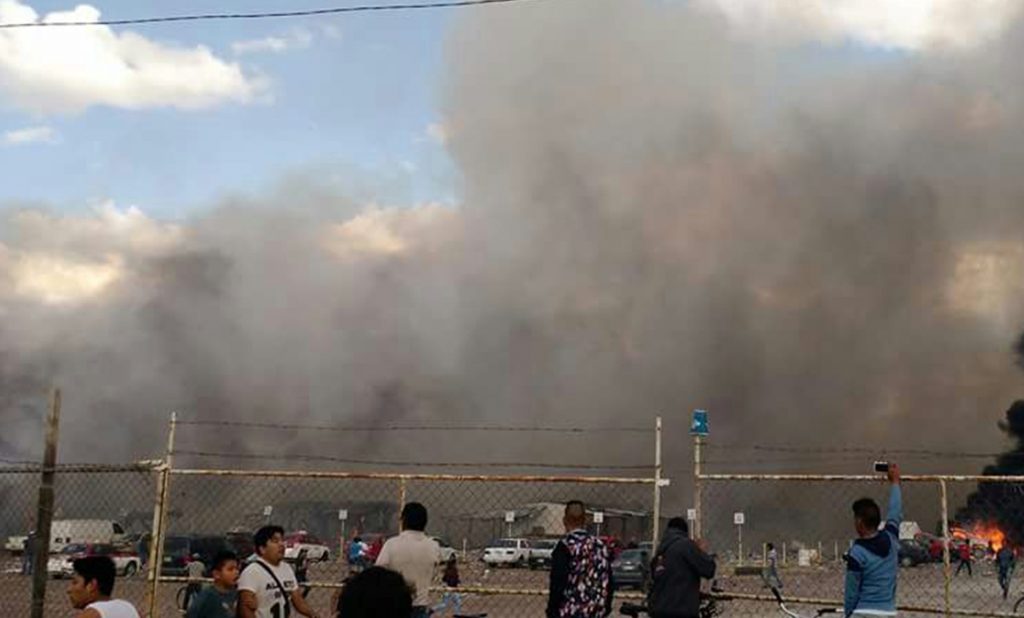 The death toll in a series of explosions at a fireworks market outside Mexico City has risen to 31, an official said Wednesday, as authorities worked to identify badly burned bodies and determine the cause of the tragedy.

Sixty others were injured in the chain-reaction blasts, which occurred midafternoon Tuesday at an open-air market in the city of Tultepec in Mexico state.

Among the 31 confirmed dead are at least 14 males, including seven minors, and 16 women, mostly of as-yet-undetermined ages, Alejandro Gomez, the chief state prosecutor, said in an interview.

Of those killed, the official said, five died at various hospitals and 26 succumbed at the site — the San Pablito market, 24 miles north of Mexico City.

The expansive market, Mexico’s largest and best-known fireworks bazaar, hosted some 300 vending stalls. Many were reduced to rubble in the spectacular sequence of explosions.

The market is legal and regulated by various levels of government, including the Mexican military. Before Tuesday’s blasts, local officials had insisted publicly that oversight had been stiffened and safety improved at the market, which suffered several explosions a decade ago.

But desperate relatives and friends of the missing complained that officials had not done enough to ensure safety at the sprawling market. Anxious kin of the missing have been converging on hospitals and morgues in the area, seeking to learn the fate of their loved ones.

“It’s not the first time a tragedy like this occurred, and the government always says, ‘It will never happen again,’” said Francisco Maldonado, 47, who was among those at a hospital inquiring about a relative injured in the blasts. “The people go to those places believing the government that everything is safe, and it’s not true. … It’s not possible that these things keep on happening.”

The casualties are thought to include both workers at the market and shoppers who were seeking to buy fireworks. Fireworks are a popular part of celebrations both big and small in Mexico.

Complicating the process of identifying the dead, the prosecutor said, was the fact that many of the victims were badly burned.

Meanwhile, authorities were searching through the rubble and interviewing witnesses as they tried to pinpoint what triggered the series of thunderous explosions, which shook the ground almost a mile away. The blasts sent columns of smoke and balls of fire hundreds of feet into the air. Amateur video captured the spectacle; the scenes have been repeatedly looped on Mexican TV.

Police were investigating a report that a fireworks rocket exploded at one of the stands, sparking the chain reaction, the state prosecutor confirmed. The salesman working at the stand where the initial explosion reportedly took place was among those who perished, the official said

The fireworks industry is big business in Tultepec, employing hundreds if not thousands in and around the city of 50,000.

Eight days before Tuesday’s blasts, town officials boasted publicly that the market — which they labeled the largest of its kind in Latin America — was safe and equipped with the latest safety gear.

A Dec. 12 press release from the city of Tultepec quoted Juan Ignacio Rodarte Cordero, director general of the Mexican Institute of Pyrotechnics, as saying that the stalls in San Pablito market were “perfectly designed and with sufficient space to avoid a chain-reaction conflagration in the case of a spark.”

The same release also quoted German Galicia Cortes, identified as the market president, assuring visitors that they would find “a safe place” featuring all “necessary” security equipment, including fire extinguishers, water, sand, shovels, picks and “qualified people who know how to act in case of any incident.”

Local authorities estimated that 100 tons of fireworks would be sold at the market between August and the end of the year.

Of the 60 people who suffered injuries, the prosecutor said, 47 remained hospitalized early Wednesday. Nine others were released after treatment and four were treated at the scene of the explosion.