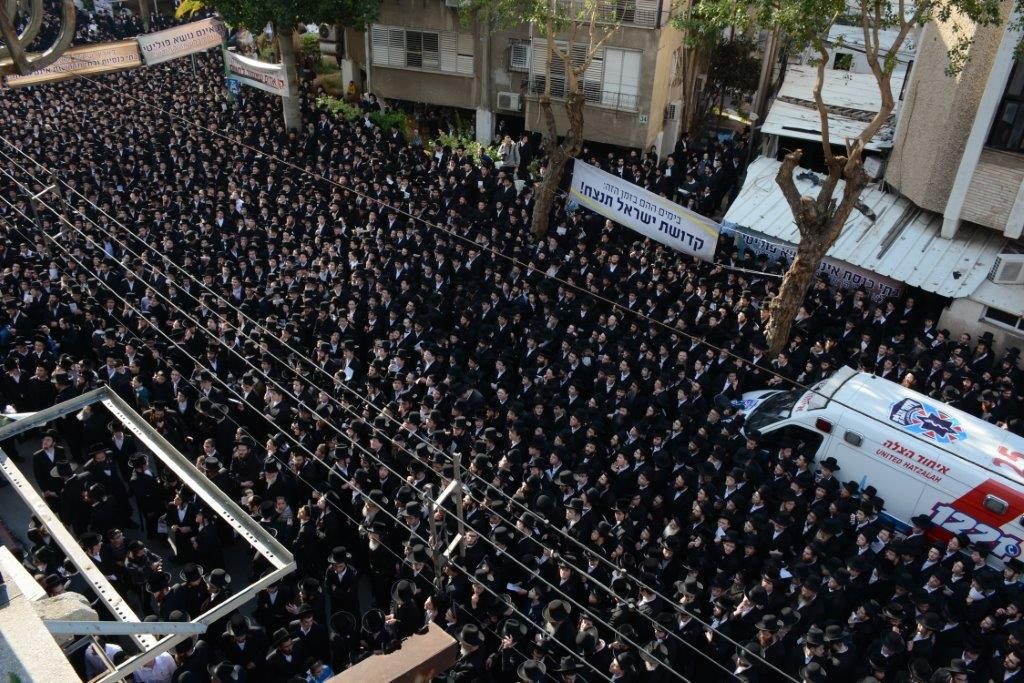 Led by Gedolei Yisrael, shlita, tens of thousands of people attended a tefillah rally in Bnei Brak on Tuesday in the wake of religious persecution and the disruption of davening in a shul in Arad two weeks ago.

The demonstration was an expression of pain and an outpouring of heartfelt tefillos for an end to the violation of all that is holy in Klal Yisrael and to chillul Shem Shamayim. A similar event will be held in Ashdod on Wednesday and in Yerushalayim on Thursday.

The area was closed by police about an hour before the event began. More than 100 officers secured the site, and all public transportation routes were diverted from the area.

Participants — young and old, as well as many children — came from every stream and from every community, many carrying sifrei Tehillim and siddurim. The organizing committee distributed a booklet with Tefillas Minchah and the Tehillim that would be recited, as well as Kabbalas Ol Malchus Shamayim.

Dozens of signs and placards bearing the message of the demonstration were hung on homes and poles in the area. They expressed the pain at the desecration of holiness, and the confidence that the holy Torah, which has prevailed throughout the generations, will prevail now as well.

Gedolei Yisrael from across the spectrum had called on their community members to express their anguish at the ongoing chillul Shabbos and the desecration in Arad, and their fear of what this situation can lead to in the rest of the country.

The atzeres in Bnei Brak was held with decorum and absolute order. It began and finished on time, as announced. A minute after 1:30 Tefillas Minchah began, with everyone davening in one minyan led by Harav Yaakov David Weintraub, who stood on the balcony of the home of Harav Nosson Einfeld, shlita, on Chazon Ish Street, opposite Rav Dessler Street. It was absolutely silent during Shemoneh Esrei. The event was emceed by Rabbi Shlomo Kostelitz.

After the davening, Harav Elimelech Biderman, shlita, delivered piercing remarks about the desecration and the obligation that every person bears to repair the breach. His words were centered around the holiness of a shul, and he cited sources and stories of tzaddikim in previous generations, focusing on the awesomeness of a makom tefillah and how terrible it is when that holiness is not preserved. He expressed the pain over the incident in Arad, which was done entirely to banish Jews from a shul and prevent them from davening.

In the face of the attempts to desecrate a shul, he said, we have to intensify our respect for the sanctity of shul and resolve not to speak in shul or be distracted from our tefillos.

Harav Daniel Zar, shlita, stressed that aside from the actual violation of the shul, it is no less painful when one considers what brought it about. First of all, there is the severe incitement. But it is extremely painful that these people do not even know what they desecrated! Unlike their fathers, who knew how to appreciate and honor the holiness of a shul, they are so far removed that they do not understand how serious their deed was. This can be compared to a person who stabs a knife into his heart and doesn’t realize that he has brought about his own end. They do not know that the shul is the heart of Am Yisrael. If they would know the power of a shul, they would place bears and lions to protect it, as Chazal said of the nations of the world regarding the Beis Hamikdash.

Harav Amnon Sabag, shlita, recited Kabbalas Ol Malchus Shamayim at the amud. The entire crowd cried the words of Shema Yisrael and Hashem Hu Ha’Elokim together, followed by the piyut of Aneinu.

The resolutions of the atzeres were read aloud by Harav Mordechai Stern, the secretary of the Moetzes Gedolei HaTorah. The organizers thanked the police forces for securing the event. It ended at exactly 2:30, and people dispersed in an orderly fashion.

At the gathering it was stressed that in the city of Arad, the chareidi community is persecuted constantly. The harassment and the incitement against chareidim, along with the clear desire to see them out of the city, are attributed by the residents to the municipality, headed by Mayor Nissan ben Chamo of the Yesh Atid party, and the municipality’s legal team.

The current mayor was elected on an agenda of battling the chareidim, and community members report of active efforts to thwart chareidi settlement in the city.

The residents of Arad say that until now they have kept quiet and did not involve the general public in their battle for their rights. But now things have reached the tipping point — when hooligans burst into the central Ashkenazi shul in the city, iphones in hand, desecrating Shabbos in public, in front of the aron kodesh, with mixed genders and women singing that desecrated the sanctity of the shul.

Community members say that the disruptors were inspired by the winds blowing from the municipality, which wants to banish the chareidim from the shul with the claim that their allocation has expired. It has carried out selective enforcement, something that the chareidi residents charge is not legal because dozens of members of others communities are in the same status, but the municipality is not exercising this clause against them.

Community residents point out that Arad’s municipality — a Jewish city —submitted a brief to the court as though the shul is a danger to the public peace (which the court rejected out of hand.) They relate that the municipality, in its eagerness to fight against anything holy, issued demolition orders for sukkahs, on Erev Succos, effective immediately. The municipality also issued demolition orders for eiruv poles, does not stop battling against the Shabbos sirens, and seeks to close 10 shuls. Residents also charge that the municipality negates the civil rights of its chareidi residents, withholding from them educational institutions and kindergartens, including those for special education. They say it does everything to dog the footsteps of the chareidim to make them flee the city and prevent the arrival of new chariedi residents.

It is for these reasons that Gedolei Yisrael called for these demonstrations in the three big cities.