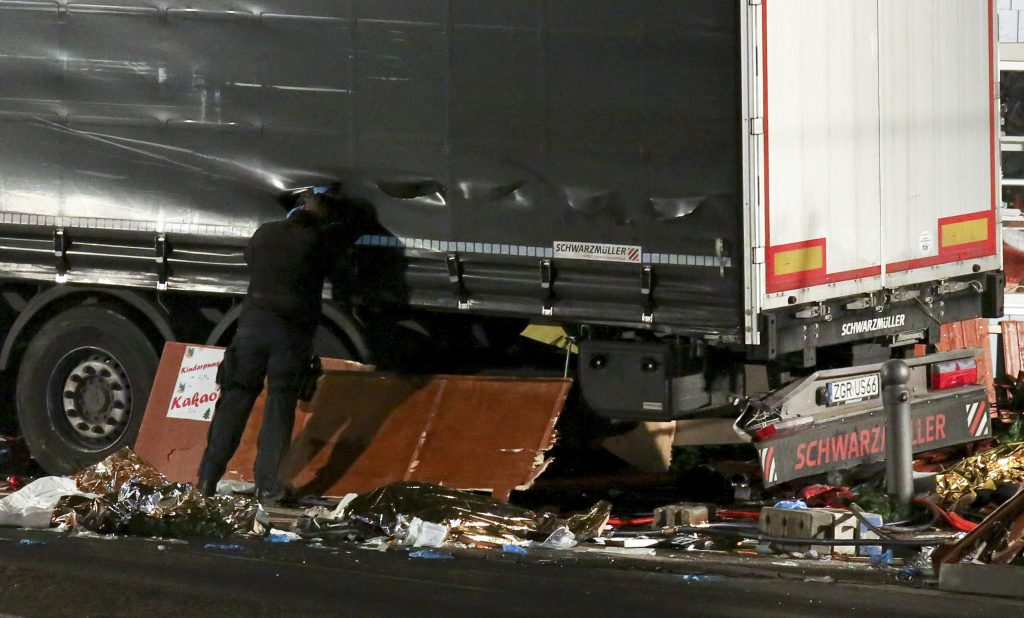 A truck rammed into a crowded market in central Berlin on Monday evening, killing at least nine people as it tore through tables and wooden stands.

The truck driver was arrested; German newspaper Welt reports that he is Pakistani. A Polish passenger in the truck was found dead.

The truck crashed into the market outside the capital’s popular market at the Kaiser Wilhelm Memorial Church. AP footage showed a large Scania truck with its windshield smashed out on the sidewalk alongside the market, with a swarm of ambulances nearby.

The incident came less than a month after the U.S. State Department called for caution in markets and other public places, saying extremist groups including Islamic State and al-Qaida were focusing “on the upcoming end of year season and associated events.”

Islamic State and al-Qaida have both called on followers to use trucks in particular to attack public places. On July 14, a truck plowed into a Bastille Day crowd in the southern French city of Nice, killing 86 people. Islamic State claimed responsibility for that attack, which was carried out by a Tunisian living in France.

Mike Fox, a tourist from Birmingham, England, told The Associated Press at the scene in Berlin that the large truck missed him by about three meters as it drove into the market, tearing through tables and wooden stands.

“It was definitely deliberate,” Fox said. Fox said he helped people who appeared to have broken limbs, and said that others were trapped under stands.

Dozens of ambulances lined the streets waiting to evacuate people, and heavily armed police patrolled the area. Police on Twitter urged people to stay away from the area, saying they needed to keep the streets clear for rescue vehicles.

Police spokesman Winfried Wenzel told ZDF that the suspect was arrested nearby, but offered no further details.