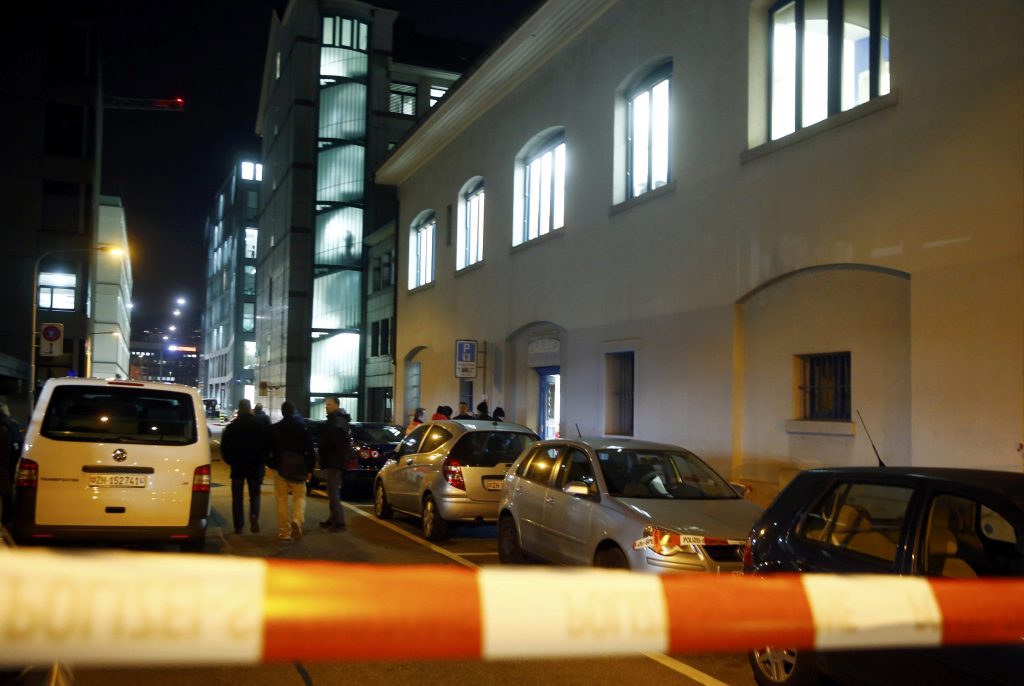 A gunman dressed in black stormed into the prayer hall of a mosque frequented by Somali immigrants and opened fire, wounding three people before fleeing, a Zurich police spokesman said Monday.

Police, who rushed to the scene in a central neighborhood known for trendy cafes, were also investigating a possible connection to the discovery of a corpse at nearby Gessner bridge over the Sihl River, police spokesman Marco Bisa said.

Authorities weren’t considering the attack as terrorism, he said. Police also said it was too early to determine whether there might be any link to an incident in Berlin also on Monday, where a truck rammed into a seasonal market, killing at least nine people.

“The unknown person fired several shots and fled from the building,” Bisa told reporters near the mosque, which was cordoned off by police. “The shooting took place inside a prayer room with several people in it. Two victims were severely injured.”

Bisa said the injured were hospitalized and were aged 30, 35 and 56 years old, but did not specify their nationalities. He said witnesses described the attacker as clad head to foot in black, and was believed to be aged about 30 years old.

At the scene, Abukav Abshirow, a 30-year-old Somali man who works at a Zurich car dealership, said his friend was among the injured. He recalled how they had been celebrating a religious occasion at the center the night before.

“I am under shock,” he said. “We’ve had great times here. The atmosphere was always friendly and happy at the center … I am very, very sad this happened. We never had problems here before. We spend the weekend here with our children in peace.”

“I am waiting to find out what happened, and who is responsible,” he said.

Attacks by gunmen are rare in Switzerland. The country was shaken in 2013 by at least two multiple-fatality shootings.

The country has a long-standing tradition for men to keep their military rifles after completing compulsory military service — which partly explains a high rate of gun ownership in the country of about 8.2 million people.