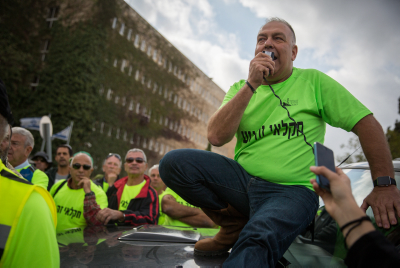 Hundreds of tractors, trucks, and farm vehicles were on their way to Jerusalem Monday morning, as farmers brought their ongoing protests against the food import policies of Finance Minister Moshe Kachlon to the center of Israel’s government. As a result, slowdowns and traffic jams were reported on many of the roads and highways from the north to the center of the country earlier Monday, with traffic problems expected to reach their peak Monday afternoon, when the farmers get to Finance Ministry headquarters – just in time for the afternoon rush hour.

Police said they would do their best to keep the roads open, restricting the slow-going farm vehicles to one lane. Even so, with the roads to and from the city usually congested even on “normal” days, police advised drivers to factor in significant additional time for their trip – or to come to the city Tuesday, if the drive Monday could be avoided. Rain forecast for later Monday won’t help either, police said.

Thousands of farmers, as well as members of Kibbutz youth groups, are expected at Monday’s demonstration. The farmers are protesting against government plans to relax or eliminate duties on a wide variety of agricultural products. The government’s decision to allow for the free import of large amounts of eggs, tomatoes, cucumbers, cheese, meat and many other fruits, vegetables and farm products “is going to kill the Israeli agricultural industry,” protesters said.

In recent months, Finance Minister Moshe Kachlon has instituted numerous changes in import policy, removing duties and taxes from butter, meat, dairy products, vegetables, and other food items. Over the previous year, Kahlon said in a report issued in September that increased duty-free imports of agricultural products had led to dramatic cuts in the price of food items. Among the discounts was a dramatic drop in the price of fresh carp, tilapia and mullet by NIS 36 a kilo; a reduction in the price of frozen tilapia to NIS 20 a kilo; a fall in the price of fresh meat by 20 percent to 30 percent, thanks to increased imports; and a reduction in the cost of cheese by 20 percent to 30 percent, also due to imports.

Duby Amitai, head of the Israeli Farmers Association, said that with its policies “the government is decimating farms and impoverishing farmers. We have come to protest not only to protect our own pocketbooks, but also the food security of Israel. Agriculture is a basic building block of Israel and we [the government] do everything we can to harm it. We are relying Turkey’s Erdogan and Hamas’s Haniyeh to deed us,” he said, referring to the importation of fruits and vegetables from Turkey and Gaza.

“We need to prevent unregulated imports and strengthen Israeli agriculture,” said Meir Tzur, head of the Moshav Movement organization at Sunday’s protest. “Instead of helping Turkey, Jordan, and the Palestinian Authority, help Israeli farmers to grow our own food instead of having to import it. Let the government reduce the cost of water, and the other expenses that make food expensive.”