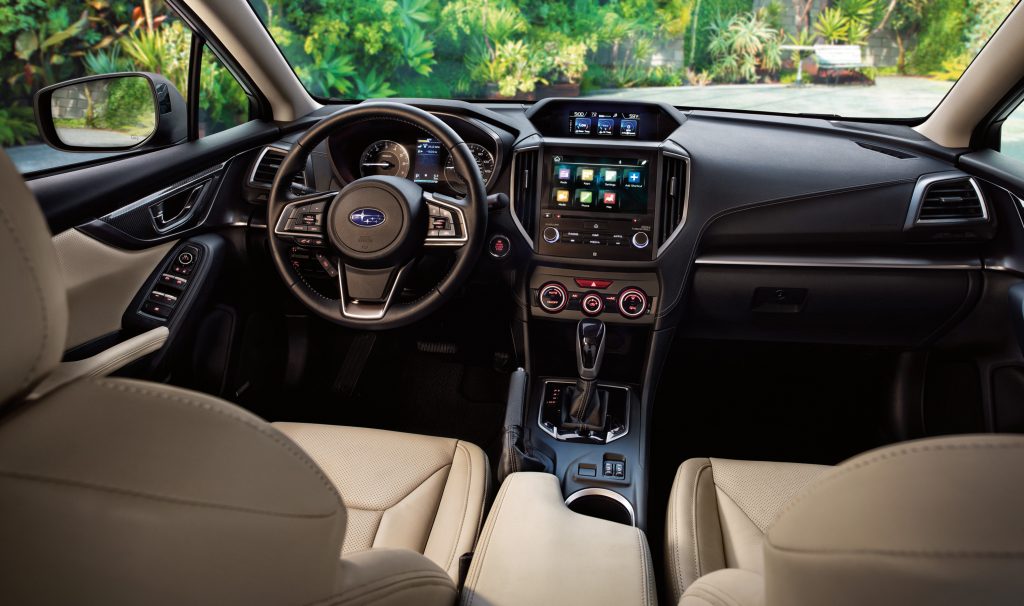 Is it my imagination, or do news producers love to terrorize us with apocalyptic pronouncements about the weather?

Maybe that’s why so many Americans buy cars with all-wheel drive, a setup that generally increases a car’s price and decreases its fuel economy.

That typical tradeoff is what makes the Subaru Impreza so compelling. For the price of a front-wheel drive compact, you can get one with all-wheel drive instead.

And in the case of the 2017 model, you can get one that’s been totally redesigned, representing the fifth generation of a car that debuted in 1993 and has since spawned two additional lines: the performance-oriented WRX STI, and the off-road-oriented Crosstrek.

Subaru’s new compact employs what the brand calls its Global Platform architecture, which is set to underpin the marque’s future offerings. The automaker says that this new platform is significantly stiffer and safer than the previous Impreza platform and, while I can’t comment on how much safer it is — I decided not to crash the car to find out — it is certainly stiffer. Nothing rattles, wobbles or vibrates when driving aggressively.

The new platform makes itself known when you toss the Impreza into a corner.

Steering is very quick on center, almost too much so. But its speed is enhanced by the car’s flat behavior in corners. The ride is firm but not bottom-bruising. While noticeably stiffer than previous Imprezas, body motions are snubbed down, with no excess bouncing after bumps. There’s some minor vibration over grooved pavement that can be felt through the steering column, but the car’s perfectly weighted feel more than compensates.

Similarly, braking response is very quick, as Subaru has reduced pedal travel, so the response is noticeably improved as the brakes strongly bring the car to a stop.

And this all takes place in a blessedly quiet cabin.

But all of it comes with a caveat. These comments apply to the Sport trim level, which has firmer damping and bigger tires. Other models have smaller wheels and more body motions, which do nothing for ride quality while lessening handling ability. They also lack the Sport’s torque vectoring, which brakes the inside wheels during cornering to enhance stability.

Its 2.0-liter four-cylinder is commendably smooth in its power delivery and is now rated at 152 horsepower vs. the old engine’s 148 horsepower. There’s enough power for the task at hand, thanks to a continuously variable automatic transmission that’s fairly responsive, stair-stepping the shifts at higher rpm like a traditional transmission. It also boasts a manual shifting mode that’s very quick and feels natural. Its behavior is flawless until you want a burst of power in a hill. That’s when its character reveals itself, bogging down until it unleashes the appropriate ratio. Thankfully, a manual transmission is still offered for those who want it, and not just on the base model, although don’t expect any in showrooms until February.

Beyond the car’s newfound athleticism and improved safety features, its cabin is notably roomier than last year. Credit the new Impreza’s added length and width compared to the outgoing model. This translates into significantly better rear seat space, although its ambience is purely bargain-basement as there are no adjustable air vents on back of center console, no rear center armrest and no USB ports. Leg room, though, is sufficient, and passengers sit comfortably high off the floor, although this comes at the expense of headroom for taller passengers.

The news is better up front, where the seats are comfortable and fairly bucketing, but not too oppressive for those broader of beam. And when you look around, you’ll find that outward visibility is excellent.

You may also notice that the trim has been upgraded, and the design has a more upscale feel despite the presence of hard plastic, particularly the radio knobs, which must be the cheapest to be found in any new car. Nevertheless, the infotainment system and its large screen and on-screen buttons are easy to read, understand and operate. The same is true of the climate control’s three simple knobs.

When it comes to utility, you’ll find ample cargo space and split folding rear seats. And if you need to haul more lifestyle debris, all models can be fitted with a roof rack.

While many automakers talk endlessly about the customers’ active lifestyle, Subaru owners truly embrace it, thanks to car that accommodates one at a reasonable price.