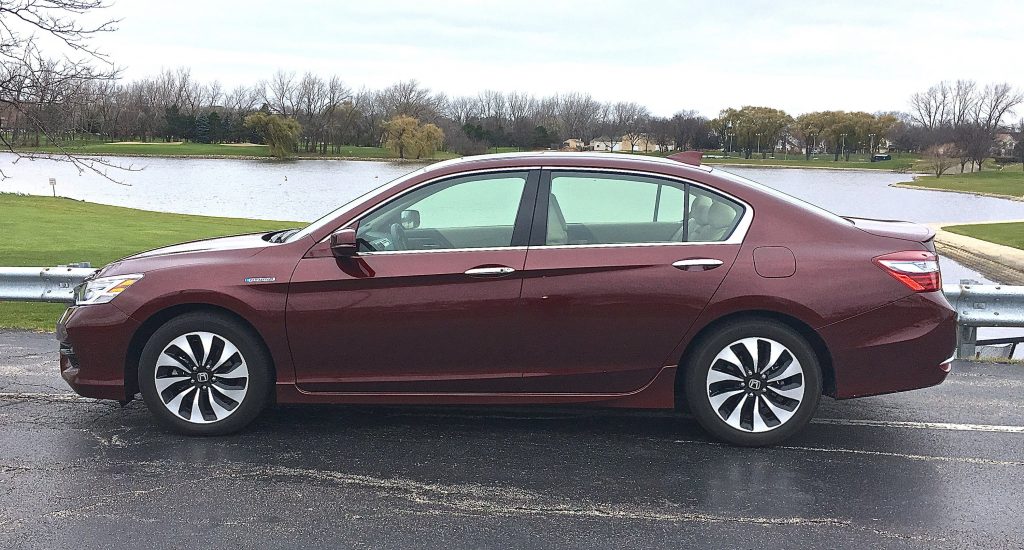 Gas prices will go up and sedans will be the most popular car segment in America again. Unfortunately for the 2017 Honda Accord Hybrid, only one of those predictions is likely.

For prognosticators who foretell a return to $4 per gallon, or for those who’d rather not spew money like emissions, the Accord Hybrid has no plugs, no pretense, and is no Prius.

We averaged 51.7 mpg in one typical commute that featured highway cruising and stop-and-go traffic. We didn’t drive any differently, only pushed a button here, moved the gear stick there.

Officially, conservatively, it gets 48 mpg combined (49 city, 47 highway), according to Honda.

Those Prius-like numbers come in a better-looking sedan than Toyota’s utilitarian fuel sipper that screams “I care more than you!”

The normal-looking sedan could be a relief to some, boring to others. There’s a special lightweight aluminum hood for the Hybrid, some new colors such as Crimson Pearl (maroon) in the tester, a bigger grille, LED lights front and back and 17-inch wheels with pinwheel caps.

The most significant update is the second-generation two-motor powertrain that, along with the 2-liter engine, produces 212 horsepower, an 8-percent increase over the 2015 model.

What this means behind the wheel is not much. There is a “Sport” button to provide a quicker boost from a stop, and a bit more punch at passing speeds. Since there is a continuously variable transmission, there aren’t traditional shift points if you’re pressing for speed, just the sustained whine of a small engine at max capacity.

Under normal driving applications, the eCVT works fine. Electric motors quietly power the car until about 20 mph, when the engine kicks on and the car is powered by both motor and engine. The four-cylinder engine takes over at highway speed, when it is most efficient.

Shifting the gear lever from D (drive) to B (brake) will recapture more energy by acting as an engine brake while coasting. Let off the accelerator and the car shrugs into heavy coasting. You’ll still need to press the brakes to come to a complete stop, but once you get used to it, there is very little braking needed.

If drivers choose to be mindful, they can reduce most around-town emissions. We parked between three to five miles from our highway commute, and once off the highway we shifted the lever to B and pressed the EV button. We consistently reached our destination from the highway without using the engine.

Other times, when we drove like we didn’t care, we got about 45 mpg for our total 30-mile commute. That’s one of the understated charms of the Accord Hybrid: with both a Sport mode and EV only mode, there are driving options to suit the driver’s mood.

In commuter applications, where highway miles and around town miles are split, hybrids are better than diesels. If the car is used as a roving business office with hundreds of highway miles logged per trip, then diesel is the more efficient option.

Diesels will have more trunk space, too.

The new Accord Hybrid battery pack is more compact, so trunk space increases 1.2 cubic feet to 13.5 cubic feet. Since the battery pack is behind and under the seat, the seats can’t fold down. We were able to fit our weekend family needs in the trunk, including a hockey bag. Two normal-sized sets of golf clubs could fit.

The interior on the premium Touring trim is more like Acura than Honda, with cream-colored leatherette seats and wood accents in the dash.

Oddly, there are two screens in the center of the Accord. The 7-inch touch screen at the top of the center stack handles audio, phone and navigation. The 7.7-inch one above it, recessed in the dash, also displays audio, phone and vehicle info. Honda does not call this double vision.

That’s not all! There’s another display in the instrument panel for vehicle info. Using all three of these information portals is confusing, as expected, but after a week we had a pretty good handle on it. Voice commands helped, but you have to be in the appropriate submenu to get it to work. To make a phone call, for instance, you can’t just say “Call Colonel Tribune” unless you are in the phone screen. He wouldn’t answer anyway.

The upper screen felt like overkill until I used the backup camera and the excellent blind spot camera that projects backward from the passenger mirror when you hit the right-turn indicator.

Even so, it seems like there would be a way to integrate the vehicle functions and cameras into one screen.

When in motion, the redundant steering controls are much more effective than the narrow buttons and the terrible volume slider on the touch screen.

There’s a lot going on in the cabin, due to all the advanced safety and convenience features, ranging from adaptive cruise control, which maintains the same distance to the car in front of you regardless of speed (over 25 mph), to lane departure mitigation, which gently torques the wheels and vibrates the steering wheel to keep you in a lane. These are the technologies that will in part enable self-driving cars. They can be deactivated, but then why get the fully loaded Touring unless there will be a range of drivers behind the wheel?

The interior of the Toyota Camry Hybrid is simpler, easier and about $5,000 less, but the Accord Hybrid is much nicer and gets a whopping 10 mpg better, which is also better than the similarly sized Prius V hatchback. The Accord Hybrid Touring costs only $1,125 more than the gas Accord and can’t be beat for midsized sedan mpg.

2017 Honda Accord Hybrid at a glance