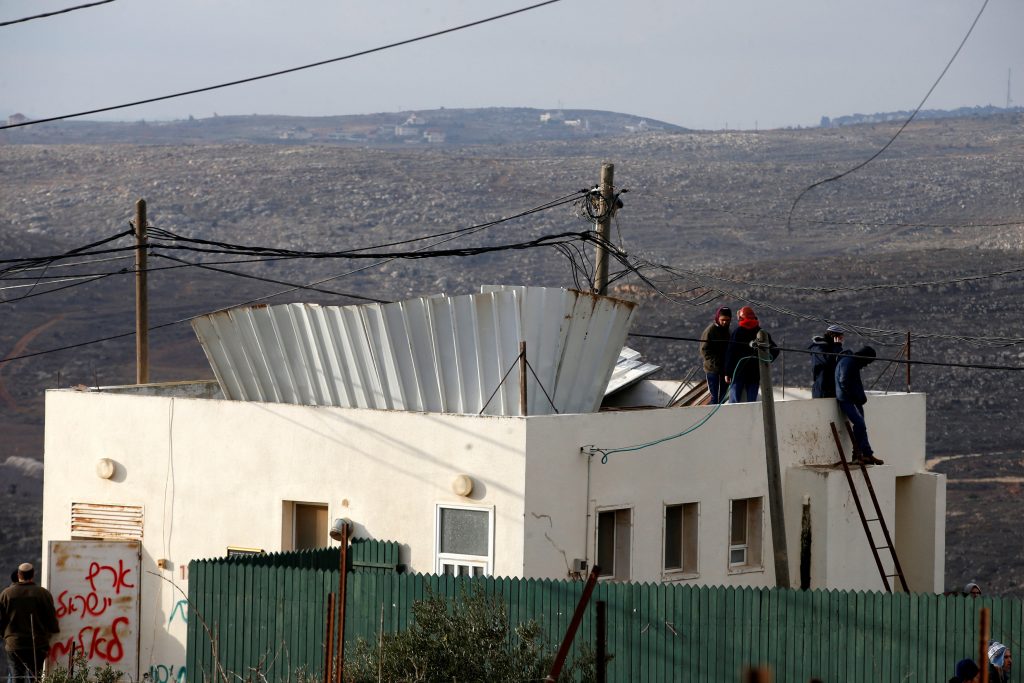 Amona residents on Sunday were considering a revised proposal offered by the government that would see them voluntarily evacuate their homes. Speaking at Sunday’s cabinet meeting, Prime Minister Binyamin Netanyahu said that the revised proposal was the best the government could offer. “We took great pains and efforts to develop this solution for Amona residents,” the Prime Minister said. “No other government has shown greater concern and care for Jewish settlement in Yehudah and Shomron.” Amona residents are expected to vote on whether or not to accept the revised deal sometime Sunday evening.

“We met with the leaders of Amona early this morning, and they will agree that we have done the maximum possible to help them,” Netanyahu added. “I truly hope that the residents will accept this proposal. This would be the right thing to do.”

The latest proposal is an outgrowth of the original deal presented last week by Education Minister Naftali Bennett to allow residents of Amona to remain on their hilltop, while complying with the orders of the High Court to demolish the homes of the some 40 families currently living in Amona. The deal entailed moving the residents to other parcels on the Amona hilltop that are currently being administered by the state under the Absentee Property Law. The evacuated residents will stay in those caravans for several months, until new homes in Shiloh that are to be built for them are ready. The area on the hilltop to be allocated to the residents consists of five large parcels, a total of 55 dunams of land.

Residents rejected that plan, claiming that it was too limited in scope, covering only 12 of the families whose homes would be demolished, and relying on “judicial procedures that have no guarantee of success,” the residents said – procedures they preferred not to rely upon. The new deal solidifies the government’s promises, providing a contract that will guarantee that they can remain in their new homes until homes being built for them in the nearby community of Shilo are ready, and doubling the number of families who will be able to remain in Amona. Government officials said that work on preparing the parcels for the caravans for the evacuated residents would begin immediately upon the acceptance of the deal by residents.

Commenting on the revised deal, Avichai Boreon, one of the heads of the Amona community, told Army Radio Sunday that residents were “considering” it. “This arrangement is much better than the one presented to us last week,” he said. “With that, there are various risks involved. We need to decide if we are willing to take those risks upon ourselves.”

Meanwhile, dozens of new people joined the 2000-some protesters who had spent Shabbos at Amona, preparing to confront police. A report in Yediot Achronot Sunday said that based on protests that occurred Sunday in the area around Amona, police were preparing for a possibly violent resistance. In a statement Motzoei Shabbos, Rabbi Yair Frank, the Rav of the community, called on all those protesting the evictions not to participate in violence.

In a notice that circulated over Shabbos, Rabbi Frank wrote that “our determined opposition to the evacuation of Amona will be displayed by passive resistance alone. It is clear to us that no one must raise a hand against police or soldiers, who are our brothers. We call on the thousands who have arrived to help to struggle, but not to lay a hand on anyone, and to avoid violence altogether.” The notice was endorsed by other Religious Zionist Rabbanim who had stayed in the community over Shabbos, including Rabbi Dov Lior, Rabbi Yaakov Ariel, Rabbi Chaim Druckman, Rabbi Shmuel Eliyahu, Rabbi Elyakim Levanon and others associated with the Religious Zionist movement.

The government has been working very hard to avoid repeats of the events of 2006. Then, police and officials of the Civil Administration evacuated and razed nine buildings in Amona, facing down 4,000 Israeli protesters in a traumatic operation that saw dozens of people, including three MKs, injured.