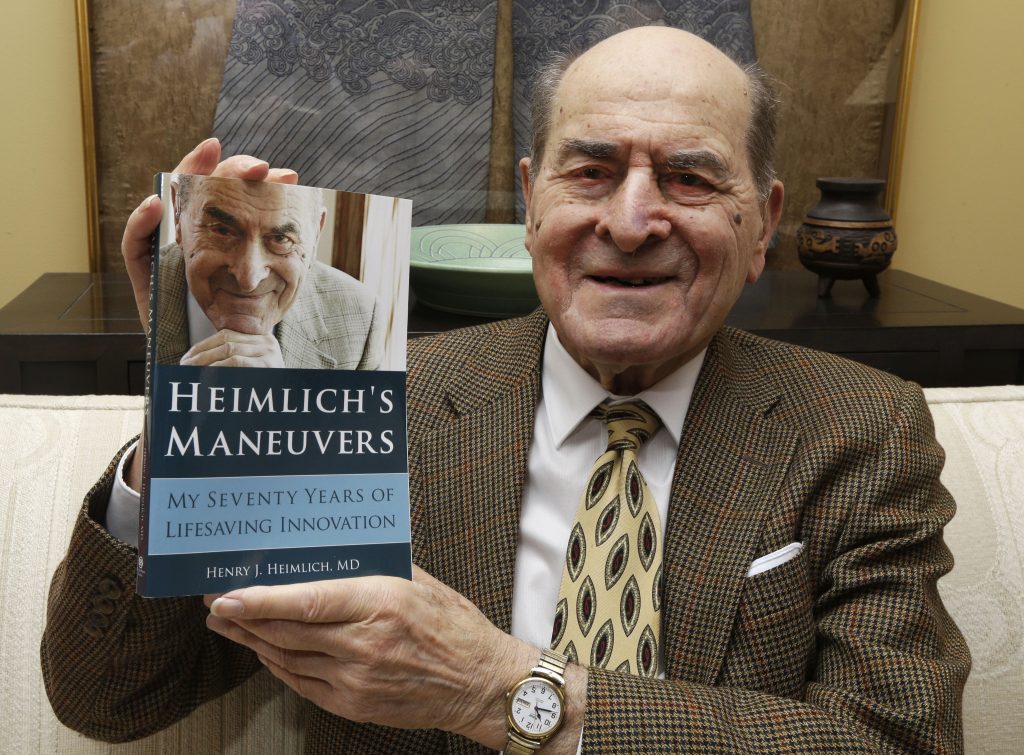 The surgeon who created the life-saving Heimlich maneuver for choking victims died Dec. 17 in Cincinnati. Dr. Henry Heimlich was 96.

His son, Phil, said he died at Christ Hospital after suffering a heart attack earlier in the week.

“My father was a great man who saved many lives,” said Heimlich, an attorney and former Hamilton County commissioner. “He will be missed not only by his family but by all of humanity.”

Heimlich was director of surgery at Jewish Hospital in Cincinnati in 1974 when he devised the treatment for choking victims that made his name a household word.

Rescuers using the procedure abruptly squeeze a victim’s abdomen, pushing in and above the navel with the fist to create a flow of air from the lungs. That flow of air then can push objects out of the windpipe and prevent suffocation.

Much of Heimlich’s 2014 autobiography focuses on the maneuver, which involves thrusts to the abdomen that apply upward pressure on the diaphragm to create an air flow that forces food or other objects out of the windpipe.

The Cincinnati chest surgeon told The Associated Press in a February 2014 interview that thousands of deaths reported annually from choking prompted him in 1972 to seek a solution. During the next two years, he led a team of researchers at Jewish Hospital in Cincinnati. He successfully tested the technique by putting a tube with a balloon at one end down an anesthetized dog’s airway until it choked. He then used the maneuver to force the dog to expel the obstruction.

The Wilmington, Delaware, native estimated the maneuver has saved the lives of thousands of choking victims in the United States alone. It earned him several awards and worldwide recognition. His name became a household word.

The maneuver was adopted by public health authorities, airlines and restaurant associations, and Heimlich appeared on shows.

His views on how the maneuver should be used and on other innovations he created or proposed put him at odds with some in the health field. He said his memoir was an effort to preserve his technique.

“I know the maneuver saves lives, and I want it to be used and remembered,” he told the AP. “I felt I had to have it down in print so the public will have the correct information.”

The maneuver has continued to make headlines. Clint Eastwood was attending a golf event in Monterey, California, in 2014 when the then-83-year-old actor saw the tournament director choking on a piece of cheese and successfully performed the technique.

“The best thing about it is that it allows anyone to save a life,” Heimlich told the AP.

In 2016, Heimlich himself was the hero, saving a woman choking on food at his senior living center.

Heimlich said the maneuver is very effective when used correctly, but he did not approve of American Red Cross guidelines calling for back blows followed by abdominal thrusts in choking cases that don’t involve infants or unconscious victims. Red Cross officials said evidence shows using multiple methods can be more effective, but Heimlich said blows can drive obstructions deeper into a windpipe. The American Heart Association backs abdominal thrusts.

Neither organization supports Heimlich’s view that using the maneuver to remove water from the lungs could save drowning victims. They recommend CPR.

Heimlich was proud of some of his other innovations, such as a chest drain valve credited by some with saving soldiers and civilians during the Vietnam War. But he drew sharp criticism for his theory that injecting patients with a curable form of malaria could trigger immunity in patients with a certain virus. Medical experts have said injecting patients with malaria would be dangerous and have criticized Heimlich for conducting studies involving malariotherapy on patients in China.

“I’ll be the first to admit that a number of my ideas are controversial and in some ways unorthodox,” Heimlich told the AP. “But I have enough guts to know that when I am right, it will come about as the thing to do, even if others do the wrong thing for a time.”

One of his most vocal critics has been his son, Peter Heimlich. The younger Heimlich split with his father years ago over a personal rift. He initially circulated anonymous criticisms of his father before openly speaking out against him online and in media interviews.

Peter Heimlich has called many of his father’s theories dangerous and spent years challenging many of his claims and trying to discredit them. The elder Heimlich maintained that his relationship with his son was a family matter and refused to comment on it to the media.

The elder Heimlich attended Cornell University undergraduate and medical schools and interned at Boston City Hospital. During World War II, the U.S. Navy sent him to northwest China in 1942 to treat Chinese and American forces behind Japanese lines in the Gobi Desert.

Beginning in the 1950s, he held staff surgeon positions at New York’s Metropolitan Hospital and Montefiore Hospital and Medical Center. He later was an attending surgeon on the staffs at Jewish and Deaconess hospitals in Cincinnati and a researcher at his nonprofit Heimlich Institute.

He is survived by two sons and two daughters.

Phil Heimlich said a private family service and burial is planned soon. The family hopes to arrange a public memorial, he added, that will give his father’s friends and admirers a chance to pay their respects.