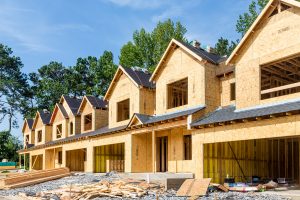 Builders pulled back on constructing homes in November, after groundbreakings surged in October to the strongest pace in more than nine years.

Homebuilders appear to be entering 2016 with renewed confidence, despite the potential setback of rising mortgage rates. Groundbreakings have risen 4.8 percent so far this year. Most of the gains came from single-family houses, as apartment construction has slipped.

“The data have been unusually volatile but, through the volatility, trends have generally been up,” said Jim O’Sullivan, chief U.S. economist at High Frequency Economics.

November housing starts plunged in the Northeast and West, while falling at a less-dramatic rate in the Midwest and South.

Building permits fell 4.7 percent last month to an annual rate of 1.20 million. During the past 11 months, permits have edged up just 1.1 percent as construction firms appear to be moving away from apartment complexes.

A healthy bout of hiring has increased demand for homes. Through the first 10 months of this year, sales of new homes are 12.7 percent higher than in the same stretch last year. The strong demand has helped lift prices, pushing the median sales price of new U.S. homes to $304,500 as of October.

The National Association of Home Builders/Wells Fargo builder sentiment index released on Thursday reached its highest point in 11 years. The index climbed seven points for December to a reading of 70. Any figure above 50 indicates that builders view sales conditions as positive. The index last reached 70 in July 2005, when the housing boom was still in full-force before a wave of subprime mortgage defaults helped trigger the Great Recession.

Still, purchasing a home has become costlier since the presidential election.

On the expectation of tax cuts, regulatory changes and higher budget deficits under President-elect Donald Trump, the yield on the 10-year U.S. Treasury note has risen. This has increased borrowing costs for consumers.

In the week ended Thursday, the average rate on the 30-year fixed-rate mortgage rose to 4.16 percent from 4.13 percent the previous week, mortgage company Freddie Mac reported. That compares with 3.57 percent in the week ended Nov. 9, the day Trump clinched the election. A year ago, the benchmark loan rate averaged 3.97 percent.