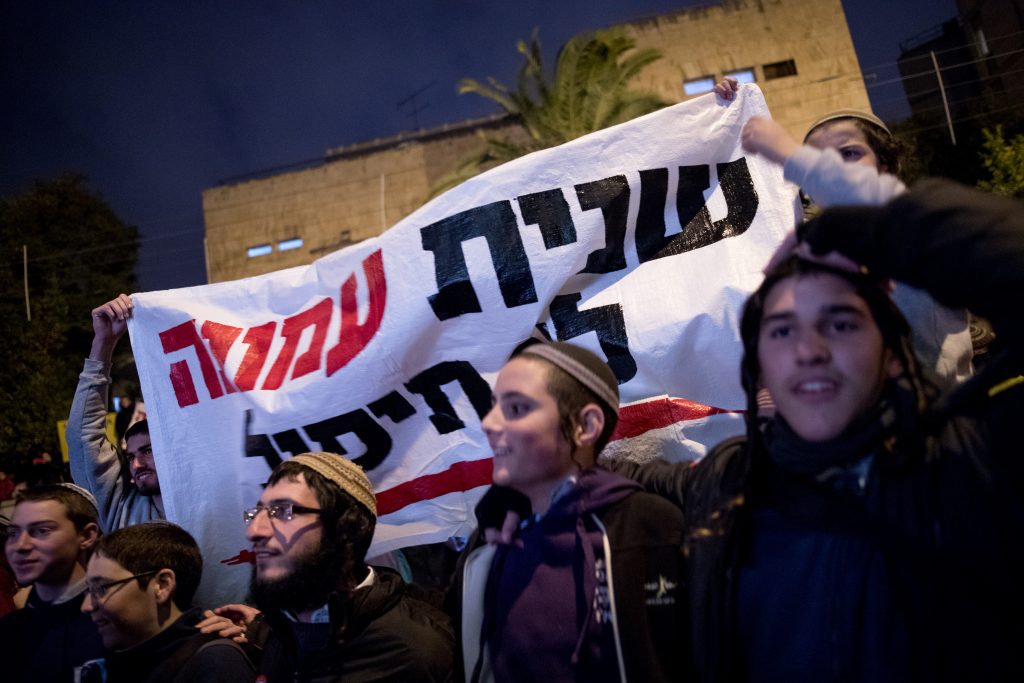 With the rejection of a deal to voluntarily leave homes slated for demolition by the state, Amona residents – as well as the government – were hunkering down for what appeared to be an almost inevitable confrontation between hundreds of demonstrators who were already in the hilltop community, and police and IDF soldiers who are determined to remove them.

Sources in the political establishment lamented the decision Thursday, but said that they had run out of options. “This was the last, best chance to avoid a confrontation, and possibly violence,” said one source quoted on Israel Radio. “We now have no options other than a forced evacuation.”

Protesters quoted in Israeli media Thursday said that they did not intend to act violently against security forces, but would not go willingly. “We are ready for a struggle,” one protestor told Channel Two. “We are expecting the expulsion as early as Thursday. This will be a passive struggle; we do not intend to raise a hand against police or soldiers. But if they want to remove us they will have to chase after us and drag us away.”

In a late-night meeting Wednesday, Amona residents decided to reject the evacuation plan presented to them Monday by Education Minister Naftali Bennett.Under the plan developed by Bennett, Prime Minister Binyamin Netanyahu and State Attorney Avichai Mandelblit, the residents were to move to five parcels of land on the Amona hilltop that are currently being administered by the state under the Absentee Property Law. The evacuated residents were to stay in those caravans for several months, until new homes in Shiloh, a community several kilometers away, that are to be built for them are ready. The area on the hilltop to be allocated to the residents consisted of five large parcels, a total of 55 dunams of land.

The state is supposed to demolish homes at Amona by order of the High Court by December 25th, and the government has been desperately searching for a way to remove the residents without generating painful scenes of Jewish soldiers and police carrying off tearful and angry children and teenagers – scenes reminiscent of the 2006 Amona evacuation.

It appeared, however, that those scenes could repeat themselves. In an official statement, Amona residents said that “in recent years we have conducted our lives with one single purpose – to remain in our homes. Our efforts have brought about a great deal of positive benefit. Because of our obstinacy, the Settlements Arrangement Law will be adopted by the government. Thanks to us, thousands of homes in Yehudah and Shomron will be saved. Unfortunately, ours will not – and our children will undergo the trauma of forced eviction.”

Most important to their decision, the residents said, is the limited scope of the solution offered, which would cover only about a quarter of the 40 families whose homes are scheduled to be demolished. “As far as the other families are concerned, the promises were very unclear. Despite our initial happiness at being presented with a rescue plan, a closer inspection of this plan indicates that it’s more like ‘Swiss cheese’ – the state does not guarantee anything, and everything is dependent on judicial procedures that have no guarantee of success.”

The residents were referring to the possibility of legal challenge to the solution offered by Bennett. The residents were to be moved to caravans on a section of the Amona hilltop that is being administered by the IDF under the Absentee Property Law, in which the government takes over administration of parcels of land whose owners are not interested in or capable of taking legal action to prevent use of their assets.  However, leftist groups have already challenged the plan, and until the Settlements Arrangement Law is passed, such challenges will still be dealt with by the High Court – which could issue an injunction barring any caravan construction on land that is now in dispute.

“If there were an explicit state guarantee that alternative homes could be built on the Amona hilltop we would have been prepared to undergo the trauma and damage to our lives by moving, in order to guarantee a Jewish presence on the Amona hilltop. But there is no guarantee that even if alternative housing is prepared for us, we will be able to remain there. We are unfortunately experienced in matters of eviction and destruction of communities,” the residents said. “We do not trust any promises that are not backed up by legal obligations, especially since the deal was originally presented with details different than what was presented to us this week.”

Throughout the day Wednesday, MKs, activists and communal leaders sought to convince the residents to accept the deal. In a statement, MK Berzalel Smotrich (Jewish Home) expressed disappointment at the residents’ decision, but said it was understandable. “With all our best efforts we were unable to promise the residents definitively that the deal would be approved by all those involved. I had hoped and believed that the residents would accept the deal but I respect their decision, and I stand amazed at their determination and bravery. They intend to continue with this determination, despite the personal cost that they will be forced to pay, and this will be a lesson to us all.” Smotrich added that he planned to be there with the residents “during their hour of bravery.”

Also expressing disappointment but support was Bennett himself. “In all failures there is the seed of success,” Bennett said in a joint statement with Justice Minister Ayelet Shaked. “We believe that even with this crisis, great things will emerge for the settlement movement, which will be strengthened.”

While the residents’ statement did not mention Bennett, his name has been denigrated among residents and supporters for proposing a deal “that turned out to be political puff and not substance,” according to one flyer distributed at a rally in Yerushalayim Tuesday night against the evictions. “The wheels of destruction are in motion, and those responsible for this are Netanyahu and Bennett. The demolition of Amona will not take place quietly, and those responsible for this will not be forgiven.”

The government worked very hard to work out a deal for Amona residents to avoid repeats of the events of 2006. Then, police and officials of the Civil Administration evacuated and razed nine buildings in Amona, facing down 4,000 Israeli protestors in a traumatic operation that saw dozens of people, including three MKs, injured. Leading the country at that time was Ehud Olmert, who was acting-prime minister after Ariel Sharon had a massive stroke in January. Both Sharon and Olmert, leaders of the Kadima party, had already shown their willingness to forcibly remove Jews from their homes a year earlier during the disengagement from Gaza and northern Shomron – and were bitterly criticized for both moves by Netanyahu, the current prime minister.

Protesters at Amona called on Bennett to leave the government. “There is still a chance he will come to his senses and end this nightmare,” one protester told Channel Two. “A government that evicts Jews from their homes has no right to be in power.”