Politics FOCUS: Trump and Ryan Learn How to Get Along – for Now
Politics 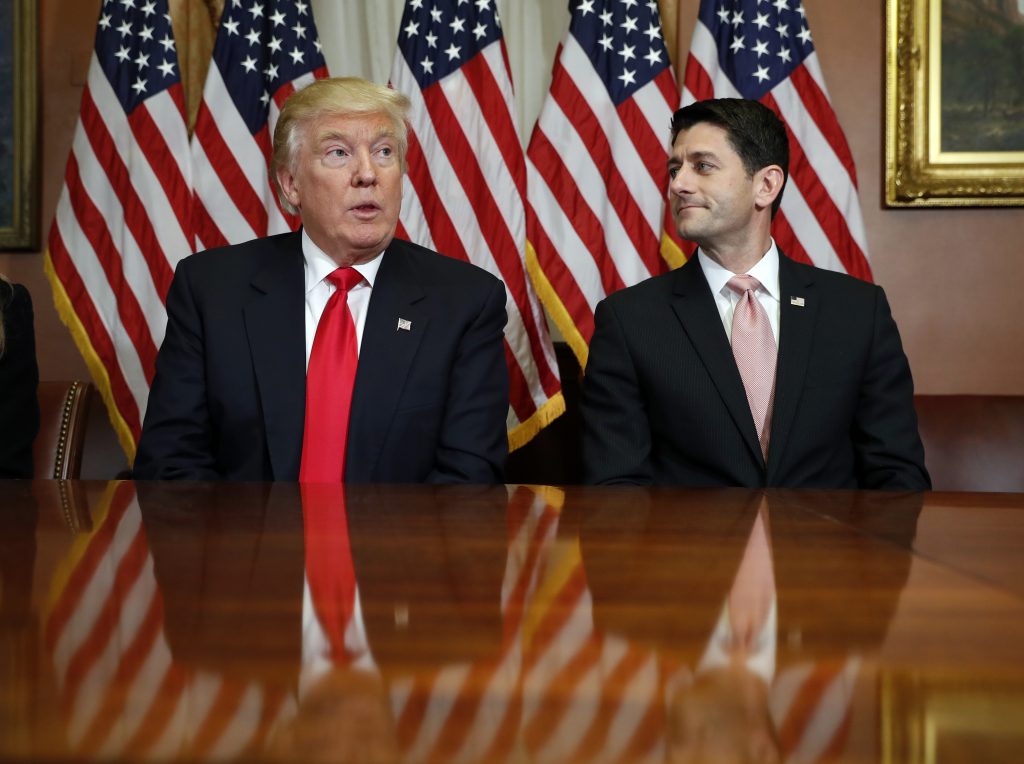 President-elect Donald Trump and House Speaker Paul Ryan have put their rocky start behind them and are learning how to get along — for now.

One key to their blossoming new friendship: Along with Senate Majority Leader Mitch McConnell, they are mapping out an agenda for 2017 that focuses on broad areas of agreement, putting off thorny policy issues that are likely to invite clashes until a later date.

Even so, Trump made clear this week that the warm embrace he now bestows on Ryan can be revoked at any time.

“Every day goes by, I get to appreciate his genius more and more,” Trump told a crowd in Ryan’s home state of Wisconsin, comparing the speaker to a “fine wine” before adding a warning: “Now, if he ever goes against me, I’m not going to say that.”

For his part, Ryan, who initially refused to endorse Trump, now brims with enthusiasm at the opportunities afforded by unified GOP control of Washington next year.

“We’re working on an aggressive timetable for 2017,” the speaker said Thursday at a forum on poverty hosted by Opportunity America think tank. “We’re right now sitting down with Sen. McConnell and the Trump administration, the transition team, to try and flesh out what we think is a realistic timetable so that we get the legislation prepped and ready to go.”

Trump and congressional Republicans plan to start the year by repealing President Barack Obama’s health care law, and then move to reform the loophole-cluttered U.S. tax code. Trump wants huge tax cuts and has largely embraced a blueprint devised by the House GOP, which envisions lower rates on corporations, individuals and investments.

The issues where Trump and Ryan may be more likely to disagree — like an enormous infrastructure bill, an overhaul of Medicare, or immigration — have been pushed to the back burner. Health care and taxes alone are likely to consume the first year of Trump’s administration and are certain to involve plenty of complications themselves, but at least Republicans start out generally in the same place.

“I think the important thing to do is focus on what we agree on, get that moving, and then make the others a work in progress,” GOP Rep. Peter King of New York said Thursday after meeting with Trump at Trump Tower. “Generally if you’re doing well and if it is moving along, some of the other issues have a way of working themselves out.”

Ryan and Trump come from vastly different political orientations. Ryan, 46, is an earnest conservative wonk, schooled in the nitty-gritty of tax and budget policy, who’s committed to core GOP principles like free trade. Trump, 70, has deviated from Republican dogma on any number of issues, went back and forth on others, opposed cutting programs like Medicare, denounced trade deals, and took stances such as barring Muslims and rounding up immigrants that Ryan repudiated.

Ryan withheld his endorsement for weeks, then bestowed it on Trump only to announce, that he would no longer defend Trump or campaign with him. Trump, in return, attacked Ryan over Twitter as a “weak and ineffective leader” and accused him of “disloyalty.”

Since Trump’s convincing Election Day victory the two have, by all accounts, put their disagreements behind them. They now speak on the phone multiple times weekly, calling each other directly on their cellphones to talk for anywhere from a couple minutes to closer to an hour, according to Ryan allies. They discuss personnel picks, though Trump hasn’t taken all of Ryan’s recommendations, as well as policy and plans.

They focus on what they want to get done and how to do it, not the areas where they’ve parted ways, like Trump’s recent call for steep tariffs on imports. And despite their differences on policy and in lifestyle, the two share an energetic approach, a desire to get things done, even a tendency to be overly optimistic about what can be accomplished.

Brandon Scholz, a longtime Wisconsin Republican operative who has known Ryan since he was elected to Congress in 1998, said Ryan and Trump quickly realized it was mutually beneficial for them to work together.

“There’s just not another path,” Scholz said. “It’s about the agenda now.”

Ryan has told Trump he will need to use the bully pulpit of the presidency to promote the House agenda. But Trump could also use that perch to prod or punish lawmakers who stray. Before the election, Ryan faced grumbles from conservatives unhappy over his criticism of Trump. As much as the two men need each other to get things done, Ryan may also need to stay in Trump’s good graces to maintain his perch atop the GOP conference.

For now Trump’s allies in the House say discontent over Ryan’s initial opposition to Trump has quieted.

“I think much of that has subsided, because we have watched Paul Ryan, who is an upstanding, honorable guy, move forward and say we are all on one team, and we have a heavy lift and we don’t have time for minutiae and petty differences,” said GOP Rep. Marsha Blackburn of Tennessee. “We have a country to save.”