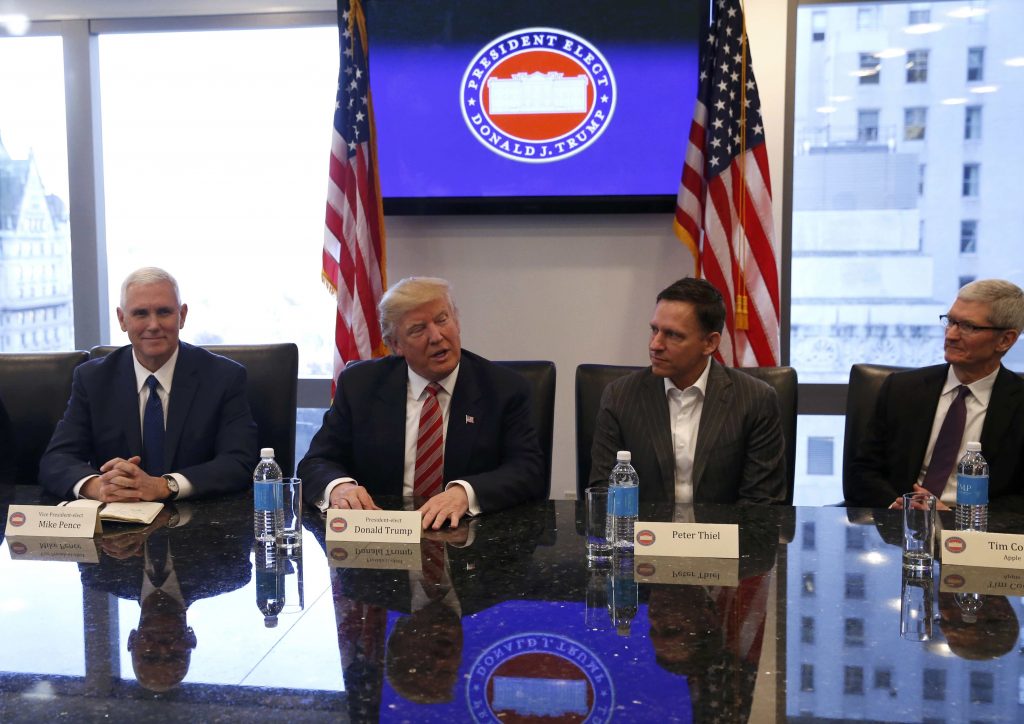 President-elect Donald Trump, who faced fierce opposition from some Silicon Valley leaders during the election campaign, strove to assure the titans of tech on Wednesday that his administration is “here to help you folks do well.”

Trump, still savoring his election victory, convened a summit at Trump Tower for nearly a dozen tech leaders, whose industry largely supported Democratic nominee Hillary Clinton. Many in the industry are worried that Trump will stifle innovation, curb the hiring of computer-savvy immigrants and infringe on consumers’ digital privacy.

He immediately tried to allay those fears.

“We want you to keep going with the incredible innovation. Anything we can do to help this go on, we will be there for you,” Trump said. “You’ll call my people, you’ll call me. We have no formal chain of command around here.”

Reporters were allowed to witness only the first moments of the meeting. Bezos, who is also owner of The Washington Post, which has been a frequent target of Trump complaints about campaign coverage, said he was “super excited about the possibility of innovation,” a comment echoed by several other participants.

No industry was more open in its contempt for Trump during the campaign. In an open letter published in July, more than 140 technology executives, entrepreneurs and venture capitalists skewered him as a “disaster for innovation.”

Separately on Wednesday, Trump officially announced his selection of former Texas Gov. Rick Perry as his secretary of energy.

Perry’s close relations with energy executives and his long-time dependence on them for political contributions likely signal an abrupt change of course at the Energy Department. He is expected to welcome the four-state Dakota Access Pipeline — which has become the center of fierce protests — and set an open-door policy for oil industry interests.

While Trump remained in his Manhattan skyscraper Wednesday, he was hitting the road Thursday for the latest stop in his “thank you” tour, this time in Hershey, Pennsylvania. The tour, which is designed to salute supporters in states that helped him win the White House, will continue Friday in Orlando, Florida, before wrapping up Saturday at a Mobile, Alabama, football stadium, which was the site of the biggest rally of his campaign.