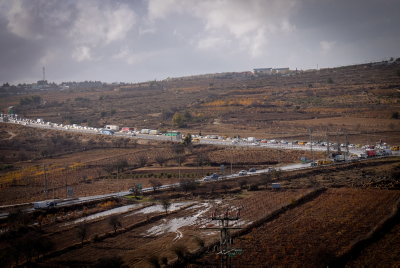 The gishmei brachah that have been falling in Israel since Monday night continued Wednesday, and they are doing Israel’s water economy much good, Water Authority officials said. As of Wednesday afternoon, the Kinneret had risen 6 centimeters in the previous 36 hours – one of the biggest single-day increases recorded.

Officials said that the flow of streams in the north was the strongest in three years. Water was also flowing in several streams that have been bone-dry in the past two years, including Nachal Sion, which has been dry for three years. Unlike last week’s major storm, in which most of the heavy rains were absorbed by the moisture-starved ground after a nearly rainless November, this week’s rains fell on ground that has been inundated with water, and thus the excess that could not be absorbed shifted to the streams.

Meanwhile, high winds brought down trees, electric wires, and loose items like lounge chairs and other backyard items. In Tel Aviv, pedestrians scattered when winds broke a window, sending shards of glass flying to the ground. No injuries were reported in that incident. Flooding shut several roads in the north, although traffic was relatively manageable in the center of the country, as the afternoon rush hour began.

Forecasters expect things to clear up overnight Wednesday, although temperatures are expected to dip to their lowest levels so far this season. Winds, too will subside. According to forecasters, the next chance for rain will be Friday – and that rain could be heavy too, as a storm develops Wednesday over Cyprus.