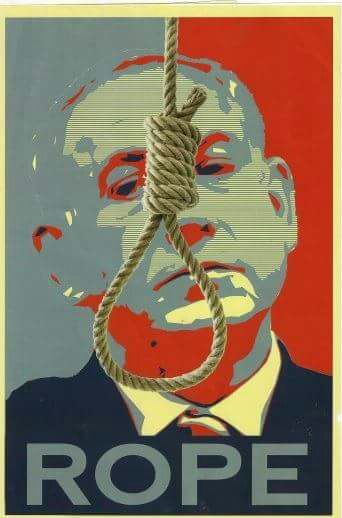 The arrest of a student at the Betzalel Art Academy who created a poster police said constituted incitement to violence against Prime Minister Binyamin Netanyahu elicited protests from an unexpected quarter – MK Betzalel Smotrich of the Jewish Home party, considered a hawk even in that right-leaning group. In a social media post, Smotrich decried the arrest, asking by what right police were holding the student.

“Have the police gone crazy?” Smotrich asked. “Why exactly did they arrest this student, the creator of this tasteless work. It’s one thing to investigate, but something else to arrest someone for speaking their mind? Is this democracy in action?”

The the now-infamous poster that was discovered at the Betzalel Art Academy in Jerusalem depicts a rope in front of Prime Minister Binyamin Netanyahu’s head, implying that he could or should be hung. The poster – which has since been removed – was apparently part of an improvised “exhibit” on incitement. Hanging on the wall near the Netanyahu poster were others, featuring statements that were cited as inciting to violence against murdered Prime Minister Yitzchak Rabin. A banner hanging next to the display read “this is what incitement looks like.” It is a takeoff on a famous poster that was issued when Barack Obama first became President of the United States, with a stylized engraving of Obama and the word “Hope” below. In the Netanyahu poster, the Prime Minister appears in the same stylized manner, with the word “Rope” displayed.

The suspect, according to police, is an 18 year old freshman student at the Betzalel Art Academy in Yerushalayim. According to her attorney, the poster has nothing to do with incitement. “She was involved in an exercise in computer graphics, and the choice of the photo and materials is coincidental,” said Attorney Rami Othman. “There was never any intent to portray or imply a lynching. The rope is not around the Prime Minister’s head. The point is that there is no hope with Netanyahu as Prime Minister, and that the nation wants hope – a perfectly legitimate political stance.”

The poster was the subject of condemnation on the left and right. Culture and Sport Minister Miri Regev slammed the poster and the institution, saying that “freedom of speech is not freedom to incite violence. Last week it was an insulting statue in the center of Tel Aviv, and now it’s a poster advocating a lynching. If this was a picture of Zionist Camp Chairman Yitzchak Herzog, someone would be under arrest right now.”

Regev called on Education Minister Naftali Bennett to cut off funding to Bezalel. In a social media post, Bennett called the poster “shameful. If these people cannot set limits for themselves, the limits will be set for them. Freedom of academic expression does not provide a license to incite to murder, or to incite against Israel. It also does not permit hurting the sensibilities of students who do not agree with political stances that differ from their professors. Israeli citizens spend NIS 11 billion a year on higher education, and it is our right to demand an end to incitement on campus.”

Herzog himself condemned the poster. “Freedom of speech is necessary and important, but there is no place for incitement against leaders of the left or right,” he said. “Especially now, as the voices of stridency increase, we need to step back and show our responsibility. This is not our way.”